The NBA playoffs are now very much in full swing as the Los Angeles Lakers fight it out with 15 other teams to find out who will replace LeBron James, Anthony Davis et al as the 2021 NBA Champions.

The first round got going on Saturday following the brand new play-in tournament which had seen the elimination of four of the initial 20 sides, and the best-of-seven series will whittle the contenders down to eight teams in the Conference semi-finals.

But how are the various series going so far, and what can we expect from Thursday night’s games? Here’s the full run-down…

The number-one seed Sixers are well in command after taking the first two games. They came from behind in a tight affair in Game 1, spurred on by Tobias Harris’ 37 points as well as 15 rebounds and 15 assists from Ben Simmons, but Game 2 was a much more one-sided affair as they turned a 14-point lead at half-time into a straightforward 25-point win with Simmons and Joel Embiid sharing 44 points. The Wizards have much to do to mount a comeback, starting on Saturday. 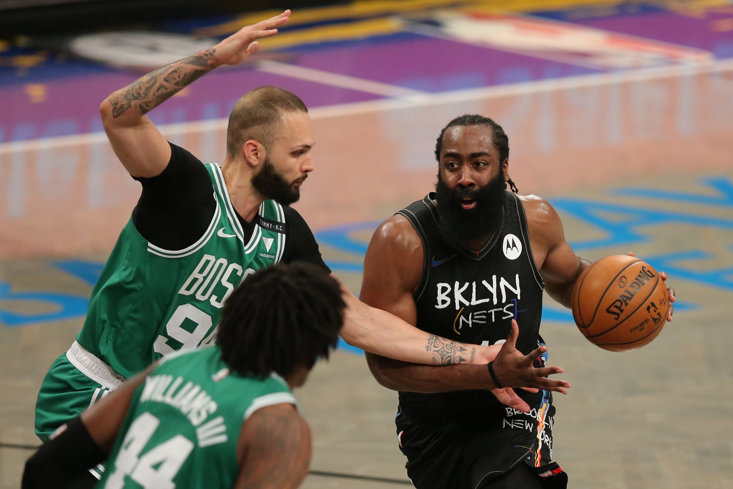 The Celtics have it all to do after finding themselves a distant second best in the opening two games of the series. Kevin Durant has been the dominant figure of the series so far, scoring 32 points on opening night then 26 more in the 22-point win in Game 2 which puts the Nets within two more wins of the Conference semis.

The to-and-fro encounter that was Game 1 gave us all hope of a nip-and-tuck series, but the Giannis Antetokounmpo-inspired 132-98 Bucks victory of Game 2 has given the tie a one-sided look heading south to Miami. The Heat will need to call on all the experience of their escapades in reaching last year’s NBA Finals if they are to progress beyond the red-hot Bucks.

A series which always looked evenly-matched has lived up to the billing so far, with both games having been in the balance until late on. Trae Young led the Hawks to a win against home advantage on opening night but Derrick Rose inspired the Knicks to a nine-point response to send us to Atlanta with all to play for.

The Grizzlies really put the cat amongst the pigeons in Game 1 with a stunning win in Salt Lake City, but the top-seed Jazz responded on Wednesday to tie the series despite Ja Morant’s franchise-record 47 points for Memphis. Utah remain the favourites, but this one might have longer to run than some would have expected. 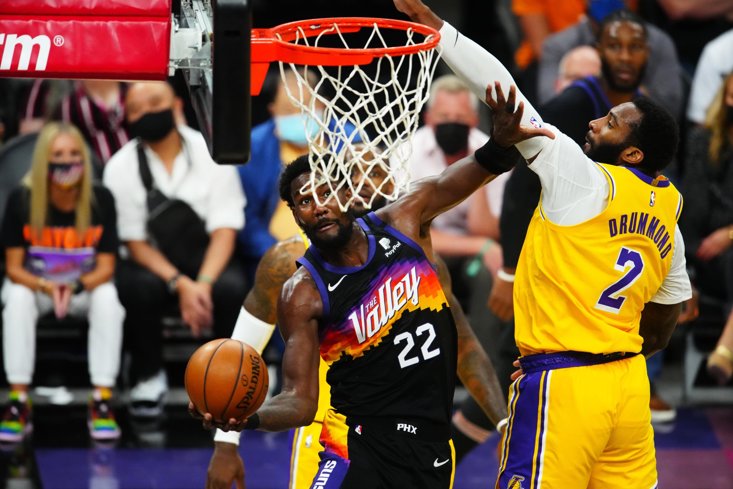 Anthony Davis was in inspired form on Tuesday as the Lakers squared the series in Phoenix despite Devin Booker’s best efforts. That came after Booker had led the Suns to a Game 1 win, but with the Lakers heading to the Staples Center at 1-1 there will be an expectation that they will take command of the series following a disruptive 2020-21 season.

Another series which could go either way, this one heads to Portland tied after the Nuggets jumped on the back of 38-point Nikola Jokic in Game 2. Damian Lillard has been in predictably great form for the Blazers so far, and if his form continues they could overturn the home advantage to progress to the Conference semi-finals.

The only team to have so far won two games on enemy territory, the Mavs are in a great position to become the first lower seeds to progress after a compelling first couple of match-ups. Luka Doncic racked up 70 points across Games 1 and 2 as the Clippers disappointed on home court, and Kawhi Leonard and his team-mates will have to up their game to get back in the series on the road.

x
Suggested Searches:
Manchester United
Liverpool
Manchester City
Marcus Rashford
Premier League
More
us-sports
The Moments That Cemented David Stern’s Legacy As The NBA's...
The late David Stern moulded the NBA into what it is today, dealing with some of the NBA’s incredible [ ... ]
us-sports
Everything You Need To Know About The Opening Weekend Of The...
The NFL season gets underway this week and the road to Super Bowl LVI starts now.  32 teams will [ ... ]
us-sports
Untold: Malice At The Palace Is Netflix’s Best Sports Doc Since...
It feels like a lifetime since those early days of the pandemic when many of us became completely obsessed [ ... ]
us-sports
NBA Draft 2021: The Trades And Stars Of The Future To Watch
Every year, America shows the world how the next-generation of athletes can be wedged into the top-flight [ ... ]
us-sports
“Special Leader” Antetokounmpo Inspires Bucks To First NBA Title...
Giannis Antetokounmpo scored 50 points as the Milwaukee Bucks secured their first NBA title since 1971 [ ... ]
us-sports
Fear The Deer: Giannis’s Milwaukee Bucks One Win Away From NBA...
The year was 1971. Disney World has opened its doors to the world. Sean Connery returned to the Bond [ ... ]
us-sports
Giannis Antetokounmpo's Incredible Block Helps Bucks Tie Up...
Sir Alex Ferguson summed it up best when he said “Attack wins you games, defence wins you [ ... ]
us-sports
Milwaukee Bucks Vs Phoenix Suns Could Be The Most Compelling...
And then there were two. This week sees the Milwaukee Bucks and the Phoenix Suns kick off their best-of-seven [ ... ]
us-sports
50 Years After Only NBA Title Win, The Milwaukee Bucks Are On...
The Milwaukee Bucks moved to within one game of their first NBA Finals appearance since 1974 with a [ ... ]
us-sports
Suns' Return To NBA Finals After 28 Years Will Be Their Best...
The Phoenix Suns are in the NBA Finals for the first time since 1993 after finishing off a 4-2 West [ ... ]
us-sports
LA Clippers Beat Phoenix Suns 116-102 To Keep Their NBA Finals...
The Los Angeles Clippers kept their hopes of a first ever NBA finals appearance alive with a 116-102 [ ... ]
us-sports
Khris Middleton Shines As Milwaukee Bucks Take 2-1 Series Lead...
Khris Middleton netted 20 fourth quarter points to turn game three on its head and lead the charge as [ ... ]
us-sports
NBA Conference Finals: Phoenix Suns To Continue Hot Streak Against...
Last season’s Disney-hosted NBA Playoffs are firmly in the rear-view mirror as this season’s [ ... ]
us-sports
Kevin Durant Display Against Bucks Cements His Place As An All-Time...
“GREATNESS,” wrote LeBron James on Twitter in the aftermath of the Brooklyn Nets’ [ ... ]
us-sports
MVP Nikola Jokic Ejected As Phoenix Suns Reach Western Conference...
They have been waiting for over a decade, but the Phoenix Suns have finally reached the Western Conference [ ... ]
us-sports
Once Second-Best To Taco Bell, Nikola Jokic Is Now The Very...
Nikola Jokic’s rise to the summit of the NBA has been like no other. The Serbian has now joined [ ... ]
us-sports
Has Father Time Finally Caught Up With LeBron James?
All great athletes have an expiry date. Muhammad Ali broke the hearts of millions as he was retired [ ... ]
us-sports
On This Day, Michael Jordan's Chicago Bulls Humiliate Utah Jazz...
The greatest defensive game of all time? Quite possibly. On this day in 1998 Chicago Bulls put on an [ ... ]
us-sports
NBA Playoffs: Lakers On The Verge Of Elimination As Jazz And...
The Los Angeles Lakers need to win the final two games of their NBA Playoff First Round series [ ... ]
us-sports
Baseball Passes Two Million Runs, But Nobody Seems To Know When!
A baseball milestone was reached on Friday night. The same landmark was hit on Saturday. And it won’t [ ... ]
us-sports
Aaron Rodgers Destined To Leave Packers As Relationship Reaches...
He’s a three-time MVP adored by his fan base, the face of the franchise in the modern era and [ ... ]
us-sports
NBA Playoffs: Your Game-By-Game Guide To Saturday's First Round...
Following a thrilling inaugural play-in tournament, NBA’s playoffs get into full swing on Saturday [ ... ]
us-sports
Turnbull No-Hitter Puts MLB Well On Course To Smash All-Time...
It would appear that 2021 is Major League Baseball’s ‘Year of the No-Hitter’. Detroit [ ... ]
us-sports
NBA Champion Lakers Host Warriors In Thrilling New One-Game...
The Los Angeles Lakers host the Golden State Warriors in a one-game head-to-head to qualify for the [ ... ]
us-sports
Brady's Buccaneers To Host The Cowboys in Week 1 Of The New...
Defending Super Bowl champions the Tampa Bay Buccaneers will begin their 2021 NFL season by hosting [ ... ]
us-sports
Utah Jazz Face Big Test Against LA Lakers In Surprise Bid For...
The Utah Jazz are the ultimate mid-level NBA team. They had great success in the nineties due to the [ ... ]
us-sports
Better Than Jordan, Tiger And Messi? Nobody Has Dominated A...
It was meant to be Tom Brady versus Patrick Mahomes. In the end, we just had further proof that the [ ... ]
us-sports
7 Up For Brady As His Super Bowl Masterclass Humbles Mahomes...
Tom Brady has done it again. The greatest quarterback in the history of the game won his seventh Super [ ... ]
us-sports
Mahomes Is The Hot New Thing, But Brady Has Made A Career Of...
Super Bowl LV is keenly poised, with the hype machine overloading on the narrative of Tom Brady vs Patrick [ ... ]
us-sports
Michael Jackson, Katy Perry And The Most Bizarre Super Bowl...
In the US last year, over 102 million people tuned in to watch the Kansas City Chiefs and San Francisco [ ... ]