You simply couldn’t write the life of Tiger Woods. A man that has seen it all, won the lot and done it again. From his outstanding start as a junior, college and amateur golfer to his dominance of the sport for a decade, Woods’ life has been more than a spectacle to most. The most famous man in the history of golf returns to where he won his first major with dreams of once again wearing a green jacket.

Before he potentially beats the odds once again, it’s worth remembering some of the times where he defied all expectations…

A true fairytale unfolded at Augusta National in 2019. After making his comeback to the sport in 2018, Tiger Woods was back on the circuit and enjoying himself. He got close to major glory that year, with a sixth place finish at Carnoustie in the Open and a second place at the PGA Championship. A win at the second-ending Tour Championship gave him a FedEx Cup win, ending his five-year drought without a win.

He kept up his good form throughout the start of the 2019 season. The Masters came up on the calendar and he found himself shooting a 70 to start his tournament off. On Friday he delivered a 68 to take him to six under par and finished his Saturday exploits just two shots behind Francesco Molinari, the clubhouse leader going into the final round.

A first nine behind the Italian leader subdued too much excitement, before Molinari found the water twice, forcing two double bogeys within three holes. Woods holed a birdie on 15 to separate himself from the leading pack, followed by another on the 16th hole to make sure of his commanding lead. The parade began, with fans surrounding the final two holes waiting for golf’s prodigal son to return to the top of the sport.

With a bogey on the final hole, he beat out Dustin Johnson, Xander Schauffele and Brooks Koepka, who shared second place. He became the second oldest winner of a green jacket and it was his fifth in total. It was the comeback of comebacks, regarded by some as the greatest in any sport of all time. The footage of Tiger and his sons’ embrace after winning has been seen over two million times on Twitter alone.

The unwritable script was written that weekend, and the 2022 Masters sees just as dramatic of a return for Tiger. 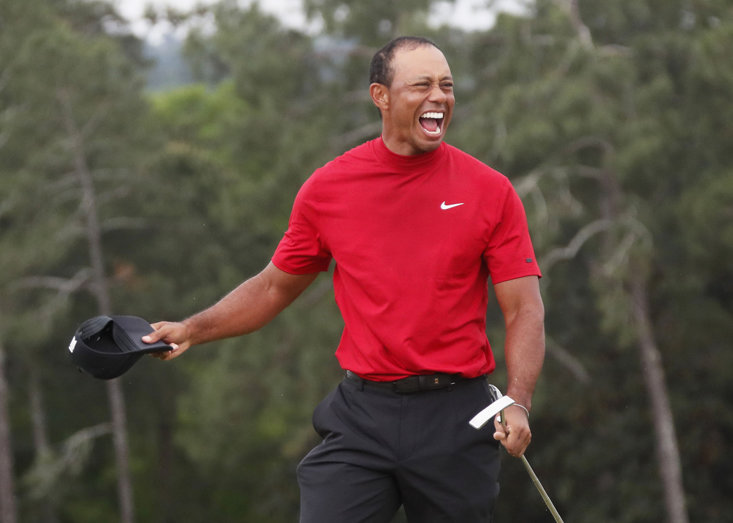 Torrey Pines played host to the US Open, a famously difficult course and the longest to ever host a major championship. Tiger was returning to the course after receiving arthroscopic surgery on his left knee after a difficult runner-up finish at The Masters that  same year.

The crowd can be forgiven for thinking that his limping around the course was a bit of an act to gain sympathy or add a bit of reason to his performance. He even slipped on the cart path during his second round out, damaging the leg even further (spectators could hear it crack), but still made a birdie on the same hole.

This was a momentous weekend for Tiger; it was his first Father’s Day since the birth of his daughter Sam that was spent away from home over on the coast of San Diego. He started every round except the second with a double bogey on the first hole. The US Open was introducing future stars like Martin Kaymer, Dustin Johnson and Rickie Fowler, and Australian Stuart Appleby kept up the heat on the first two days before the frontrunners emerged in Tiger, Lee Westwood and Rocco Mediate.

In the end, the four day event turned into five days with Woods and Mediate eventually going to an 18-hole playoff. We won’t ever see stakes as high nowadays as the Open changed their rules to make sure that there are only three holes in a playoff, rather than coming back the next day to play a full round.

The playoff was the most watched golf event on American TV at the time. It was a tense affair to say the least. Mediate finished the front nine two over par, trading the lead three times before a capitulation from both men. By the 13th tee, Woods was two over with Rocco a shot behind. They both birdied the long par five 13th hole, Mediate continued and made it three birdies in a row and sat at even par.

Tiger couldn’t find a birdie to draw level, struggling further and further with his injury. The final hole saw an incredible birdie that meant that we were going again, before yet another playoff on the seventh hole where Mediate dropped his chance by bogeying, before Tiger made par and sealed his final major of the noughties.

Two days following his dramatic win, news of his injury was revealed. During the rehab stages post-surgery two months earlier, he suffered a double stress fracture of his left tibia. He missed the rest of the 2008 season, with surgery being undertaken to repair his anterior cruciate ligament and fix his broken leg 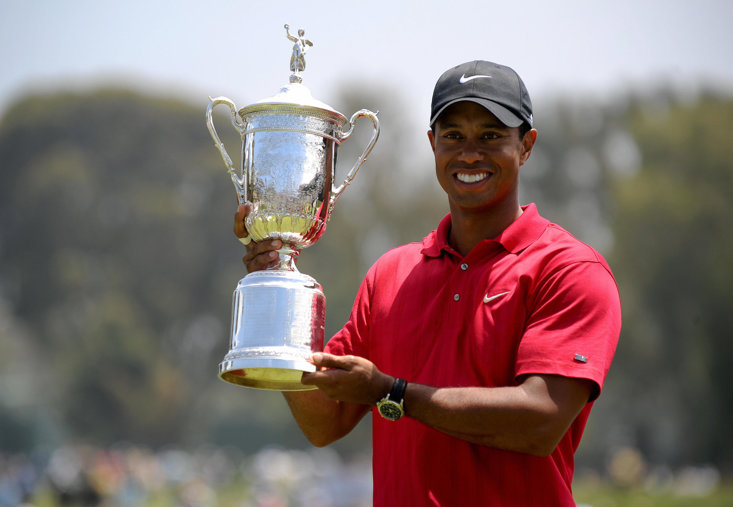 The British Open visited Hoylake in 2006, a course with plenty of wind, horrendous rough and a tight snaking layout on the Wirral. The world’s finest arrived in Merseyside but for Tiger it was different. Earl Woods, Tiger’s father, had just passed away.

Earl was the man who taught Tiger how to play golf and used a wide range of mental techniques to teach him how to get past distractions on the course and become the aggressive winner we all know. The father-and-son duo spent countless hours on the courses since he was just able to walk. He attended almost every event and although their relationship had moments where it strained, Earl was Tiger’s best friend for most of his life.

The Open was the first major tournament win Tiger had after the death of his father, and it was never going to be easy. Royal Liverpool is an incredible course in the sense that, apart from its six dune holes, it’s flat and open, with the wind from the sea ready to ruin any shot that dares hang in the air. Tiger only hit his driver once in that entire week of golf, something pretty much unheard of for him.

Tiger finished that week having become the first player since Tom Watson in 1982 and 1983 to win consecutive British Opens. He held off Chris DiMarco, Ernie Els, Jim Furyk and Sergio Garcia finishing 18 under par, one off the record for lowest winning score in a major.

It was an emotional affair at Hoylake. The final hole saw a composed Tiger break down into the shoulder of his then-caddy, Steve Williams, who embraced him before he went down to the clubhouse to lift the Claret Jug.

Tiger Woods is 66/1 to win The Masters with Betfred*

x
Suggested Searches:
The Sportsman
Manchester United
Liverpool
Manchester City
Premier League
More
golf
Everything You Need To Know About The 2022 PGA Championship
‘This is Major’ is the PGA’s chosen slogan for their flagship major event, as the [ ... ]
golf
Betfred Donate £19,000 To Prostate Cancer UK After Danny Willett...
Thorbjørn Olesen may have walked away with the Betfred British Masters title over the weekend, [ ... ]
golf
Betfred British Masters: Thorbjorn Olesen Triumphs With Spectacular...
Thorbjorn Olesen clinched the Betfred British Masters title with an incredible 35-foot putt on the 18th [ ... ]
golf
Thorbjorn Olesen Three Clear Heading Into Final Day Of Betfred...
Following a miserably wet Friday, the sunshine returned to The Belfry on Saturday as round three of [ ... ]
golf
Hurly Long And Danny Willett Shine On Day Two At Betfred British...
It was another action-packed day at The Belfry in Sutton Coldfield for day two of the Betfred British [ ... ]
golf
Great Danes Enjoy Profitable Opening Day At Betfred British...
If watching Christian Eriksen run the show in the Premier League wasn’t enough, now several other [ ... ]
golf
Everything You Need To Know About The Betfred British Masters
The British Masters is upon us and Danny Willett has chosen The Belfry again as the host for one of [ ... ]
golf
Phil Mickelson Plays Both Sides As Golf’s Civil War Begins
Phil Mickelson, American golf hero and people’s champion left many fans flabbergasted by [ ... ]
golf
Lazarus With A Five Iron: Tiger Roars Back At The Masters On...
On April 14 2019, the weather was looming ominously in Augusta, Georgia. The only thunder that ultimately [ ... ]
golf
Scheffler Shines, Rory Reborn & Tiger Returns: 5 Things We Learned...
Scottie Scheffler's stunning season continued this weekend as he clinched the first major of his [ ... ]
golf
The Masters Best Picks And Tips: Can Tiger Woods Live The Dream...
Tiger Roll might’ve called it a day after Cheltenham, and Subway might’ve called time on [ ... ]
golf
25 Years On: Remembering When Tiger Woods Became The Masters’...
Way before his slams, his swings and scandals, Tiger Woods paved the way as a phenom in the world of [ ... ]
golf
Everything You Need To Know About The 2022 Masters Tournament
The famous green jacket is up for grabs once again as the golf world descends on Augusta, Georgia for [ ... ]
golf
Where? When? How To Watch? Everything You Need To Know About...
One of the highlights of the golfing calendar arrives next week in the form of the sport’s “fifth [ ... ]
golf
Five Of The Best UK Golf Courses You Can Play For Under £100
The majority of UK golf courses we see the likes of Bryson DeChambeau, Rory McIlroy and Jon [ ... ]
golf
IN PICTURES: Five Of The Most Beautiful Golf Courses In The...
Widely regarded as one of the best looking golf courses man has ever crafted, Pebble Beach in California [ ... ]
golf
Drama Surrounding Saudi Super Golf League Could Rumble On For...
Although this feels like an idea which has just been ignited, the concept of a breakaway league in golf [ ... ]
golf
Why The DP World Tour Will Help European Golf
As the PGA Tour came to a close before September’s Ryder Cup, the European Tour has entered its [ ... ]
golf
USA Complete Ryder Cup Annihilation As Cantlay And Scheffler...
The USA regained the Ryder Cup on Sunday, finishing off a convincing exhibition of matchplay golf by [ ... ]
golf
Team USA Dominate Day Two Of Ryder Cup Leaving Europe With A...
Team USA stretched their lead to 11-5 on day two of the Ryder Cup at Whistling Straits after another [ ... ]
golf
Ryder Cup Pairings 2021 Day One: Rahm And Garcia Eye Up Titanic...
The Ryder Cup pairings have delivered once again. Europe will start by sending out world number one [ ... ]
golf
Everything You Need To Know About The 2021 Ryder Cup At Whistling...
The 2021 edition of the Ryder Cup begins on Friday a whole year after its initially scheduled start [ ... ]
golf
Will Shane Lowry Make It? Europe's Ryder Cup Qualifying Race...
The Ryder Cup kicks off later this month at Whistling Straits and Europe’s men will be hoping [ ... ]
golf
Kids In America: Rookie Duo Maguire And Castren Fire Europe...
The old cliche that youth has no fear is often thrown about in sport, but we saw just how nerveless [ ... ]
golf
Cantlay, DeChambeau Or Rahm To Win? All You Need To Know On...
The PGA Tour heads to the home of some of golf’s most breathtaking courses, Atlanta, with East [ ... ]
golf
Everything You Need To Know Ahead Of The 2021 Solheim Cup
The 17th edition of the Solheim Cup, one of the most prestigious events in golf, gets underway this [ ... ]
golf
Kevin Kisner’s Wyndham Win Shows His Importance To Team USA...
Golf’s showpiece team event, the Ryder Cup, is just over a month away as Team Europe prepare to [ ... ]
golf
Golf's Sibling Superstars Minjee Lee And Min Woo Lee Are Taking...
On Sunday, Australian golfer Minjee Lee overturned a seven shot deficit to beat South Korea’s [ ... ]
golf
Unflappable Collin Morikawa Wins The Open Championship After...
American Collin Morikawa has won the Open Championship’s Claret Jug for the first time after a [ ... ]
golf
Oosthuizen Holds His Nerve To Take One-Stroke Lead Into Final...
Louis Oosthuizen proved once again that he should never be underestimated, as even with a subpar performance [ ... ]