Motorsport
News
Lewis Hamilton locked up when his title rival was already out of the race
Conor Keane
16:02, 06 Jun 2021

Lewis Hamilton and Max Verstappen were left heartbroken after a last gasp lock up and a tyre failure caused the pair to crash and cast a significant dent to both their title hopes.

Until today, for 54 consecutive races, Hamilton had always finished in the points. In what is already proving to be his toughest test in many years, it seems that the pressure could be getting to Hamilton as he looks to beat Schumacher’s record of seven Driver’s Championships.

With those two out of the picture, Red Bull’s Sergio Perez claimed first after a thrilling finale which saw the race restarted with just two laps to go, with Sebastian Vettel in finishing second and Pierre Gasly in third. It was Perez’s second win at the Azerbaijan Grand Prix and his first since joining Red Bull.

Hamilton will be thankful he did not lose ground on Verstappen in the points table but he will be devastated at the missed opportunity for leaping ahead himself had he managed to win the race. Both drivers will be looking back at this race as the one that got away and could prove to be a massive ‘what if?’ for either one of them at the end of the season. Although the Brit will be furious with his mistake, it is positive for the fans that the title won’t be decided because of a tyre failure.

Verstappen’s late crash caused the red flag to be waved and the race was paused with two laps to go with teammate Sergio Perez leading Hamilton. The 180mph crash occurred on the same straight that Canadian Lance Stroll had also crashed on earlier in the race in a similar situation with a rear tyre. Both drivers had Pirelli tyres and for two similar incidents to occur in the same race with the same manufacturer is unacceptable. Pirelli will have questions to answer following the two incidents in Baku and Red Bull will be infuriated at what it has cost them in the title race.

Stroll told Sky Sports: “We have to look into it, I don’t know exactly what happened.

“It was going quite good, we were over cutting the field. It was a big opportunity today but we’ve been unlucky.” 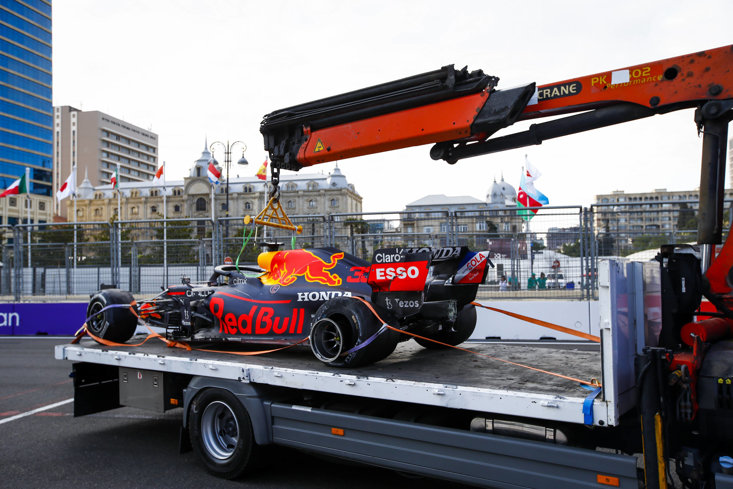 The race came down to a two-lap showdown with everyone waiting in the pits, outside their cars waiting for Verstappen’s car to be removed from the track. Hamilton was second for the standing restart but ran wide into T1 and out of the points, finishing 16th.

After securing his first victory for Red Bull, Perez was delighted. He told Sky Sports: “I’m so happy for today.

“Normally Baku is pretty crazy, I have to say sorry to Max (Verstappen), it would have been incredible to get that one-two for the team. But at the end, it was a fantastic day for us. We were close to retiring the car but luckily, we managed to finish the race.

“This is definitely a strong boost of confidence for myself and the team.”

Verstappen showed his class considering how disappointed he was at leading the race for so long. He was seen watching his teammate on the top step, congratulating him.

Another happy driver on the podium was Vettel. He had an amazing race for Aston Martin, achieving their first podium since and was rolling back the years in Baku as the four-time Championship winner deservedly finished second.

After the race he told Sky Sports: “A great day. I’m over the moon. We were not expecting a podium here.”

Nobody could have foreseen the top three ahead of this weekend, and this sort of drama proves exactly why we love this sport. Who said Formula One was too predictable?