This is the weekend it all could’ve gone wrong for Manchester City. They had to travel to the home of the champions whilst nearest rivals Manchester United had the chance to draw level on points and pile the pressure on Pep Guardiola’s side ahead of their Anfield visit.

They’ve ended the weekend five points clear having dumped Liverpool out of the title race and with the Premier League title now surely returning to the Etihad.

Their 4-1 win at the home of the champions not only took the title away from Jurgen Klopp’s side but sent out a statement to the rest of the Premier League. After Man United let two points slip in the 95th minute against Everton on Saturday night, City bounced back from Mo Salah’s penalty equaliser to assert their dominance at the summit of English football, winning at Anfield for the first time since 2003. That is the true mark of champions.

This was a different Manchester City, one so used to dominating possession and playing passes to move the opposition around have now evolved under Pep Guardiola into a defensive unit who are happy to absorb pressure, as they did in the first half, before showing their brutal ruthlessness in the second 45 as they took advantage of two embarrassing Alisson mistakes to take the game away from the Reds. 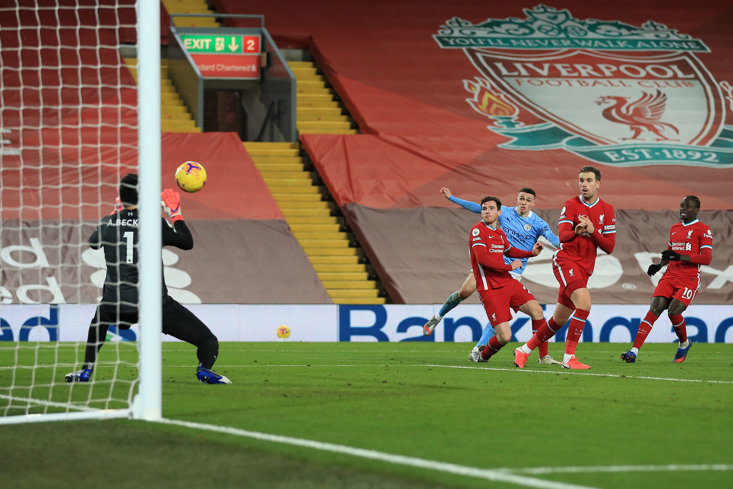 For Liverpool, it has been a tepid title defence. They waited 30 years for a title, and lost it in the space of the last three weeks.

Phil Foden put in a phenomenal display which marked his arrival as a top Premier League player. He has shown promising talent in spells over the past year or so, but in this game he was almost unplayable and crowned his performance with a thumping finish having cut in on his left foot from the right-hand side. The sheer velocity of his shot beat Alisson, who had a game to forget and was clearly at fault for City’s second and third goal.

The first half looked like heading the same way as most top games this season until Raheem Sterling drove into the box and was tripped by the trailing leg of Fabinho. The in-form Ilkay Gundogan stepped up and surprisingly slammed the ball over the bar from 12 yards, reminiscent of Riyad Mahrez’s penalty miss at Anfield in the 2018-19 campaign. In fact, four of the past six penalties to completely miss the target in the Premier League have been taken by Man City players.

The German midfielder, and City themselves, bounced back from that disappointment with a close range finish in the second half after another driving run from Sterling forced Alisson to spill a shot. It looked as if City would rely on a combination of their rock-solid defence and Liverpool’s blunt attack to take all three points, but that changed when Mo Salah converted a penalty after being tugged back by Ruben Dias.

But it was all City from then on in. Alisson looked as shaky as we have seen him since signing for Liverpool, throwing the game away in a five-minute spell that was completely out of character. He fluffed one clearance to Fabinho but got a second chance, only to send the ball straight to the feet of Foden. The young Engilshman made him pay, setting up Gundogan for his second after a cutting forward run, and just three minutes later Sterling put the game out of sight.

Alisson this time passed the ball straight to Bernardo Silva, who dinked the onrushing keeper for Sterling to head home on the line. Foden put the icing on the cake with the fourth, and while the youngster will rightly gain plaudits, this was the weekend Manchester City must have dreamt about.

“[Foden] is a guy who keeps the ball really well, so aggressive arriving," said Guardiola told Sky Sports afterwards. "But he is so young, still in some positions he doesn't understand what he has to do. So in the first half he was not in the right position he has to be... When playing wide it is easier for him, but he will learn. After that, the action for the second goal and the fourth goal, we know what a huge talent he is.”

Jurgen Klopp, meanwhile, rued Liverpool's errors. "We make two massive mistakes. It is clear, everybody saw them, and they used them," he said. "That is tough to take, then Foden [finishes it] with a genius situation when he scores the fourth goal.”

With this spanking, Guardiola’s men embarrassed the champions, putting the final nail in Klopp’s title defence and likely won back the Premier League title. City may not be the same team we saw two years ago, but in a season in which there were so many contenders they have now won their last 10 in the league and are 21 unbetaen in all competitions. Barring miracles, they will be champions once again. 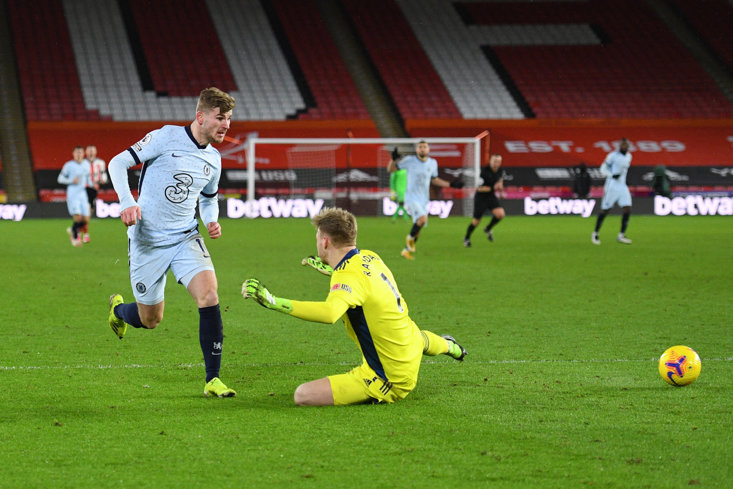 Liverpool's bad day got worse as Chelsea continued their improvement under Thomas Tuchel in the late kick-off, moving to within one point of the fourth-placed Reds with a 2-1 win against bottom club Sheffield United. Mason Mount opened the scoring with a brilliant low drive from outside the area before Sheffield United got back on level terms thanks to a comical defensive blunder. As Edouard Mendy rushed out to kick the ball, Antonio Rudiger knocked it past him and into the empty net.

It was the Blades' free pass back into the game, but they soon gave it away with a similar dose of generosity as Aaron Ramsdale cleaned out the lively Timo Werner for a stone-wall penalty. Jorginho converted to move Chelsea another step closer to the Champions League places. Sheffield United, despite their improved recent form, now find themselves 12 points from the safety mark following their 18th league defeat of 2020-21.