Boxing
News
All the action from the Joseph Parker vs Derek Chisora undercard in Manchester
Joey Mills
22:17, 18 Dec 2021

Zelfa Barrett has put himself in line for a world title shot in 2022, after winning his IBF super featherweight title eliminator with the fearless Bruno Tarimo. The fight followed a familiar pattern for all twelve rounds. The brave Australian poured forward relentlessly, a buzzing hub of activity that forced Barrett to work for every minute of every round. Barrett’s quality and power gave him a clear lead on the scorecards though, and he is now next in line to meet champion Kenichi Ogawa.

The once-beaten ‘Brown Flash’ boxed on the back foot, switching between orthodox and southpaw as he popped away with hooks to head and body. Tarimo was eating a lot of solid shots, but would always respond in kind. He hit the canvas in round three, but never looked unduly troubled beyond that. Tarimo was outboxed, but unbowed. Barrett did a professional job against a determined opponent, and these twelve rounds will stand him in good stead for the opportunities to come.

Late substitute Kevin Lele Sadjo upset the applecart, and the crowd, by crushing local lad Jack Cullen with a brutal body shot to claim the European super-middleweight title. ‘The Little Lever Meat Cleaver’ was cut but in control going into the halfway stage of the fight. When Cullen chose to use his height advantage to box at range, he dominated the fight. But Sadjo, a two-week replacement after Emre Cukur pulled out, never stopped throwing punches as he advanced forward.

Cullen was working hard but had one of his best rounds in the fifth, and looked to be breaking the resilience of ‘The Phenomenon’. In the sixth stanza though, he walked onto a sickener of a body shot and was stopped in his tracks. The Manchester crowd booed as Sadjo celebrated wildly, including some ill-advised push-ups, but luckily the beaten fighter was okay. Cullen now faces a long road back to contention after this shock result.

Unbeaten super-middleweight Lerrone Richards took a huge step up in class, winning an impressive split decision over Carlos Gongora. The former British, Commonwealth and European champion was the clear winner despite the opinion of one judge, and can now add the IBO’s lightly-regarded version of the world crown to his growing list of accomplishments.

The fight was cagey throughout, with Richards working well behind the jab. Gongora, now 20-1, carried the power but did not administer it often enough to trouble the new champion. ‘Sniper The Boss’ switched from head to body almost artistically at times, and this slick work helped him resist Gongora’s flurries in the fifth and ninth rounds. The IBO title can be a stepping stone for Richards and, after easing past a world-ranked opponent, he can use it to secure even bigger fights going forward. 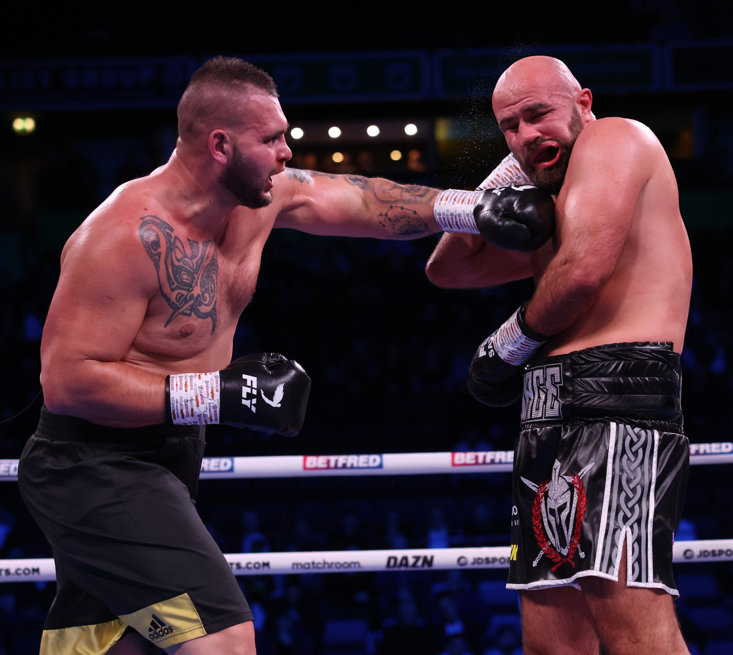 The pick of the undercard from an entertainment standpoint saw Alen Babic rack up the tenth straight stoppage of his career, when he knocked out Frenchman David Spilmont in six rounds. The brave journeyman was expected to be light work for the ambitious Babic, who is targeting a shot at WBC bridgerweight champion Oscar Rivas next year. Instead, the Croatian crowd favourite found himself badly hurt in the second round of a thoroughly rousing contest.

‘Savage’ started as expected, scoring well with his left and punctuating the first round with a big right hook. The second saw him shaken to his boots by a crunching Spilmont left. The favourite doubled-over, and finished the round under heavy fire as the bell saved his unbeaten record. In the third round, it was Spilmont’s turn to end up on the verge of defeat but he also survived. The underdog was down in the next round, and slowly but surely found himself broken down by Babic. The popular Croat was some way short of his best, but eventually got the job done in the sixth with a series of clubbing shots in answer to a final volley from Spilmont.

The opening fight of the main card was a short one. Cruiserweight David Nyika moved to 2-0 when Anthony Carpin pulled out after one round with an arm injury. Nyika dominated the one completed session, hurting his French opponent early and stopping just short of securing a more decisive finish as the bell rang to end the round. Job done for the Olympic bronze medalist, but he needs sterner tests than this.