A Team GB gold medallist has turned professional, Mike Tyson doesn’t look like he’ll be returning to the ring any time soon and Natasha Jonas is stepping up three weight classes for her next showdown. Here are five stories you might have missed across a busy week of boxing.

The 29-year-old, who won gold in Japan at flyweight, will make his maiden professional appearance on the undercard of Lawrence Okolie's WBO world title defence against Michal Cieslak in London on 27 February.

"The goal now is to win a world title. I know there's not many who have won gold then a world title so hopefully I can add my name to that list," Yafai said.

"There's some great current world champions out there at the minute, I'm not going to call out any names but my time will come - I have set my sights on being at the very top.”

Former heavyweight champion Mike Tyson says he’s unsure if he’ll ever return to the ring, despite rumours linking him with a number of potential opponents including Jake Paul and his brother, Logan Paul.

Tyson, 55, returned to the ring at the tail-end of 2020 against fellow boxing great Roy Jones Jr, in a bout dubbed ‘Lockdown Knockdown’ which was scored a draw. ‘The Baddest Man on the Planet’ says that money ruined the fun for him.

“I don’t think I’d ever just do stuff like that anymore. I wanted to do it the first time just for fun, just to have fun,” Tyson told FULL SEND Podcast.

“Then some people took it to another level and made it financial and the fun went out of it.” 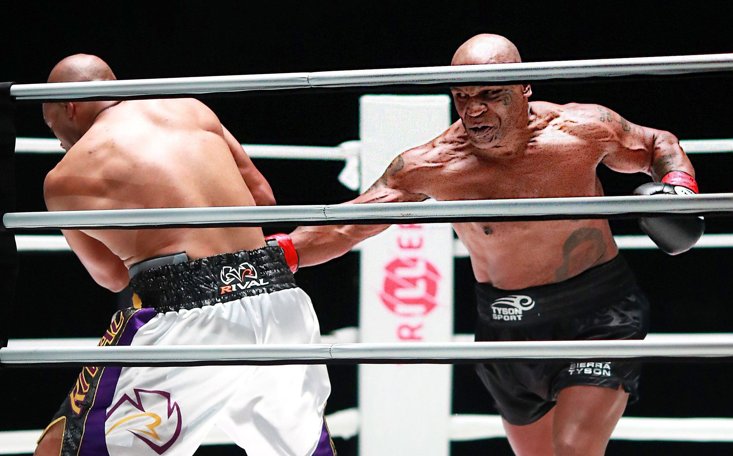 Sunny Edwards will defend his IBF flyweight world title against Muhammad Waseem on March 19th in Dubai on a solid Probellum card that also includes ​​Regis Prograis vs Tyrone McKenna in a super-lightweight clash.

“We are absolutely delighted to be returning to Dubai for our first event of 2022,” said Richard Schaefer, President of Probellum.

“Probellum has made a huge impact in the boxing world in a short period and we have some major plans for this year, starting with these two history-making shows in Dubai.

“There was a fantastic response to our first-ever event, which took place in Dubai at the end of last year, and we know there is a big appetite for boxing in the city.

“These two shows will feature many top-quality fighters from around the world, including Sunny Edwards, Muhammad Waseem, Tyrone McKenna, and Regis Prograis. We would encourage fans to secure tickets early in order to ensure they don’t miss out on what will undoubtedly be another fantastic event.”

Natasha Jonas will jump up three weight classes and face Ewa Piatkowska for the vacant WBO super-welterweight world title on the Amir Khan vs Kell Brook card on February 19th.

"Before I signed with BOXXER, my management and I had a meeting with Ben Shalom and told him what my goals and ambitions were and what I wanted to achieve before leaving the sport,” Jonas told Sky Sports.

"I knew it wouldn't be easy with so many champions tied up but Ben assured me he would make it happen and he hasn't let me down.

"I know it's a big risk but those risky fights have brought out the best in me and I'm ready. I'm looking forward to it, it couldn't be on a bigger show for north-west boxing and after I've boxed I'll be in the crowd myself to enjoy the main event. I am over the moon and I want to step up and get that world championship." 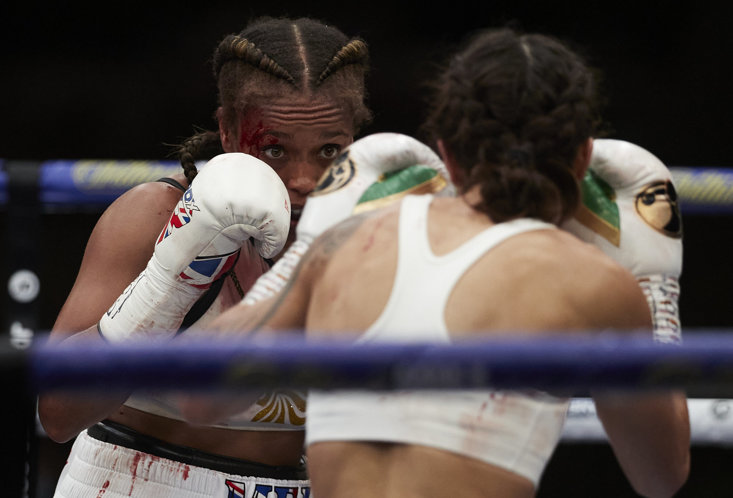 Several Options On The Table For Canelo’s Next Fight

Just who Saul ‘Canelo’ Alvarez will face in the ring next is anyone’s guess, but one thing that’s for sure is the pound-for-pound superstar has a seemingly endless list of options in front of him.

PBC have reportedly extended a one-fight offer Canelo’s way for a May defence of his undisputed super middleweight championship against middleweight title holder Jermall Charlo. Meanwhile, Eddie Hearn and Matchroom have mooted a two-fight deal that would see Canelo take on light heavyweight titleholder Dmitry Bivol with a long-awaited trilogy battle with Gennady Golovkin coming in September.

x
Suggested Searches:
The Sportsman
Manchester United
Liverpool
Manchester City
Premier League
More
boxing
Shields vs Marshall And Baumgardner Vs Mayer Make Up Stunning...
Boxing is having a remarkably good year for title unifications. While boxing’s four-belt era is [ ... ]
boxing
Everything You Need To Know Ahead Of Derek Chisora vs Kubrat...
Heavyweights Derek Chisora and Kubrat Pulev go to war once again this weekend, this time at the O2 Arena [ ... ]
boxing
Thunder From Down Under: Jai Opetaia And Australia's Golden...
Jai Opetaia upset Mairis Briedis to capture the IBF and The Ring cruiserweight titles on Saturday. The [ ... ]
boxing
Tyson-Douglas II Anyone? The Boxing Rematches That Never Happened
Boxing loves a rematch. The fight game puts on more sequels than the Marvel Cinematic Universe. Whether [ ... ]
boxing
The Sportsman Boxing Power Rankings: July 2022
The Sportsman Boxing Power Rankings is a monthly series ranking boxers on a number of factors to determine [ ... ]
boxing
Josh Taylor Vacates WBC Title With Jack Catterall Rematch On...
Josh Taylor has vacated the WBC super lightweight championship in order to work towards a rematch with [ ... ]
boxing
The Rally Warrior: How Boxing Helped Chris Ingram Become More...
World rally champion Chris Ingram has been punching above his weight for years in a sport awash with [ ... ]
boxing
Let It Go: Why There Is More To Life Than Joseph Parker For...
Joe Joyce faces Christian Hammer on Saturday night at Wembley Arena. While the veteran German has long [ ... ]
boxing
Liam 'Beefy' Smith Signs Multi-Fight Promotional Deal With Boxxer
Former WBO super welterweight world champion Liam Smith has signed a new deal with promoter Boxxer, [ ... ]
boxing
Wilder vs Parker On The Table For September? Five Boxing Stories...
From heavyweight returns to retiring legends, and whatever’s going on between Tommy Fury and Jake [ ... ]
boxing
Carl Froch Says Anthony Joshua “Needs A Brain Transplant” To...
Former super-middleweight champion Carl Froch has said Anthony Joshua “needs a brain transplant” [ ... ]
boxing
Primo Carnera: The Tragedy Of ‘The Ambling Alp’, Boxing’s Gentle...
"They had me by the throat. They would not let me quit. Every fight was to be my last one, but [ ... ]
boxing
How George Foreman's Lineal Championship Journey Paved The Way...
On this day in 1995, George Foreman was stripped of the heavyweight championship of the world. You might [ ... ]
boxing
Sorry Eddie, Errol Spence Jr Vs Terence Crawford Is Bigger Than...
Matchroom Boxing supremo Eddie Hearn has labelled Saul ‘Canelo’ Alvarez’s September [ ... ]
boxing
Tommy Fury Denied Entry Into The United States, Putting Jake...
Tommy Fury has revealed that he has been denied entry into the United States for this week’s press [ ... ]
boxing
Tyson Fury Calls Out Francis Ngannou: ''Bring It On Big Boy''
WBC, The Ring and lineal heavyweight champion Tyson Fury has called out UFC counterpart Francis Ngannou [ ... ]
boxing
25 Years Of The Bite Fight: The End Of Mike Tyson's Career As...
28th June 1997. The MGM Grand Garden Arena. A piece of Evander Holyfield is on the ring canvas. The [ ... ]
boxing
Everything You Need To Know Ahead Of A Bumper Night Of Boxing...
Joe Joyce will look to get his heavyweight title ambitions back on track this weekend when he makes [ ... ]
boxing
Weekend Boxing Wrap: A Star Is Born As ‘Bam’ Rodriguez Dominates...
It’s been a belting weekend of boxing. Over in San Antonio we were treated to a triple-header [ ... ]
boxing
Tyson Fury Claims He’s Tried To Make A Fight With “Diva” Anthony...
Despite being one of the biggest fights to be made in the world right now and the most monumental in [ ... ]
boxing
Conor McGregor And Floyd Mayweather 'In Talks' Over Boxing Rematch...
Conor McGregor and Floyd Mayweather are reportedly in talks over a boxing rematch, five years after [ ... ]
boxing
Shields Vs Marshall Unification Inbound, Five Boxing Stories...
One of the biggest fights in women’s boxing is looking set for September, Josh Taylor has vowed [ ... ]
boxing
“It Was You Or Me,” Anthony Crolla And Andy Morris Look Back...
Anthony Crolla has revealed that had it not been for an impeccable poker face in his 2010 English super-featherweight [ ... ]
boxing
Move Over Usyk-AJ, Andy Ruiz vs Luis Ortiz Is The Heavyweight...
If you think Anthony Joshua’s rematch with Oleksandr Usyk is the most exciting heavyweight fight [ ... ]
boxing
Jake Paul vs Tommy Fury Is On! Contracts Signed Ahead Of August...
Jake Paul and Tommy Fury’s long-awaited fight will take place on August 6th as the British boxer [ ... ]
boxing
Everything You Need To Know About Sam Eggington Vs Przemyslaw...
Former British, Commonwealth and European welterweight champion Sam Eggington returns to the ring this [ ... ]
boxing
Anthony Joshua Says He's ''The Comeback King'' But Tyson Fury...
Former two-time heavyweight champion Anthony Joshua has dubbed himself “the comeback king” [ ... ]
boxing
Josh Taylor Hints At Jack Catterall Rematch: ''He Couldn't Beat...
Unified super lightweight champion Josh Taylor has had enough of the “personal attacks” [ ... ]
boxing
Joe Louis And The Longest Heavyweight World Title Reigns In...
On this day in 1937, a new era for the heavyweight division was ushered in when Joe Louis shattered [ ... ]
boxing
With Respect To Anthony Yarde, Boxing Needs Artur Beterbiev...
Artur Beterbiev’s two-round destruction of Joe Smith Jr to unify three-quarters of the light heavyweight [ ... ]