Boxing
News
Fury, brother of Tyson, this week became embroiled in a war of words with the YouTuber
Kieran Spratt
12:00, 04 Mar 2021

With good looks, bundles of boxing ability and crossover appeal thanks to his stint on Love Island, Tommy Fury has all the potential to one day follow his big brother Tyson into boxing superstardom. That is, if he keeps his eyes on the prize.

This week the 21-year-old became embroiled in a war of words with YouTuber Jake Paul after Tyson mentioned Paul whilst praising his younger brother on social media, which quickly prompted Paul to fire back.

"He [Tyson] calls me out to fight someone - his brother! I didn't even know he had a brother,” Paul said on Instagram.

"You are Fury's little brother? If you want to do something don't let your brother do it for you."

Tommy Fury, who went 5-0 as a professional at the weekend, then hit back, "Mr Jake Paul, I don't need anybody to do my dirty work. I'll call you out right now myself.

"You can fight me any time, any place, anywhere. All you've got to do is get in touch." 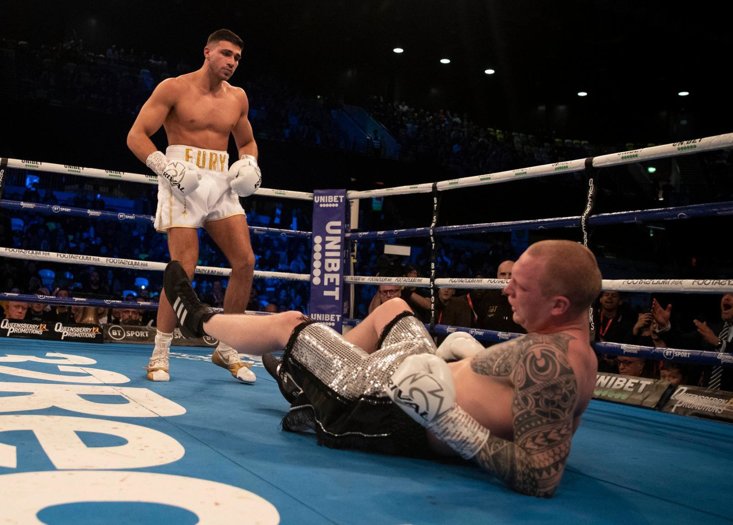 It’s entertaining and an undoubtedly lucrative proposition for both men that is bound to gain interest, much like any of Jake or his brother Logan’s previous fights against fellow YouTubers or NBA journeymen, but, apart from the financial gain, it doesn’t seem like a smart move for Fury in the grand scheme of things - not yet, anyway.

Fury has remained unbeaten in the ring since turning pro at the tailend of 2018 but has drawn some criticism for his quality of opponent despite his relatively short time in the sport. The five men he has so far faced have lost 174 times and won just twelve, and while that’s not a shocker for a fighter at the beginning of their career, it does signify that Fury needs to focus on steadily improving his choice of opponents, rather than on a fight that will do little to improve his reputation. He needs to ask himself if he wants to be a world champion or a celebrity because at this point in his career, it’ll be hard to do both. 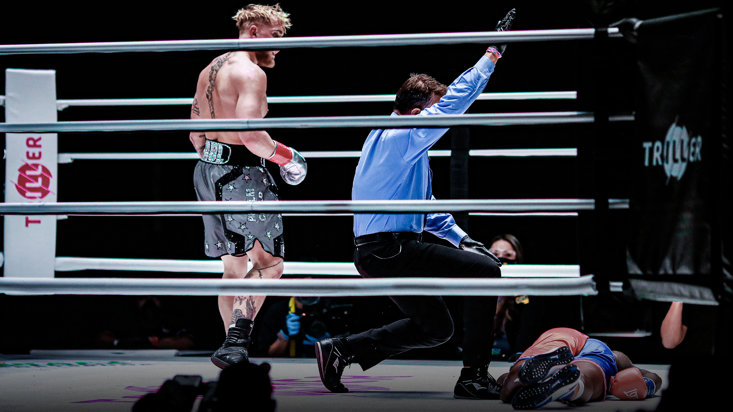 There’s also a question of whether the fight would be safe. Paul, who is currently training to fight MMA star Ben Askren, has fought twice as a professional, winning both, but those were fights against people who had no business stepping foot into a ring. Fury, an actual professional and the member of a bonafide fighting family, could pose some serious health problems for someone who’s full-time job is on YouTube.

2021 will be full of fights like this and expect the Paul brothers to be involved in ‘spats’ with everyone from Conor McGregor to Joe Exotic over the next 12 months. But, for now, Fury should focus on a potentially blockbuster future.

x
Suggested Searches:
Tyson Fury
Manchester United
Marcus Rashford
Lewis Hamilton
F1
Air Jordan
More
boxing
De La Hoya In ''Talks'' With Eddie Alvarez, Five Boxing Stories...
Oscar De La Hoya has found his “big name” UFC opponent, Anthony Joshua and Tyson Fury’s [ ... ]
boxing
Claressa Shields Finds Opponent And Venue For MMA Debut In June
Two-time Olympic gold medallist Claressa Shields has found an opponent and venue as she makes the swap [ ... ]
boxing
Chris Eubank Jr Wants ''End Game'' Gennady Golovkin And Targets...
Chris Eubank Jr may have been out of the ring for the entirety of 2020 but he returns on May 1 in Manchester [ ... ]
boxing
Paintball, Pogba and Me: Marcus Morrison Talks Football And...
Marcus Morrison will soon take aim at Chris Eubank Jr, but it won’t be the first time he has had [ ... ]
boxing
Evander Holyfield, 58, Set To Take On Former Mike Tyson Foe...
Heavyweight legend Evander Holyfield looks to have found an opponent for his long speculated return [ ... ]
boxing
Conor Benn Destroys Samuel Vargas In Just 80 Seconds And Calls...
Conor Benn was in explosive form on Saturday night, blitzing Samuel Vargas with a swathe of shots which [ ... ]
boxing
“Mature” Conor Benn Confident He’ll Rise To The Challenge Against...
Conor Benn takes another step up in his promising career on Saturday night when he takes on grizzled [ ... ]
boxing
Whyte Willing To Go To Alabama For Wilder Fight, Five Boxing...
Dillian Whyte is willing to go to Alabama to set up a clash with Deontay Wilder, Claressa Shields is [ ... ]
boxing
Eddie Hearn Would Love To See A Two-Fight Series Between Ngannou...
Last week, newly-crowned UFC heavyweight champion Francis Ngannou announced his long held desire to [ ... ]
boxing
Amir Khan Warns Conor Benn Of 'Dangerous' Samuel Vargas Threat
Amir Khan has warned Conor Benn to be wary of Samuel Vargas’ "dangerous" power [ ... ]
boxing
Carl Frampton Calls Time On Stunning Career After Losing Record...
Carl Frampton has called time on his brilliant boxing career after his bid to become a three-weight [ ... ]
boxing
Conor Benn Targets Khan Or Brook, Five Boxing Stories You Might...
Conor Benn is targeting a big domestic bust-up, Devin Haney has found a test at lightweight and one [ ... ]
boxing
Everything You Need To Know About The Most Advanced Boxing Game...
Fight fans, rejoice. There’s finally a new boxing video game en route and boy, does it look [ ... ]
boxing
Dillian Whyte Ready To Fight Deontay Wilder Or Andy Ruiz Jr,...
Dillian Whyte is ready to take on Deontay Wilder or Andy Ruiz Jr after defeating Alexander Povetkin, [ ... ]
boxing
Forget The Year Of The Ox, Frampton’s Ready To Make It The Year...
It’s been one hell of a ride for Carl Frampton. He was already a two-weight world champion, the [ ... ]
boxing
Josh Warrington Seeking To Put Things Right Against Lara, Insists...
Josh Warrington will get back in the ring with Mauricio Lara to "put right" the shock [ ... ]
boxing
Dillian Whyte Blitzes Alexander Povetkin In Four Rounds To Gain...
Dillian Whyte gained revenge over Alexander Povetkin in Gibraltar on Saturday night, stopping the Russian [ ... ]
boxing
Campbell Hatton Makes Dad Ricky Proud With Professional Debut...
Campbell Hatton kicked off his professional career with a win by beating Jesus Ruiz (0-11) via [ ... ]
boxing
De La Hoya, 48, Signs Multi-Fight Comeback Deal, Targets ‘Big...
Eleven-time world titlist and six-weight world champion Oscar De La Hoya has confirmed that on July [ ... ]
boxing
Repeat Or Revenge? Heavyweight Rematches Dillian Whyte Can Take...
On Saturday night, Dillian Whyte heads to Gibraltar in search of revenge against Alexander Povetkin [ ... ]
boxing
Dillian Whyte In Great Shape And Blocking Out Background Noise...
Dillian Whyte insists he “doesn’t care” about outside opinions on his rematch with [ ... ]
boxing
AJ Vs Fury Could Happen At Wembley - Five Boxing Stories You...
The son of British boxing royalty makes his professional debut this weekend, Vasyl Lomachenko has finally [ ... ]
boxing
Whyte Out To Bounce Back And Prove The Doubters Wrong Against...
Dillian Whyte has vowed to prove wrong anybody who has written him off in the past and insisted he will [ ... ]
boxing
''I Want It All'' - Okolie Targets Mairis Briedis And Cruiserweight...
Lawrence Okolie looked sensational when he stopped Krzysztof Glowacki inside six rounds at the SSE Arena [ ... ]
boxing
Povetkin Dismisses Dillian Whyte's Coronavirus ''Excuse'' Claims...
Alexander Povetkin has insisted that he had a positive Covid-19 test which forced the rescheduling of [ ... ]
boxing
How Muhammad Ali Vs Chuck Wepner Helped Inspire Stallone To...
The story of Rocky Balboa has drawn influences from a number of real-life boxers but until recently the [ ... ]
boxing
From Gibraltar To The Playboy Mansion: Boxing's Most Unusual...
This weekend Dillian Whyte goes to Gibraltar in search of revenge over Alexander Povetkin after suffering [ ... ]
boxing
Lawrence Okolie Stops Glowacki In Six To Capture WBO Cruiserweight...
A British, European, Commonwealth and now world champion - it’s fair to say that Lawrence Okolie [ ... ]
boxing
Mike Tyson Targets Return In May - Five Boxing Stories You Might...
The Baddest Man on the Planet is set to return to the ring once again, Floyd Mayweather is eyeing up [ ... ]
boxing
Okolie Expects To Be Spoken To With ''Respect'' If He Wins World...
Lawrence Okolie expects to be spoken to with “an element of respect” if he beats Krzysztof [ ... ]