Jake Paul season gets into full swing with yet more social media beef. Meanwhile, Floyd Mayweather is being nice to people. It’s all going on in this week’s Five Boxing Stories You Might Have Missed.

Just a day after word filtered out that zoomer impresario Jake Paul was going to fight Hasim Rahman Jr, the YouTuber offered out Tommy Fury once again. Taking to Twitter to target his nemesis, Paul said, “I’m confident you are a scared little boy who doesn’t want to fight or understand business. I will pay you $500K to fight me in the UK. I will do it shortly after August 6. You accept?”.

Fury responded, “I wouldn’t get out of bed to fight you for $500k. Let me know when you’re ready to have a serious conversation.” For what it’s worth, the half a million dollars in question would be over ten times what Fury can make on undercards against professional fighters of his level. His decision to sidestep the bout publicly could be one he comes to regret, particularly if Rahman Jr or another pro boxer finally derails the Jake Paul hype train.

Since handing the Mexican his first defeat in 2013, Mayweather has been a vocal critic of Saul Alvarez. Surprisingly, ‘Money’ has now come out in defence of his former rival. Floyd spoke in the wake of Alvarez’s protege-turned-detractor Ryan Garcia aiming some barbs at his former friend.

"Accomplish what Canelo has accomplished, then speak bad about him. You know what I mean?” Mayweather warned. He was also complimentary about ‘Canelo’ as a fighter, something he has rarely been in the past. “One thing about Canelo, he's gonna step up to the plate and do what he gotta do. He's gonna fight. I may shoot s**t at him but he gonna fight. I can't knock the motherf**ker because he's going down in the Hall of Fame."

London will play host to Claressa Shields and Savannah Marshall’s long-awaited grudge match on 10th September. The undisputed middleweight championship clash has been bubbling for a long time, with the pair sharing an intense rivalry that goes back to the amateurs. Marshall defeated ‘The GWOAT’ in the unpaid ranks, and remains the only fighter to beat Shields as an amateur or professional.

This sensational main event will be supported by Mikaela Mayer’s super featherweight unification showdown with Alycia Baumgardner. The card is being advertised as an all-female event. The Sportsman caught up with both Shields and Mayer this week to discuss what is set to be one of the shows of the year. 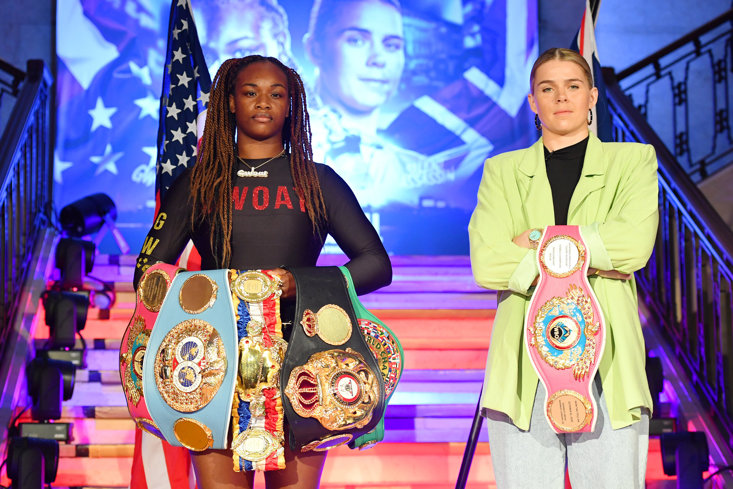 WBA ‘regular’ champion Daniel Dubois has multiple options for his maiden title defence according to trainer Shane McGuigan. Speaking to Sky Sports, the 34-year old said, “"There are some great fights out there for him. You've got [Dereck] Chisora vs [Kubrat] Pulev.”

A recent heavyweight title challenger was also mentioned, with the coach saying, "Dillian Whyte's a great fight for Daniel. I'm not sure Dillian will want it because of where he is in his career. There's easier fights for him that will make more money and draw more attention, so that one might be a hard one to make.” Meanwhile a rematch with the one man to defeat Dubois was also touted, with McGuigan describing Joe Joyce as, “a very hard night's work for anyone.”

Eddie Hearn says he has tried to make a fight between ‘Canelo’ conqueror Dmitry Bivol and British contender Joshua Buatsi. Speaking to Pro Boxing Fans, the Matchroom kingpin said, “We want Buatsi to fight Bivol. We’ve made an offer now to Buatsi to fight Bivol, which we want to make sure he’s happy with, and hopefully, we can make that fight.”

Buatsi is the number two-ranked light heavyweight in the world with the WBA, whose world championship Bivol currently holds. This bout could be a sensible way of keeping the sanctioning body happy and marking time while Bivol waits for a lucrative rematch with Alvarez, who he decisioned back in May.