In the Smithsonian, a baby blue Bahne skateboard sits proudly on display as part of the National Museum of American History collection.

The griptape is hanging on for dear life and the wheels now have a rusty hue, but this unassuming plank of wood is probably the most prized artefact in extreme sports. Handed down by his elder brother Steve, this board would become the first of many for a certain Tony Hawk, born on this day in 1968.

Described as a “hyperactive” child by himself and those who knew him, Hawk’s tentative first steps on this hand-me-down would provide a watershed moment for the future X-Games winner and the sport of skateboarding as a whole. In a world of ball bearings and concrete waves, Hawk found a new focus and like the flip of a switch, the youngster’s wildchild persona shifted almost instantaneously.

Hawk, like his name, was built like a bird - scrawny, gangly and weaker than many of his peers at the Oasis Skatepark in San Diego. But what he lacked in raw physical talent, he made up for with an unwavering motivation. Soon enough, Hawk’s talents were discovered by Stacey Peralta, a skateboarding pioneer of Z-Boys fame, and added to the legendary Bones Brigade roster. 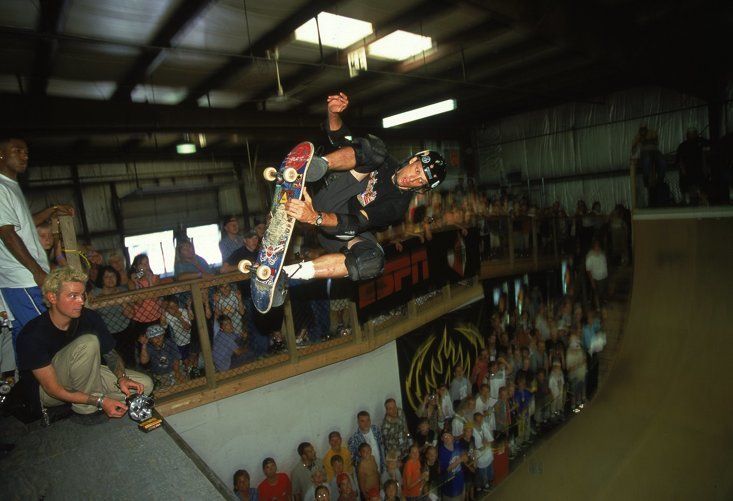 However, while Hawk was making a name for himself, his skills were considered too cute for the sport’s grizzled veterans. The pros were like punk rockers, preferring to master the fundamentals rather than break new ground. Skaters like Duane Peters, whom Hawk idolised, pushed the youngster away, while spectators, even in Del Mar, Hawk’s home patch, would boo and throw beer cans at him, creating a cacophony of joy any time he fell off his board.

His ostracism wasn’t helped by the fact that his dad Frank helped set up the NSA, a governing body for the sport. Though the elder Hawk’s presence had absolutely no bearing on his son’s blossoming career, it became a bugbear for others who disliked Frank’s militant way of doing things and regarded him as something of a bull in a china shop.

But, as the Birdman got older and began to add a few slabs of muscle to his slender frame, he started to garner more attention. Bigger, stronger and with a seemingly bottomless bag of tricks, from varials to finger flips, Hawk became a phenomenon, winning nearly all that was put in front of him. He was beating the older members of the Bones Brigade, his heroes, regularly.

Success came at cost. Having reached the top of the mountain, Hawk had nowhere else to go and lethargy began to settle in. He had spent years on the competition circus, winning and then going straight onto the next one. Sick of the routine, Hawk quit.

The end of competition liberated Hawk and gave him the freedom to enjoy the sport again. It wasn’t about scoring points anymore and it gave him a different approach to skateboarding, allowing him more creativity. The lack of competition did little to dull Hawk’s star power either - he went on tour with the Bones Brigade across the US, Europe and Australia, where thousands would line-up to watch him in action. By 17, he was making six figures through skateboarding and bought his first house with a swimming pool and miniature skate park when he was still in high school. 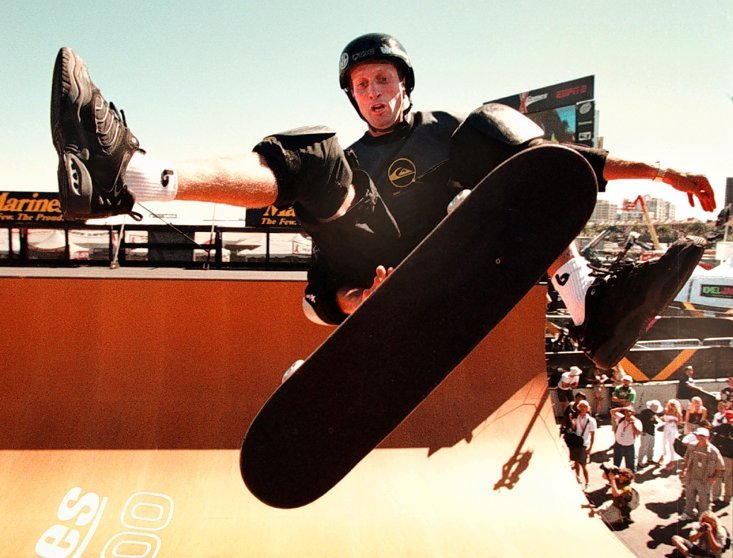 This was the pre-Tony Hawk’s Pro Skater days however, and skateboarding's future as a sport was far from certain. The magazines and brands started to go away, the parks started to close down and vert skateboarding was circling the drain. The money wouldn’t last, and with a wife and child, Hawk began scraping by editing surf videos.

The sport achieved a new level of visibility in 1995 with the arrival of the X-Games though. Two years later, the extreme sports showpiece was being watched in 198 countries across the world and Hawk, now a familiar face thanks to a gig as a ‘Got Milk?’ spokesman, was thrust into the spotlight again to a wider audience.

Hawk wrote himself into the history books in the 1999 instalment. Since its inception, the X-Games have found a home for some of the most mind-boggling, gravity-defying and physics-flouting tricks to ever be performed in the world of extreme sports. The first-ever snowmobile front-flip? Check. The first ever freestyle motocross double backflip? Check. The first landed triple cork in a snowboard competition? Check. But it’s the 900, of all the outlandish tricks to ever be successfully completed, that’s still the most revered.

The 900 had been at the top of Hawk’s trick wish list for over a decade, the final entry on a list of tricks the Birdman wished to complete before he hung up his helmet and shin pads for good - last on the list because it would, of course, be the trickiest. By the time 1999 had rolled around, the ollie 540, kickflip 540, and varial 720 had all been scratched off, leaving just the small matter of completing two and a half revolutions in the air - a feat that many believed just wasn’t possible.

As Hawk stepped up for his tenth attempt at the 900 on that cloudy San Francisco evening in the Best Trick event, perhaps he even doubted the probability he’d ever land it. He’d gone well past the allotted time given to each rider to perform their tricks, but despite the protest of some skaters the announcer boldly announced, "We make up the rules as we go along. Let's give him another try."

Then he landed it. Two and a half full rotations of the board as he reached the lip of the half-pipe, his hand barely grazing the ground as he landed. The crowd went wild and Hawk was left in utter disbelief, taking a while longer than anyone else in the arena to realise what he’d just accomplished. When it finally hit him, he stood triumphantly at the centre of the half-pipe, his skateboard held aloft in the air - Holy Grail achieved. 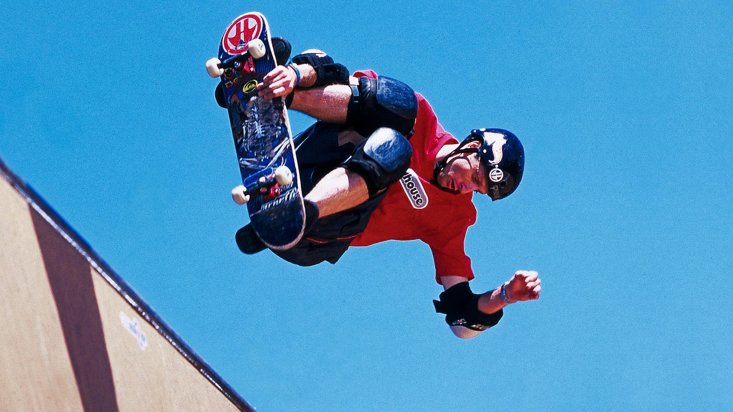 The landing of the 900 coincided perfectly with another key chapter in the life and times of Hawk. A mere month later, the first game in the Tony Hawk Pro Skater series was released in North America. Bolstered by Hawk’s entry into the public consciousness, THPS1 would become one of the best-selling games of the decade. 20 games later, across pretty much every gaming platform going, the series has made roughly £1.4bn since 1999.

These days Hawk, who can still blow minds on a skateboard at the age of 54, remains as popular as ever and his importance to the sport of skateboarding cannot be understated. Before him it was little more than street surfing - a menace within concrete jungles across the States. Under him it transformed into an art form. Now, with its arrival at the Tokyo Olympic Games last summer, it is recognised as a true sporting pursuit.

It’s hard to imagine we’d be at this point now without Tony Hawk and that ragged, worn-down baby blue Bahne.