Last season was a very near miss for Brentford Football Club, but it feels like they’ve had a few of them of late. As the underdog club, and by extension the neutrals’ favourites, there was a concern that their latest close shave with the Premier League might have been their last. But now they top the Championship and, dare we say it, look better placed than ever to return to the top flight for the first time in 74 years.

Following a blown opportunity to gain automatic promotion and then the heartbreak of a play-off final loss to Fulham, Thomas Frank’s side have simply done what it is Brentford do. They took the body blow of those late-season results and a couple of big-name exits, added some smart signings and simply backed what they’d been doing all along. The result? They have come back every bit as competitive as last term.

Their structure and way of operating is well known by now. They took on the Moneyball approach to football, deciding to look beyond the league table, forgetting the chaotic nature of some games and results, trusted in the principles of backing innate talent and came up with a model that both backs their ability to identify good players but also doesn’t depend on those exact individuals.

Last summer they lost Said Benrahma to West Ham and Ollie Watkins to Aston Villa after a couple of years in which they had both been key to Brentford’s progress. But they also brought in Ivan Toney from Peterborough United and put their faith in existing talents to make the kind of natural progression which would give them another shot at promotion. The £46.3m profit made from those transactions was a handy bonus too.

On Wednesday night Toney bagged his league-leading 23rd goal of the season and former Arsenal youngster Josh Dasilva netted twice in a 3-1 win at Reading which puts the Bees top of the league with 18 games to play. It is no accident that, even after a slow start to the season, Brentford are 21 games unbeaten and absolutely flying. It is form which has seen them installed as 4/6 favourites to win the league by Betfred. 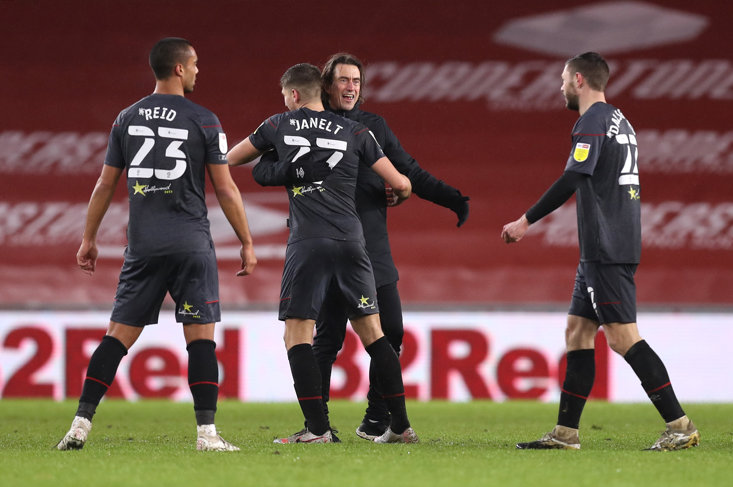 Frank himself is the result of a similar approach to managers as the one Brentford employ on the pitch. The Dane was promoted to head coach having been Dean Smith’s assistant before the main man’s departure for Aston Villa in 2018, showing that following a good plan is generally more important than identifying a certain individual when it comes to managers.

Benrahma and Watkins are just two names that Brentford have shipped out and found replacements for in recent years. The likes of Scott Hogan, Andre Gray, Stuart Dallas, Jota, Jack O’Connell, Lasse Vibe, John Egan and Chris Mepham have all been moved on to no significant detriment. While like-for-like replacements haven’t always been available, Brentford have generally found a formula which plugged the gaps more than capably.

After six consecutive top-half finishes since their 2014 promotion from League One and two failed play-off bids, the Bees now look the business. Far from hitting a dead end after their countless close calls, they look as imperious as at any time in recent seasons, and Frank knows the importance of not letting their incredible run of form go to their heads.

“Of course we’re pleased to be top, but it doesn’t matter,” he said after the win over Reading. “It’s the next game that matters the most and we know when we keep being unbeaten it’s going to be harder to win the next one.”

Calm, measured, and planning ahead is the Brentford way. They are the example for others to follow, and they might yet get that dream promotion to the Premier League. The Bees look as ready as they ever have to finally make the step up to the top flight.