The best attacking team in the Premier League this year? That’s not Manchester City or Liverpool, but Antonio Conte’s Tottenham Hotspur. Five more against Newcastle at home secured an impressive home win that took them into the top four and also showed just how potent this attack can be as they bagged their 30th goal since the turn of the year.

Harry Kane didn’t get his name on the scoresheet, but he did everything else. It was no surprise that when he began to get on the ball and ping passes about, Spurs took the game away from the Magpies, who went 1-0 in front in the first half through Fabian Schar. In Kane, Spurs have the best goalscorer in the Premier League, and arguably the second best passer of a ball, behind Kevin De Bruyne.

His future this summer will be a huge talking point once again but under Conte, he is playing some scintillating football, and along with Heung-min Son and Dejan Kulusevski, has the ability to take apart any defence in the league. This result puts Spurs above Arsenal for the time being, as the Gunners play tomorrow night against Crystal Palace, but the fact Tottenham are even in the conversation is testament to the work the Italian has done.

It was not a memorable opening half an hour with chances few and far between, but Newcastle got themselves in front before the break. Son clipped Willock for a free-kick on the edge of the area and Fabian Schar stepped up to beat Hugo Lloris on his side. The Frenchman’s view was blocked by two Newcastle players, but he still should have done better with the low effort that squirmed past him.

If Tottenham had lacked incision before the goal, it seemed to spark them into life. They went on the front foot and got their equaliser almost immediately. Eric Dier won the ball in the box and fed it back out to Son, who put in a deadly delivery that Ben Davies was able to head home. Spurs hadn’t shown much in the first 45, but when it came down to it, one of their star man showed a real moment of quality to drag them level.

At the break, It seemed as if Kane simply decided to run the show. Less than three minutes after the break Spurs were in front as Kane picked up the ball on the right and whipped a ball across goal, where Matt Doherty was there to head home from his unnatural left wing-back position, after Son miscued his effort. 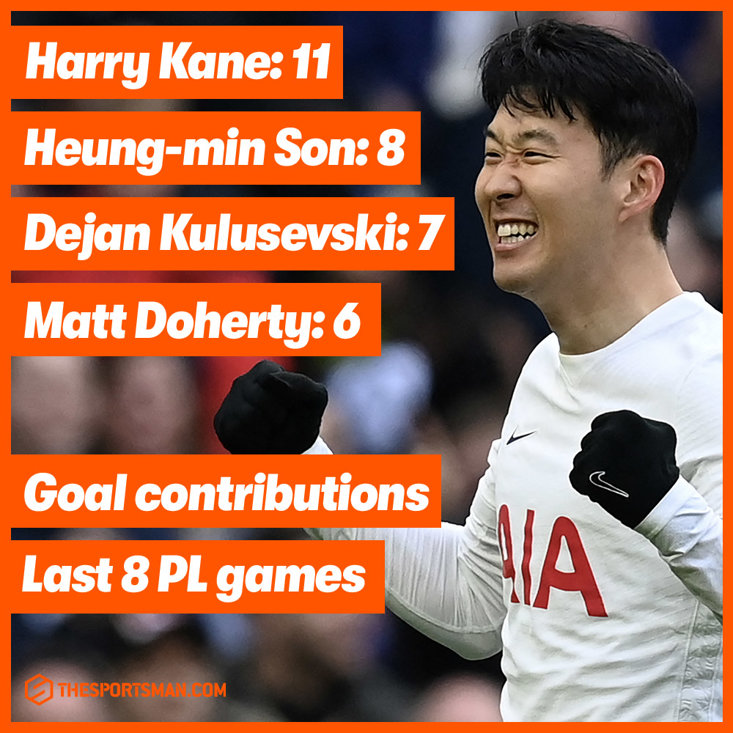 Kulusevski hadn’t been able to get into the game in the first period but a few quick passes sent him away on the right wing, and he played a ball into Son in the centre of the goal, who then finished into the roof of the net to give the hosts a two-goal cushion.

Newcastle were left stunned by Tottenham’s start to the second period and as Kane began to get himself more involved in proceedings, the home fans began to enjoy themselves. Eddie Howe made changes to try and get his side back into the game, but Spurs soon had their fourth.

Doherty, who is in a fine purple patch, played a quick one-two on the left before crossing for Emerson Royal to bundle home from inside the six-yard box. Antonio Conte’s wing-backs are just so important and when they are on top form, the side plays well.

It should have been more, as the England captain pinged passes all across the pitch. He superbly played in son Son who dragged his shot wide as Newcastle were at sixes and sevens, and could have conceded that number in North London.

Steven Bergwijn came off the bench to fire home a fifth on what was a superb second half for Spurs, but this was a performance to savour from Harry Kane. He didn’t get his name on the scoresheet, but this was a game that showed just how much he has to his game. That price tag might be even higher this summer.