Yesterday’s Recap: There was another late crash and a very ballsy game of cat and mouse between the peloton although we had a bunch sprint and it was a second win for Fernando Gaviria who has already made a big imprint in the Tour de France. It’s his second win from two contested and once again he beat Peter Sagan, suggesting the battle for Green will be red hot given that Gaviria also won the Intermediate sprint. Andre Griepel was back to form with an excellent third although it had looked as if he’d win for much of his sprint.

The general classification for the Top 10 stayed the same but Ilnur Zakarin lost 59 seconds and 27 places on a bad day for Katusha given that Marcel Kittel was too far back to contend despite a strong sprint whilst Tiesj Benoot was taken to hospital at the end of the stage and lost 10 minutes.

A lot of fun is on the cards. The first 50 kilometres from Lorient are gentle enough before the territory gets progressively harder and then we have the day’s intermediate sprint at

That ought to be lively but the finish is wonderfully tricky too. With 12.7 kilometres to there’s an unclassified stretch of climbing that averages 6.5% for 800 metres stretch before easing off whilst still heading uphill for another kilometre. Another three kilometres on, and there’s a 5% stretch for 1.3 kilometres which is a rolling section that ends with a two-kilometre descent. Coming into the last 1500 meters, there’s a slight rise at 3% that ends with 1.4 kilometres to go before a short drop and a sharp uphill finish - The final kilometre run-in to the line climbs at 4.8%. 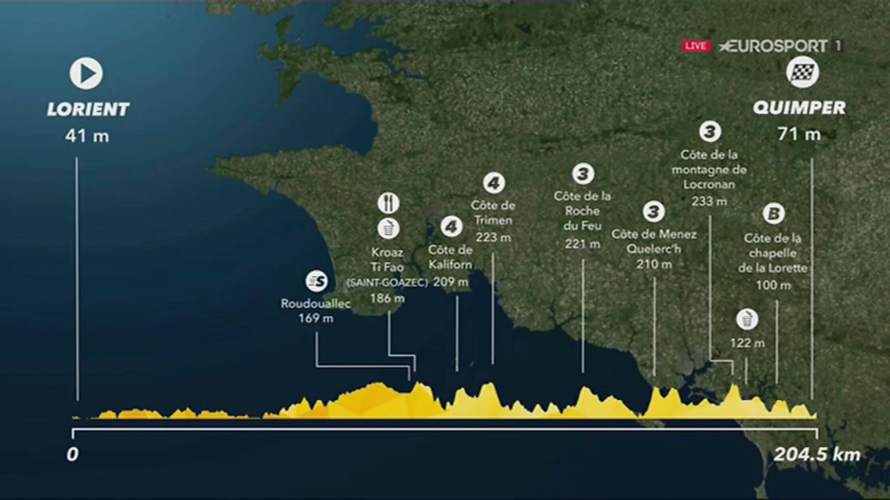 It’s puncheur time. Peter Sagan already has a win to his name and will have been licking his lips at this week, with three stages he can win and today is one of his best chances. His Bora-Hansgrohe team is filled with heavy hitters to put on the pressure in the shape of Maciej Bodnar, Marcus Burghardt, and Lukas Pöstlberger before Daniel Oss takes him home and he’s the one to beat.

Greg Van Avermaet has already had success this Tour by being in yellow, but the BMC man should enjoy this finish and is good enough to look after himself or Richie Porte through the finale. The closing five kilometres are rather reminiscent of 2015’s 13th stage to Rodez, where he got the better of Peter Sagan.

Who for Quick-Step? One would suggest there’ll be better chances for Fernando Gaviria, so Bob Jungels and Julian Alaphilippe are now big players and the nature of the last 80 means that Phillipe Gilbert begins to become the standout – he’s also just 5 seconds back at the time of writing on Van Avermaet although.

This shouldn’t be too hard (just about) for Sunweb’s Michael Matthews who would need a gap to take the yellow jersey but ought to be contesting the stage win.

The overall contenders will need to be on their mettle if they’re to survive intact and it’s entirely possible they clash before the Mur de Bretagne tomorrow. Alejandro Valverde has already been seen up at the head of affairs into La Roche-sur-Yon and this is just the chance for him to take precious seconds before the Mur tomorrow. Vincenzo Nibali is another rider who has started well whilst Romain Bardet has reconned the course and has a powerful AG2R team to help out.

Team Sky will be on their guard today but nearly all the team is explosive enough to contend here.

Another day unscathed, and amazingly for David Brailsford too given that he insulted the mayor of the finish town yesterday. Sometimes your luck is in!