Yesterday’s Stage - Another day, another crash as the peloton were split. Amongst the riders to come down were Tony Martin, Julian Alaphilippe, Toms Skujins and perhaps most crucially Dan Martin, who suffered badly with road rash and cuts.

Team UAE Emirates pulled back to help him (bar Alexander Kristoff), and they pulled the deficit back to 40 seconds with four kilometres to go, but the battle to get a position in the sprint meant the gap grew once again and he ended up losing 1 minute and 15 seconds.

The finish was won by Dylan Groenewegen, who produced an extraordinary turn of foot to win the sprint, passing Andre Greipel and Fernando Gaviria. He now has two stage wins, a huge boost for a Lotto-NJL Jumbo team that can call the tour a success even before the Alps.

Today’s Stage - Cobbled time. One of the most pivotal stages of the Tour as we travel from Arras to Roubaix, using many of the same roads as the legendary Paris-Roubaix. There are 15 cobbled sections to make up for a total of 21 kilometres of pave, a huge amount packed into just over 100 kilometres. The sections are below, with their distances.

The results of Paris-Roubaix this year were:

The Contenders - There are two races here, one for the stage win and the other between those battling for yellow. Both will combine to make a thrilling spectacle, with a mini Roubaix up for grabs and the Tour at stake.

Peter Sagan finally put his Roubaix demons to bed earlier this spring and he’s already stamped his imprint on this Tour here. Bora-Hansgrohe are also set up for him with Rafal Majka hoping to tag along for the ride and pick up some time on the day and he has to be called the major favourite.

Greg Van Avermaet has ridden extremely cannily through the first week and picked up another bonus second to make sure he’ll wear yellow. He’s not had a stage win in the jersey, but this is as good a chance as any for him – he’s a past winner of Roubaix – and BMC will need to have him close to the head of affairs for Richie Porte.

Quick-Step want to take the yellow jersey and after Alaphilippe’s crash, their best chance of taking the lead lies with Philippe Gilbert. Gilbert only rode Paris-Roubaix for the first time this year, amazing given that he is such an expert when it comes to the classics, and he went too early on the Arenberg and eventually was a well-beaten 15th; The dynamics of this stage will suit far more. Niki Terpstra had a great classics campaign and was third in Roubaix after having won the Tour of Flanders, and he looks their best form card although Yves Lampaert won wars door Vlaanderen. Bob Jungels will be around too, a winner of Junior Roubaix but just 22 seconds behind Van Avermaet in the standings.

Trek have two big chances of the stage win. John Degenkolb has been showing plenty of speed in the flat finishes and is a past winner of Roubaix in 2015. They might have a better alternative in Jasper Stuyven, who was seventh at the Tour of Flanders, fifth at Paris Roubaix and gives Trek a big shot of being involved here as he can attack and has a sprint to boot.

Arnaud Demare has had nothing go right so far this Tour but if it’s a bunch sprint then few would be faster than him and it’s a chance for him to atone for a poor tour so far, even if a slim one.

The Maillot Jaune - This is a huge day for Vincenzo Nibali. In 2014 he was strongest when taking yellow, but he won the tour on the cobbles when it poured down and he was one of the most active riders in 2015 too. Heinrich Haussler and Sonny Colbrelli will play vital roles but he can ride solo if needs be, see past evidence.

Rigoberto Uran is extremely well placed – he has Sep Vanmarcke and Taylor Phinney working for him today, along with a strong EF squad outside of them. This is a chance for him to improve his already strong GC placing and one the squad will want to take.

Movistar have Alejandro Valverde and Mikel Landa in decent positions in the general classifications with Quintana still back behind the others. Valverde can handle himself over the cobbles, he was 11th in Dwars door Vlaanderen, but Landa and Quintana are more vulnerable despite plenty of reconnaissance, Landa due to a lack of experience and Quintana due to his GC position.

Is Geraint Thomas on Froome duty? Sky are still going with him as Plan A but Thomas has a not insignificant advantage over some of his rivals, has gone well in past editions of Roubaix, and gives Sky a great second option. Either of Michał Kwiatkowski and Gianni Moscon could easily win this and their power and positioning will be crucial.

Richie Porte has a super domestique in theory with Greg Van Avermaet in yellow although we don’t know who will work for whom (likely GVA for Richie), but Stefan Kung’s power is hardly small and it’s a team of big engines all round.

Romain Bardet’s team has been built for all terrain but it is vital that Silvain Diller and Oliver Naesen are on form today, Diller was second in Roubaix this year from the break and Naesen rarely has a bad race, so Bardet has two of the best weapons in the race.

Primoz Roglic has managed to make it through the first eight stages in one piece, but today will be a severe test for the Slovenian, who has precious little cobbles experience.

Adam Yates is surrounded by big engines - so many of them Caleb Ewan had to stay at home - for moments such as this and he's reconned the stage three times (according to a quote he gave the BBC after yesterday's stage). He has raced on the cobbles before as a junior and at under-23 levels, so won’t be going in blind, so to speak, and the guidance of Matthew Hyman and Luke Durbridge will be vital as he sits in a strong position (on the same time as Chris Froome currently).

Tom Dumoulin will be frustrated that much of his early advantage has been lost thanks to a crash and time penalty, but the Giro second is a winner at the BinckBank Tour and has raced the Eneco Tour in the past. His big frame should be a help and whilst Michael Matthews is missing, a strong all round team was put to help his chances and this now means he can count upon Simon Geschke and Edward Theuns. 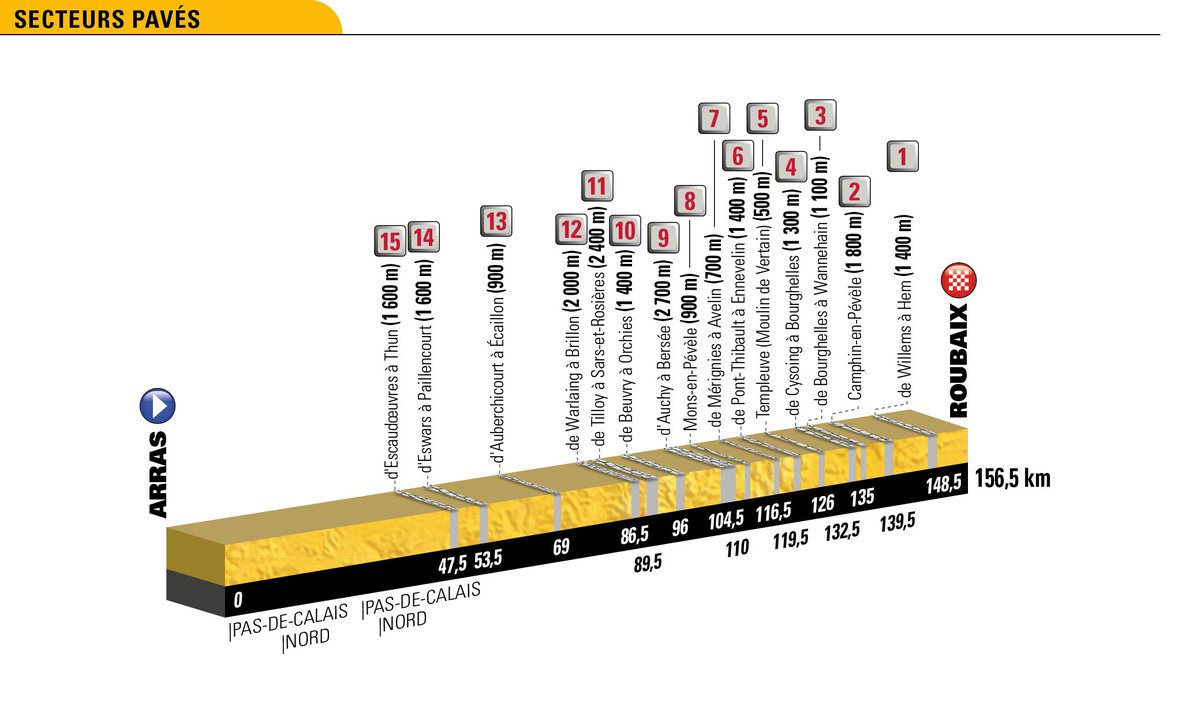