Matchroom Sport chairman Eddie Hearn has mapped out Anthony Joshua’s road to heavyweight redemption. With the former two-time unified heavyweight champion currently riding a two-fight losing streak, having been handed back-to-back losses by Oleksandr Usyk. AJ’s promoter has preached the importance of a measured rebuild for his man, as he looks to reposition the 33-year-old for a title shot.

Hearn’s three-point plan starts with a fight against a member of the world top 15. We don’t know which specific ranking will be used to select this opponent. Tyson Fury’s team recently stretched credibility to breaking point, using the BoxRec rankings to justify Derek Chisora as a heavyweight title challenger.

Whoever is first up for the Olympic gold medalist, they are likely to be a significant underdog. Joshua has lost three of his last five fights and cannot afford another defeat at this delicate stage. At the age of 33, a rebuild is there if he wants it. But take on too much too soon and a loss would be career-ending.

If and when Joshua comes through his ring return against a top 15 opponent, Dillian Whyte is currently pencilled in as his next opponent. The pair of old amateur rivals contested an exciting pro contest in 2015, with Whyte hurting AJ before being stopped in the seventh round. This fight would make a lot of sense for both men.

Touted as a stadium attraction, the proposed all-British affair would financially reward both men handsomely. Meanwhile, Whyte has precious few other avenues. Having lost his long-awaited title shot to Tyson Fury last April, and flattered to deceive in a controversial win over Jermaine Franklin, there isn’t a wealth of big fights available. A money-spinning sequel with Joshua suits all involved.

If AJ can go 2-0 from these comeback bouts, he will get a true test of his mettle. Hearn says he is targeting either Fury or Deontay Wilder for his man before the end of the year. Either of these fights would be magnificent. Whether it be the long-awaited battle of Britain with ‘The Gypsy King’ or a proper shootout with ‘The Bronze Bomber’; either bout would be worthy of the hype. 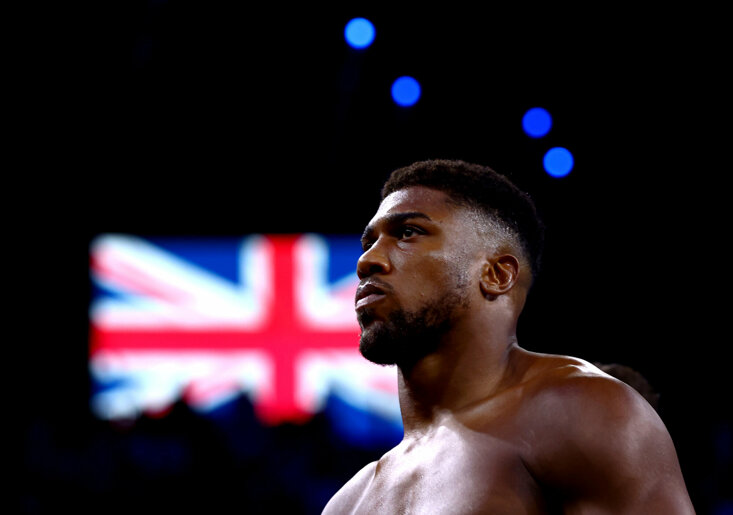 But would these fights be right for Joshua? They’d be difficult, sure. Nobody has ever defeated Fury while Wilder has only lost to the WBC champion. Wilder’s punch power is unlike anything AJ has faced in his career, but then the same could be said of Joshua’s own whack and Deontay’s ability to take it. AJ definitely hits harder than Fury after all. There is a robust argument to be made that Joshua would be the best fighter Wilder has faced outside of ‘The Gypsy King’.

Fury would be the trickier of the two, but would also carry the greatest reward. It remains to be seen whether the WBC champion puts his money where his mouth is in an undisputed title fight with Usyk. But, whatever happens, chances are the Mancunian would be taking at least one world title belt into any bout with AJ. If the Watford man can find a way to win, he would equal Muhammad Ali as a three-time heavyweight champion of the world. Only Evander Holyfield, the four-time heavyweight king, has held the title more.

Hearn and AJ’s 2023 plan is fundamentally sound. Three good fights, three good paydays and a path back to the heavyweight crown. It’s up to Joshua what he does with the opportunity of course. But as comebacks go, this one would be right up there with the best.

x
Suggested Searches:
The Sportsman
Manchester United
Liverpool
Manchester City
Premier League
More
boxing
Don't Wait Until Retirement To Appreciate The Hall of Fame-Bound...
Too often in life, we leave it too late to appreciate what we have. Sport is one of the guiltiest avenues [ ... ]
boxing
Boxing's First Tag Team Match And The Weirdest Combat Sports...
Combat sports is in a weird place. The most famous fighter on the planet is a YouTuber who has never [ ... ]
boxing
Anthony Yarde's Defeat To Artur Beterbiev Did More Good Than...
If a fight looks like Mission Impossible and sounds like Mission Impossible, sometimes it simply is [ ... ]
boxing
Caleb Plant Vs David Benavidez: Five Boxing Stories You Might...
With the afterglow of one big British card behind us in Liam Smith vs Chris Eubank Jr and the anticipation [ ... ]
boxing
Why Brave Anthony Yarde Is The Cure For The Common Boxer
In a world with four recognised sanctioning bodies, several unrecognised sanctioning bodies and a litany [ ... ]
boxing
Announcement Imminent: Anthony Joshua Vs Jermaine Franklin At...
Two-time unified heavyweight champion Anthony Joshua is reportedly set to fight Jermaine Franklin at [ ... ]
boxing
Artur Beterbiev And The Hardest Hitting Light-Heavyweights In...
Boxing fans will be treated to one of the hardest-hitting match-ups of the year this weekend when unified [ ... ]
boxing
Floyd Mayweather Vs Aaron Chalmers: Everything We Know So Far
Floyd Mayweather will return to the ring next month to take on former Geordie Shore star Aaron Chalmers [ ... ]
boxing
Boxing's Doomed Superfight: The Long Road To Josh Taylor Vs...
One of the most hotly anticipated fights in British boxing has been delayed yet again. WBO super lightweight [ ... ]
boxing
See You At The Crossroads: What Next For Chris Eubank Jr And...
Liam Smith vs Chris Eubank Jr had all the hallmarks of a crossroads fight. While they are only a year [ ... ]
boxing
Artur Beterbiev Vs Anthony Yarde: Everything You Need To Know...
Boxing fans will be treated to one of the hardest-hitting match-ups of the year this weekend when unified [ ... ]
boxing
Mersey Beat: Liam 'Beefy' Smith Stuns Chris Eubank Jr With Fourth...
Liam Smith stunned Chris Eubank Jr at the Manchester Arena, stopping the pre-fight favourite in four [ ... ]
boxing
Poles Apart: Richard Riakporhe Stops Two-Time World Champion...
Richard Riakporhe scored the biggest win of his career so far, steamrollering former two-time world [ ... ]
boxing
Leave The Memories Alone: Kell Brook Shouldn't Return To Face...
Boxxer CEO Ben Shalom says former IBF welterweight champion Kell Brook is “desperate” to [ ... ]
boxing
Citizen Of The World Alex Dilmaghani Focused On Global Domination
“Why don’t they play football? This is a sport where you get hit and hurt. The way some [ ... ]
boxing
The Day Ali Talked A Suicidal Man Down Off The Ledge Of A Beverly...
Wilshire Boulevard in Los Angeles cuts right through the heart of Beverly Hills. One particularly famous [ ... ]
boxing
Lucrative February Showdown Between Jake Paul And Tommy Fury...
Could it be third time lucky for a blockbuster showdown between Jake Paul and Tommy Fury? Well, according [ ... ]
boxing
''I Shook Up The World!'': The Moment Cassius Clay Truly Became...
On what would have been his 81st birthday, it is only appropriate to pay tribute to the cultural [ ... ]
boxing
Chris Eubank Jr Vs Liam Smith: Everything You Need To Know
Chris Eubank Jr and Liam Smith kick off the New Year in style this weekend when they descend on the [ ... ]
boxing
How To Watch KSI Vs FaZe Temperrr: Undercard, Time, Venue And...
The show must go on. After Dillon Danis’ withdrawal, KSI will now fight gaming YouTuber FaZe Temperrr. [ ... ]
boxing
Australian Heavyweight “One Of The Frontrunners” To Fight Anthony...
Two-time heavyweight world champion Anthony Joshua is expected to return to the ring in April looking [ ... ]
boxing
KSI Vs FaZe Temper: Everything You Need To Know
KSI returns to the boxing ring this weekend as the latest Misfits card hits Wembley Arena. The YouTuber-turned-boxer [ ... ]
boxing
All Aboard: Get On The Jesse 'Bam' Rodriguez Hype Train Before...
You can count on one hand the boxers who had a better 2022 than Jesse ‘Bam’ Rodriguez. The [ ... ]
boxing
Women's Boxing Picks Up Where It Left Off In 2022 With A Huge...
If you thought women’s boxing was leaving its big, history-making nights in 2022 then think again. [ ... ]
boxing
Manny Pacquiao Signs For Rizin, But Are Exhibitions Damaging...
Manny Pacquiao has announced he will return to the ring for Japanese MMA company Rizin Fighting Federation [ ... ]
boxing
Look Out Spence And Crawford: Could 2023 Be The Year Of Jaron...
Jaron Ennis returns to the ring on Saturday 7th January, ready to kick off what could be the defining [ ... ]
boxing
The Panel: Should Boxing Have One World Champion Per Division?
Welcome to The Panel, where we speak to a group of star names from across the fight game about the big [ ... ]
boxing
Auld Lang Syne Of The Times: Boxing's 2023 New Year's Resolutions
With Christmas out of the way, as we emerge from our turkey-comas and blink into the light of 2023, [ ... ]
boxing
From ‘Bam’ To ‘Big Baby’ - Five Boxers to Keep An Eye On In...
Another year in the ring is about to come to a close. We’ve already run through our favourite [ ... ]
boxing
Why Natasha Jonas Is The Sportsman's Women's Boxer Of The Year
2022 was truly the year of women’s boxing. Katie Taylor and Amanda Serrano headlined Madison Square [ ... ]