Football
News
The Portuguese star has been hauled off in successive games by the Juve boss
Graham Ruthven
09:00, 17 Nov 2019

Juventus needed a goal. But Maurizio Sarri decided that Cristiano Ronaldo, arguably the finest goalscorer of all time, wasn’t what his team required to get it.

In back-to-back games against Lokomotiv Moscow and AC Milan, with the Bianconeri being held late on, the Portuguese forward was withdrawn. Walking past Sarri on his way to the bench, Ronaldo reacted just as you would expect him to - unfavourably.

A lot has been made of this in the Italian press. Many have taken it as proof of a divide opening up between Juventus’ best player and their new manager. To come to such a conclusion might require something of a leap since Ronaldo has reacted in a similar way to being substituted before. But, in fairness, this time feels different.

This sort of strife was always likely between Ronaldo and Sarri. As football people, in terms of the way they see the sport, they are very different. On the one hand you have a player who has tuned his game to be as effective, efficient and productive as possible. Everything Ronaldo does, he does to ensure that he keeps winning - and scoring.

On the other hand, though, you have a coach who values more than just winning. That has always been Sarri’s biggest weakness, but also his biggest strength. He values his philosophy, his modern, dynamic style of play, just as much as the end outcome. That goes against the grain of Ronaldo’s very being as a football player. 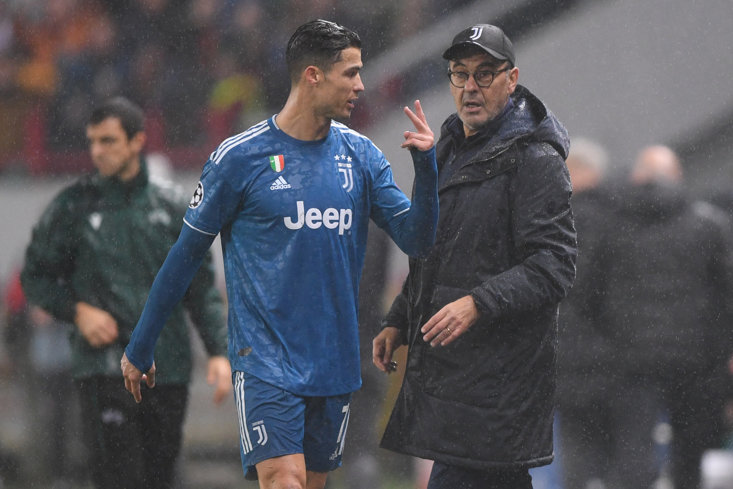 There is a disconnect between the train of thought that led Juventus to the £99.2 million signing of Ronaldo in the summer of 2018 and the one that led them to the appointment of Sarri.

The addition of Ronaldo was a symbol of the club’s determination to win the Champions League. Having come so close in recent years, they saw the Portuguese forward as the perfect man to make them winners. And yet just one year later Juventus seemingly valued more than just winning, turning to Sarri over someone who would offer a stronger guarantee of continued silverware. Would Ronaldo have made the move to Turin with someone like Sarri in charge at the time of his signing? Would he have had second thoughts?

At Chelsea, Sarri struggled to get the best from the out-and-out centre forwards he had in his squad, with Olivier Giroud, Gonzalo Higuain and Alvaro Morata all flopping. That doesn’t necessarily bode well for Ronaldo.

The philosophical differences between the two men meant strife was always likely. Now, it is bubbling to the surface.