It has been the shortest of seasons, yet the longest of seasons, for Chelsea as much as anyone else. But after their 1-0 win over Manchester City on Saturday night they are champions of Europe again. Just as happened in 2012, they overcame the turmoil of a managerial change on the way to getting the job done.

Thomas Tuchel came in during a Covid-affected campaign with little in the way of a run-up, replacing Frank Lampard mid-season and knowing that his new Chelsea overlords are not the type to get too attached to their coaches. But their Champions League final victory was a perfect example of what he has added to a squad which had boasted talent but lacked teeth.

The German made an immediate impact with a lengthy unbeaten run but it could all have counted for nought following their FA Cup final defeat to Leicester City and their loss to Aston Villa on the last day of the Premier League season. But for Tottenham’s simultaneous win at Leicester, Chelsea would have been heading to Porto on Saturday needing to win to return to the Champions League.

That was not what Roman Abramovich et al had had in mind when bringing Tuchel on board in January.

But on the big night in Portugal, they got what they were after. Tuchel set his side up perfectly to deal with Pep Guardiola and City, just as he had in their FA Cup semi-final meeting in April. Whereas Pep overthought his selection, going without a number nine and with no defensive midfielder, his opposite number got the balance just right.

The much-maligned Timo Werner had three chances in quick succession early on for Chelsea, first completely miscuing from close range, then shooting straight at Ederson, before a third effort hit the side netting via a deflection. At the other end, Antonio Rudiger did brilliantly to block Phil Foden’s poked finish in City’s only real threat.

And by shortly before half-time, Chelsea had the lead they deserved.

Mason Mount dug out a wonderful pass from deep which split open the City defence, and when Oleksandr Zinchenko failed to track Kai Havertz the German was able to knock the ball past an onrushing Ederson and slide it into the empty net. 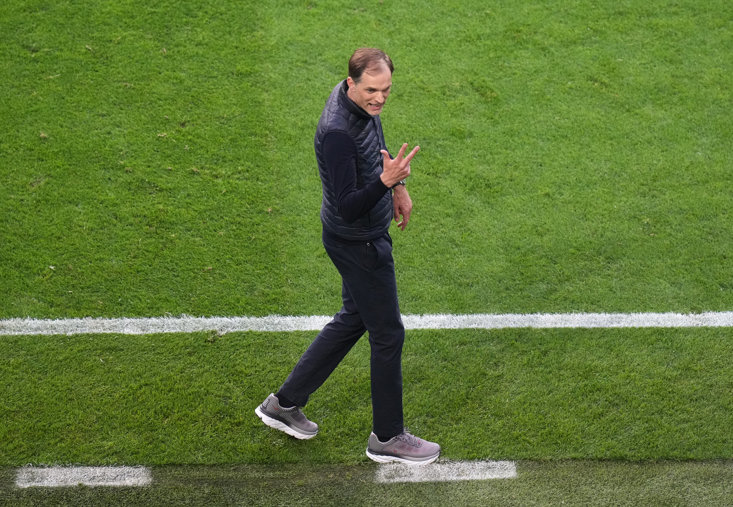 After the goal – just as before it – there was a pulse about Chelsea’s structure, it contracted and expanded as and when needed. City would try to poke balls through apparent holes, but Tuchel had his side so well drilled that half of City’s passes looked as likely to be intercepted for counter-attacks as they were to cause Chelsea any problems.

On the break, Chelsea could have finished it off when Christian Pulisic arrived at the far post but sent the ball wide of Ederson’s net, and with Guardiola introducing Fernandinho and departing hero Sergio Aguero there will have been a worry that City were about to step up.

Yet Tuchel’s Chelsea is made of incredibly stern stuff. With N’Golo Kante covering every blade of grass, theirs is an approach which demands constant effort throughout. They even overcame the first-half loss of centre-back Thiago Silva, with Andreas Christensen coming on and plugging the gap to great effect. This was an all-round performance which bore the teeth as well as the talent.

Barely nine months ago, Tuchel was a losing Champions League finalist with Paris Saint-Germain. He had his foot in a protective boot after breaking a metatarsal on the training ground weeks earlier and was having to deal with a difficult relationship between himself and the PSG board which would result in his firing soon after.

But in 2021, Tuchel has bounced back off the canvas and led Chelsea to the top of the European game just when people were justifiably wondering whether his stay in west London would prove to be a short one. Now, with the likes of Mount, Havertz, Pulisic and more in their line-up, and with this collective experience under their belts, there’s every reason to expect more to come from the new European champions.