Football
News
Southampton and Ralph Hasenhuttl have been here before and they know what they have to do
Elliott Bretland
13:00, 03 Feb 2021

Ole Gunnar Solskjaer was beaming after seeing his Manchester United team steamroll their way to a 9-0 victory over Southampton - equalling the Premier League record - and insisted they had rediscovered their mojo.

Spare a thought, however, for Saints boss Ralph Hasenhuttl, who rediscovered an all too familiar feeling of dejection, shock and embarrassment, overseeing a thrashing of the same scoreline for the second time in just 15 months. It was back in October 2019 that Southampton were hammered 9-0 at home by a Jamie Vardy-inspired Leicester, and this time around they had no answers to the probing of Bruno Fernandes, Anthony Martial and Co. at Old Trafford.

Yes, they will turn into an internet meme for the next few days, and rivals Portsmouth even took the opportunity to tease them by congratulating United, but Southampton are no joke.

Hasenhuttl and his charges will be hurting but the two defeats are a freak pair of results. To look at the results in isolation, one would assume Southampton are marooned at the bottom of the Premier League table, no-hopers doomed for the drop. But no, they actually sat first on 9 November, even beating champions Liverpool along the way. 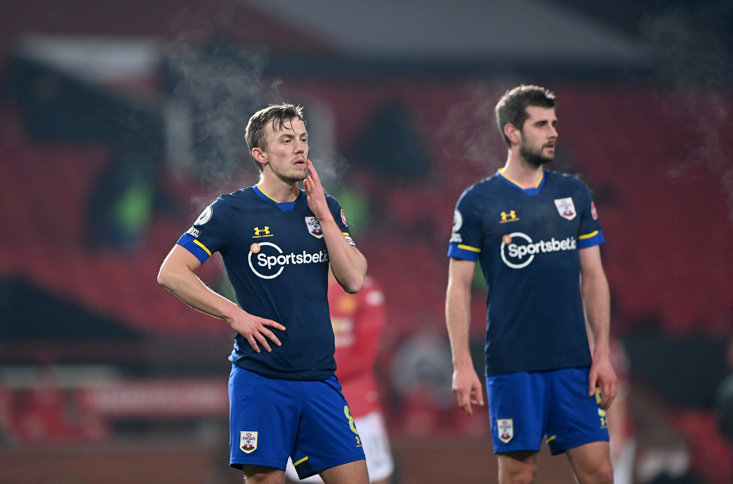 In each drubbing, Southampton had a man sent off very early on - youngster Alexandre Jankewitz was joined by Jan Bernarek in taking an early bath, leaving the team with nine players by the end against United - and a slew of late goals turned a tonking into humiliation.

“We lost again in a horrible way. The same story: one man down and 90 minutes can be long," Hasenhuttl said. “The lads had no alternatives - no players on the bench, no alternatives to defend better. In the end, it's a different situation to the first time.

"It hurts more to have this result again. But the team is a different one now and we've had a good season so far. Let's see how the season ends."

The humbling by Leicester at St Mary’s was actually a catalyst for Southampton and it pushed them on. Having played three at the back until then, Hasenhuttl quickly switched to four in defence - as he had done at Leipzig - and it steadied what appeared to be a sinking ship. Danny Ings’ goals then allowed the Austrian to get a firm grip of the helm and he steered them from rocky waters to finish 11th.

This season, they have looked organised and dangerous, a club on the up again. Hasenhuttl, who had nine players out injured this time around, will lick his wounds but he’ll rally his team and they’ll recover quickly. They’ve been here before and they know what they have to do. They’ll get their heads back down, work hard and rectify it when they go to face Newcastle on Saturday.