The two sides had been trading blows in equal measure until the superstar full-back, a surprise addition from St Helens in the off season, brought the home fans to their feet at Craven Park with a pair of crucial tries which left the visitors with little answer.

Tony Smith will be delighted with his side’s victory, particularly their stubbornness defence, with only a single try having now been conceded in 120 minutes on the way to a Challenge Cup semi-final and the latest bragging rights in the city of Hull.

In a cagey first half it took 29 minutes for the deadlock to be broken, with Lachlan Coote putting in a grubber behind the FC defence for Ryan Hall to pounce on in the corner and give the home side the lead.

But the visitors bounced back almost immediately when Josh Griffin made a half-break and, with Ethan Ryan clinging on to his shirt tails, the Hull centre managed to find Josh Reynolds inside him for the score. Luke Gale’s conversion attempt from just to the left of the sticks hit the upright to keep the two sides even at 4-4 going into the sheds. 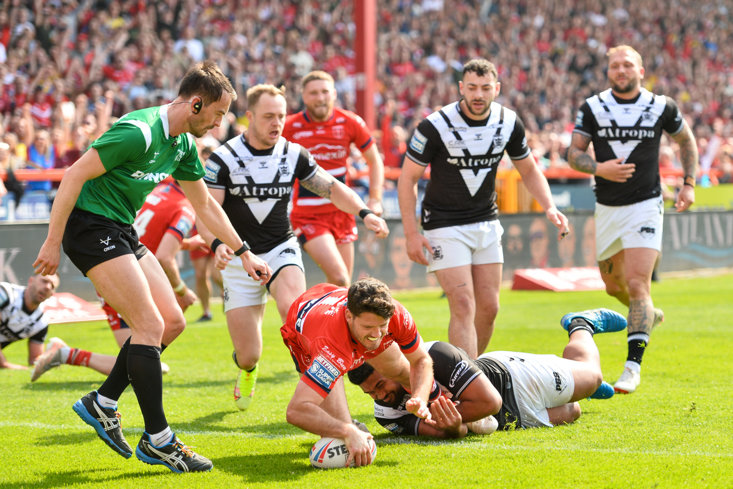 COOTE CRASHES OVER FOR HIS FIRST TRY OF THE AFTERNOON

Rovers got a lucky break early in the second period when Darnell McIntosh was adjudged to have knocked on from Jordan Abdull’s spiralling bomb, and from the resulting scrum Sam Wood broke two tackles and found Coote inside him for a try which the Australian full-back converted himself.

And before long he was crossing for a second, with FC’s poor chase of a Luke Gale kick being punished by a great Ethan Ryan break which ended with a pass to Coote on halfway for the former St Helens man to make a clear run to the line.

From there Rovers took control, giving Hull very few looks at their 20. Meanwhile, Brett Hodgson’s visitors were wasteful in possession as they tried desperately to force the issue.

Rovers might have scored again, with Coote on for a hat-trick, but he was denied for a cover tackle as Rowan Milnes attempted to get clear enough to take an inside pass.

The full-time hooter sparked joyous scenes at Craven Park, with the home side back on top in the derby after three successive defeats over the course of the two Covid-affected seasons of 2020 and 2021.

The result takes Rovers up to seventh, level on points with their fifth-placed neighbours after eight rounds.