Boxing loves a rematch. The fight game puts on more sequels than the Marvel Cinematic Universe. Whether they are made because the initial result was close or controversial, through contractual obligation or because the first fight was incredibly entertaining; boxing and rematches go together like Daphne and Celeste.

But not every fight that deserves a second go-round actually gets one. Pugilistic history is littered with bouts that seemed to cry out for another look but never got one. The Sportsman has narrowed it down to five bouts that were doomed to remain one-and-done.

‘Buster’ shocked the world in 1990 when he stopped seemingly-invincible heavyweight freight train ‘Iron’ Mike Tyson in ten rounds at the Tokyo Dome. A rematch seemed to be a given. Douglas was a fringe contender who had become an overnight sensation off the back of his win. Tyson had been beaten for the first time, and a revenge mission seemed logical.

Instead, Douglas fought Evander Holyfield and lost his newly-won heavyweight championship in three rounds. Considering ‘Buster’ turned up for that fight overweight and displaying all the mobility of a potato, it seems a lock that Tyson would have steamrollered him in a rematch. This opens a splinter universe where Holyfield has to wait for his first title, and where Tyson’s 1992 jailing for rape possibly arrives when he is the reigning heavyweight champion of the world.

Klitschko took a fight with WBC heavyweight champion Lewis on short notice after original opponent Kirk Johnson pulled out. Lewis had tried to get Mike Tyson, who he had stopped in eight rounds the year before, to fill the date. After six brutal rounds in the company of ‘Dr Ironfist’, he probably wished Tyson had answered the phone.

Klitschko gave Lewis the toughest test of his reign, rocking him in the second round in a classic shootout. The fight was stopped after Lewis opened a gruesome cut on the Ukrainian’s eye. Vitali insisted he could fight on, but the severity of the gash gave him an air of the damaged T-800 from The Terminator.

Lewis postured towards a rematch, but ultimately delayed it before announcing his retirement the following year. Given the torrid time the Brit had with Klitschko, this was probably the best move. He had beaten Vitali fair and square and, after defeating generational greats Tyson and Evander Holyfield, had very little left to prove. A rematch could have given Lewis’ career a far bleaker end than anyone wanted to see. 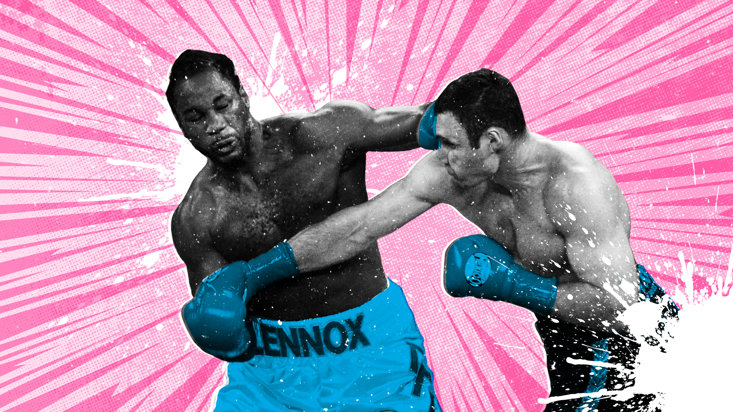 What do you do if you’ve just staged perhaps the greatest fight in boxing history? Nowadays, the ink would be dry on the rematch contract before the ring canvas had been swept clean. But after the three absorbing rounds Hagler and Hearns shared in 1985, no return bout was forthcoming.

This rematch not happening was due to timing more than anything. Hagler defended his middleweight title next against John Mugabi and had such a torrid time of it that it inspired ‘Sugar’ Ray Leonard to come out of retirement to fight him. Hagler met Leonard and then retired in the wake of losing a decision he would dispute for the rest of his life. From a simple numbers perspective, Leonard was the most lucrative fight out there for Hagler. He took that rather than a Hearns rematch, and his resulting retirement saw a sequel against ‘Hitman’ forever fade from view.

Another lost rematch featuring a Klitschko brother, this time younger sibling Wladimir. ‘The Gypsy King’ stunned the boxing fraternity when he out-boxed and out-foxed ‘Dr Steelhammer’ to take the unified heavyweight crown in 2015. A rematch was scheduled, but due to Fury’s ensuing substance and mental health issues, the bout never came to fruition. Fury retired and by the time he re-emerged just under three years later, Klitschko had retired.

Wladimir himself did not fight for a year and a half after the defeat. Even allowing for aging and ring rust, he gave ‘AJ’ the toughest night of his young career up to that point. Would a fresher Klitschko have been able to reclaim his title from Fury if they had fought in the months following their 2015 bout? We will never know, but his efforts against Joshua suggest he would have given it a real go.

The most lucrative boxing match of all-time seemed to cry out for a sequel. While the bout was hardly as thrilling as it was billed, there was enough money to be made in going again. Pacquiao’s shoulder injury also planted enough doubt to warrant another go.

Those who remember the long and drawn-out negotiations for their first fight will understand why a second was never sanctioned. Mayweather had his win and would need incredible remuneration to be convinced to fight his rival again. Once he realised he could make money for old rope after making an astronomical payday against UFC star and boxing debutant Conor McGregor, any Pacquiao rematch was dead in the water.