Sports
News
From the FA Cup to the Bledisloe Cup, it's been another busy weekend in the world of sport
Kris Voakes
14:30, 09 Nov 2020

Mike Tyson and Evander Holyfield could be about to take us back in time, while the Wallabies made a statement of intent and Steven Gerrard’s Rangers took another big step in Scotland. Here are five stories you might have missed over the weekend…

TYSON-HOLYFIELD 3 COULD BECOME A REALITY

The first meeting ended with Evander Holyfield reclaiming the WBA Heavyweight title in the 11th round. The second… well, that one went down in history after Mike Tyson infamously bit a chunk out of his opponent’s ear. But 23 years on from their last encounter, they could be set to get in the ring together once more.

Tyson admitted this weekend that he would be open to facing ‘Real Deal’ Holyfield for a trilogy fight once he has fought Roy Jones Jr in his eagerly-awaited comeback fight on 28 November. Asked about Evander’s desire to return to the ring for a third fight with him, Tyson told Monday Night Football’s Jim Gray, “That’s always something we can do if the people want it, if it’s pragmatic enough, I’d love to do it.”

Are we set for a ‘throwback’ third fight? Who’d say no to that?

The Bledisloe Cup looked set to fizzle out to a damp-squib ending after New Zealand’s back-to-back wins in Games 2 and 3 had clinched the trophy for an 18th consecutive year, but Australia’s 24-22 win in Game 4 on Saturday ensured that some real intrigue remains in the old rivalry following on from their 16-16 draw in the opening encounter of the series.

Despite the dead-rubber nature of the game, it contained plenty of fire as Lachie Swinton and Ofa Tu’ungafasi both saw red in the first half, reducing both teams to 14. And while the All Blacks still took the series, a first win under Dave Rennie could prove significant as the new-look Wallabies aim to climb to the top of world rugby once more. There is increasing belief down under that this Australia side could seriously challenge the likes of South Africa, England and the All Blacks in the current World Cup cycle, and Saturday’s performance certainly adds weight to the growing argument. 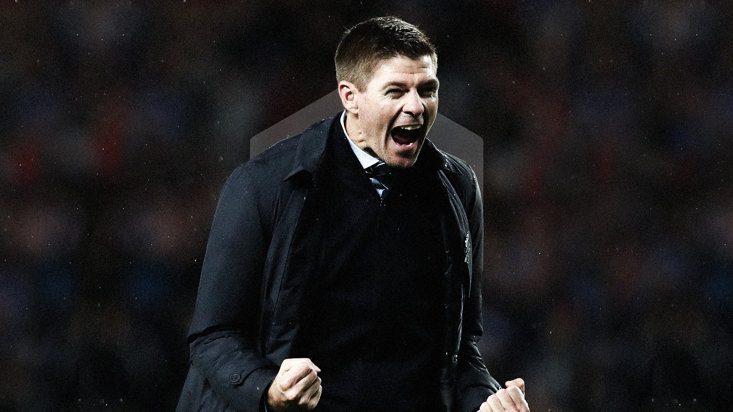 As if the recent 2-0 away win in the Old Firm game wasn’t enough of a sign, Rangers’ 8-0 thrashing of Hamilton on Sunday further reiterated the belief that Steven Gerrard’s side are ready to end Celtic’s nine-year dominance of the Scottish Premiership this term.

The hammering of a bottom-of-the-table side would not normally be made such a big deal of, but the relentless manner of the Gers’ display immediately after Celtic had recorded a key 4-1 win at Motherwell said much about the new determination that there appears to be in the Rangers ranks this year.

In his third season in charge at Ibrox, Gerrard has now built a squad which could be ready to finally outdo their city rivals. And as he looks to build up his coaching reputation ahead of potentially assuming the reins from Jurgen Klopp at Liverpool in the years to come, there would be nothing better to add to his managerial CV than ending Celtic’s dreams of a record 10-in-a-row.

It wasn’t the most convincing of victories, but the Pittsburgh Steelers made club history on Sunday as they extended their unbeaten start to the season to eight games with a narrow 24-19 win over the Dallas Cowboys.

Their previous best mark of 7-0 was set back in 1978, while no other team in the NFL this season has managed to remain unbeaten to this point. They remain underdogs to reach the Super Bowl in February due to the need to get through the 8-1 Kansas City Chiefs in the AFC, but for now the Steelers are revelling in becoming club legends.

“I’m really proud of our football team, 8-0 for the first time in franchise history, we’re humbled and honoured to be that group,” coach Mike Tomlin told reporters after the game.

Ben Roethlisberger again came through big for the Steelers, throwing three touchdown passes and completing 29 of 42 attempts for 306 yards as he outduelled the Cowboys’ stand-in quarterback Garrett Gilbert.

There is an increasing gap between the best and the rest these days, and this year there aren’t even any replays to give teams a second chance at a big upset, but the FA Cup continues to serve up some unparalleled magic.

Marine’s sensational penalty win at Colchester United highlighted the old competition’s never-ending ability to surprise as the eighth-tier minnows beat a League Two outfit away from home, while 10-man Barnet took out League One Burton Albion and Solihull Moors bested Scunthorpe United as a host of non-league clubs reached the second round.

But the biggest thrills and spills happened at Plainmoor, as Crawley Town came from two goals down, then netted another equaliser in the 21st minute of injury time - yes, 21st minute, due to a lengthy injury stoppage - only to fall 5-3 behind in extra time and then score three times in 10 minutes to eventually overcome Torquay United 6-5.

x
Suggested Searches:
Tyson Fury
Manchester United
Marcus Rashford
Lewis Hamilton
F1
Air Jordan
More
sports
No Passion, No Point: Eddie Hearn's Podcast Returns For Third...
He’s now as popular, big, and perhaps as bombastic as the boxers he promotes. Eddie Hearn is also [ ... ]
sports
With 100 Days To Go, Team GB Are Already Set For A Historic...
With 100 days until the delayed Tokyo Olympics, Team GB look set to make history before they have even [ ... ]
sports
Ranking The Best And Worst April Fool's Day Pranks From The...
So another April Fool’s Day has come to an end and as the sun sets on what for some jokers is [ ... ]
sports
The Good, The Bad And The Downright Ugly, What Happens When...
Italian giants Inter Milan have revealed a brand new club badge ahead of the Nerazzurri’s 113th [ ... ]
sports
Ahead Of Hendry Vs White, Here Are The Sporting Rivalries We’d...
As Stephen Hendry and Jimmy White are all set to rekindle their famous old snooker rivalry having been [ ... ]
sports
From Bruno Vs Tyson To Last Chance U: Five Must-See Sports Documentaries...
Rejoice! The end of lockdown is nearly in sight. Sadly, there’s still plenty of time until things [ ... ]
sports
From Eddie Hearn To Jamie Carragher, Here Are Five Must-Reads...
It’s the first Thursday of March and that can only mean one thing: It’s World Book Day. [ ... ]
sports
Amateur Sport To Be Allowed In England From 29 March
Outdoor grassroots sports will return in England from 29 March, prime minister Boris Johnson confirmed [ ... ]
sports
Brady's Bromance, Nadal's City Of Love And The Greatest Love...
Roses are Red,  Violets are Blue, We live for sport, And we know you do, too! Valentine’s [ ... ]
sports
Messi Reaches Goal Number 650 At Barca, Five Weekend Stories...
Lionel Messi continued to boggle the mind with the 650th goal of his Barcelona career, Patrick Reed [ ... ]
sports
The Socially Distant Sports Bar Is Like Being In The Pub With...
The day will come. We’ll be back. The beloved British pub will fling its doors wide open once [ ... ]
sports
The Six-Day Plan That Can Turn You Into A Hollywood Hardman...
Is there an actor who represents the quintessential British hardman better than Jason Statham? Probably [ ... ]
sports
It’s Mahomes vs Brady At The Super Bowl, Five Sport Stories...
In a weekend which saw UFC 257 and the FA Cup grabbing a lot of attention, there was plenty of other [ ... ]
sports
Daniel Craig's Full-Body Bond Workout That Will Turn You Into...
The release of No Time To Die is a bittersweet one. On the one hand, after months of Covid-induced delay, [ ... ]
sports
The Super-Quick Routine Jason Mamoa Used To Get Ready For Aquaman
Is Jason Mamoa the coolest actor in the world? Maybe. The Guinness swigging, axe-hurling Hawaiian actor [ ... ]
sports
Max Holloway Is A UFC Record-Breaker, Five Weekend Stories You...
All the attention might have been on the anti-climax that was Liverpool vs Manchester United this weekend, [ ... ]
sports
From Fernando to Maradona, These Are Five Of The Best Sports...
Yep, back again. Nope, not out and about, meeting up with our mates or heading to the football but instead [ ... ]
sports
The Five Key Moves Cavill Uses To Get In Supernatural Shape...
Netflix’s TV series adaptation of The Witcher proved to be one of the most popular shows to land [ ... ]
sports
Work Out Like A WWE Superstar With John Cena’s Five-Day Training...
He’s widely regarded as one of the greatest professional wrestlers of all-time, has nearly 15 [ ... ]
sports
Conquer Those New Year Resolutions With These Five Fantastic...
During the first quarter of 2020 fitness apps were downloaded a staggering 593million times. Factor [ ... ]
sports
Work Out Like Hollywood’s Hardest Worker, Mark Wahlberg, With...
Mark Wahlberg hits the big 5-0 this year, and in those five decades the man from Boston, Massachusetts [ ... ]
sports
Why The History Channel’s Arctic Edition Of Alone Is Unmissable...
There have been a plethora of crazy TV series in recent years, take The World’s Toughest Race  [ ... ]
sports
Cheeky Chappie Jimmy Bullard’s Fishing Pod Is A Remarkably Down...
Fishing is one the sports that has seemingly proven immune to COVID-19 restrictions. You’re (usually) [ ... ]
sports
The Women’s Six Nations, Eubank Jr And Trump Are The Weekend's...
We may all be stuck inside but sport is continuing for now, which means some things may have slipped [ ... ]
sports
Boost Your New Year Goals With These Five Essential Bits Of...
Running is one of the simplest forms of exercise someone can do to stay in shape but that doesn’t [ ... ]
sports
In Time To Play Hulk Hogan, Here's How Chris Hemsworth Got God-Like...
Chris Hemsworth took Instagram by storm in November when a picture posted by the Australian actor, of [ ... ]
sports
The Weight-Lifting Workout Brad Pitt Used To Create His Fight...
It’s been more than twenty years since the David Fincher masterpiece Fight Club premiered for [ ... ]
sports
Build Muscle And Burn Fat With These Three Bodyweight Routines...
Health kicks can certainly be expensive but that doesn’t mean that they have to be. Sure, if you’re [ ... ]
sports
Steph Curry Hits Career Best, Five Weekend Sport Stories You...
Steph Curry continues to set the pace in the NBA, there was drama, controversy and recrimination on [ ... ]
sports
Olympic Skier Graham Bell’s Positive Podcast Makes Sure You...
Graham Bell is used to navigating slippery slopes. The former Olympic skier who once hit a top speed [ ... ]