The octagon returns home to the T-Mobile Arena in Las Vegas, with two titles up for grabs as Jon Jones takes on Anthony Smith, whilst Tyron Woodley looks to retain his welterweight crown against Kamaru Usman.

UFC 235 is stacked from top to bottom, with Robbie Lawler and Ben Askren doing battle in a welterweight match up. Former bantamweight king Cody Garbrandt returns to action against Brazilian Pedro Munhoz and Jeremy Stephens aims to derail the momentum behind Russia’s Zabit Magomedsharipov.

After the early start blessing that was UFC Prague, we’re back to the usual 3AM main card slot across Europe. Let’s take a look through the bets that can make your Sunday morning a memorable one!

Anthony Smith may not be a household name to casual fans, but ‘Lionheart’ certainly made his mark on the shallow light heavyweight division last year. Smith racked up three wins, with three finishes after moving up from middleweight and sits within reach of UFC gold.

The only problem for Smith is that Jon Jones is stood across the octagon from him. The thirty-one-year-old is widely (and controversially) considered the greatest of all time and Smith is considered to be one of the biggest underdogs in UFC history.

Jones has dismantled every contender at 205lbs, with a long-touted move to heavyweight on the horizon, and it’s hard to see how Smith overcomes a huge technical discrepancy alongside an eight-inch reach advantage for Jones.

Smith will want to come out swinging early to try and stop Jones, but I think Jones will look to weather the storm before putting the challenger away in the third round.

ESPN Stats & Info
@ESPNStatsInfo
Jon Jones returns to the Octagon at UFC 235 tonight to make the first defense of his UFC light heavyweight title against challenger Anthony Smith.
Jones is unbeaten in 15 consecutive fights (14-0, 1 NC), one behind Anderson Silva for most all-time. 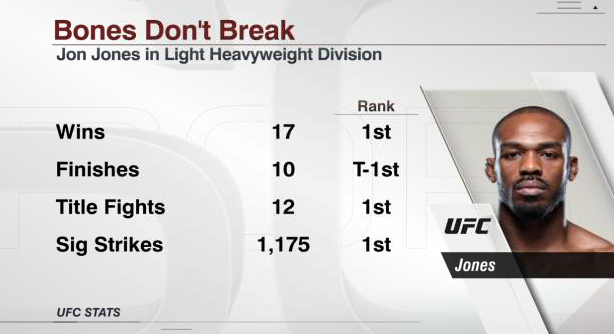 Zabit Magomedsharipov vs. Jeremy Stephens
Zabit Magomedovsharipov to win by decision – 6/4 (SkyBet)
Zabit vs. Stephens to win Fight of the Night – 7/2 (SkyBet)

Two bets for one fight! I usually try to stay away from placing too much betting reliance on one bout, but this fight just has fireworks written all over it!

Zabit Magomedsharipov has been nothing short of a revelation since joining the UFC, and those who followed his earlier exploits under the ACB banner were not surprised! The Russian has a technically well-rounded game, with every element from his striking to his judo being so dynamic and diverse.

Jeremy Stephens has been the gatekeeper of the featherweight division for the last four years, losing out to the top tier opponents such as Max Holloway, Frankie Edgar and Jose Aldo. Stephens, who most may know from his verbal attack by Conor McGregor, will hope to become the first man in the octagon to defeat Zabit.

I see this being a great fight, with Stephens being a recipient of the fight of the night bonus five times and Zabit once… they are the perfect dance partners! I think Stephens is too tough for Zabit to finish, but the Russian will win on the scorecards. Tune in around 02:30 for this one!