Ufc
News
Betfred's Kevin Tsang gives us his breakdown of a jam-packed card in Houston this weekend
Kevin Tsang
07:00, 15 May 2021

It’s been more than three years since we have seen anyone other than Khabib Nurgmagomedov wear the UFC lightweight belt. However, on Saturday night we will see either Charles Oliveira or Michael Chandler become the new king of the lightweight division.

UFC 262 will also feature two other formidable lightweights, Tony Ferguson and Beneil Dariush who will co-main the event. Betfred’s Kevin Tsang gives us his breakdown of #UFC262.

Where, when and how can I watch it?

UFC 262 is scheduled to take place on Saturday, May 15 and is being held at the Toyota Centre in Houston, Texas. It will be broadcast live on BT Sport 1 in the UK.

The early prelims start at midnight and the main card will kick off at around 3am BST. We expect the main event of Oliveira and Chandler to start at around 5am BST. 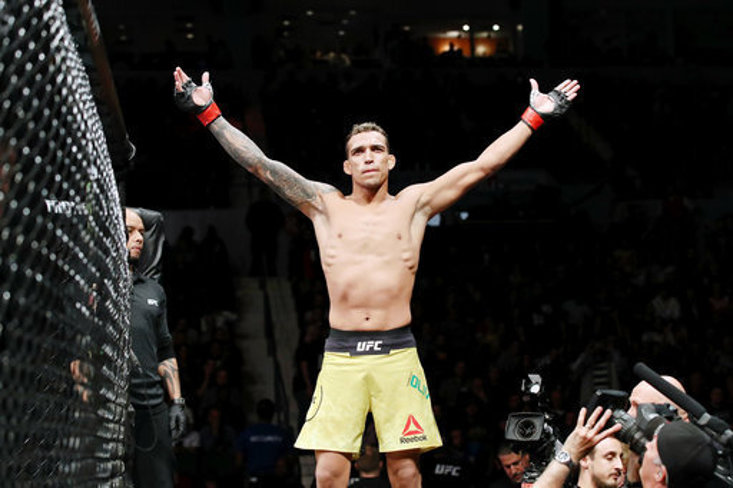 Currently on an eight-fight win streak, Charles Oliveira has his chance to become the 17th Brazilian division champion in UFC history. Oliveira’s last performance came against a dominating decision win against former No. 1 lightweight contender Tony Ferguson at UFC 256.

Oliveira was the early aggressor, firing shots and throwing feints to get inside. He eventually got his opportunity where he picked Ferguson up from the body lock and brought him on his back. This was followed by a couple of inside punches and elbows. A few moments before the horn sounded in the first round, Oliveira managed to position himself into an armbar attempt and the submission was completely locked in but through sheer heart, Ferguson was able to hold out till the end. From then on, Oliveira dominated Ferguson in all departments. 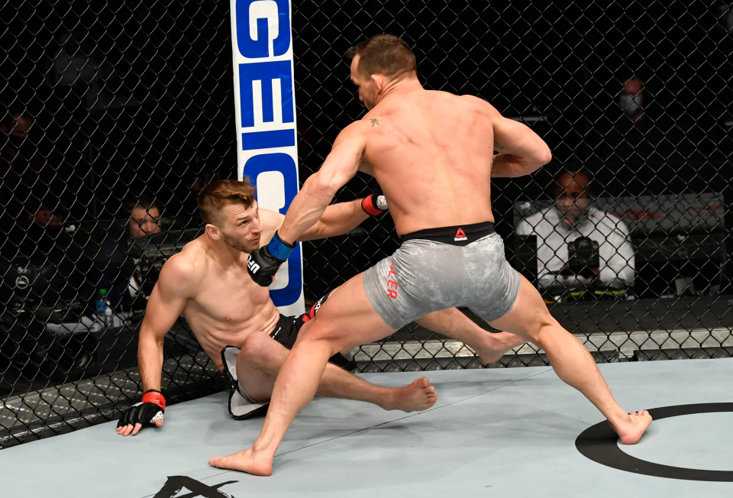 Michael ‘Iron’ Chandler stormed into the UFC with a first-round knockout of Dan Hooker in January. The three-time Bellator lightweight champion now has a chance to win UFC gold in just his second fight with the promotion.

With less than three minutes into his Octagon debut, the fight was as quick as you like. After feeling his opponent out, Chandler moved on the offense. With Hooker backing up, Chandler launched a devastating left hand which caught his opponent right on the button, followed by a barrage of punches to end the fight in 2mins 30 seconds.

Arguably one of the best grapplers in the world, Oliveira holds the UFC record for submission wins with 14. His striking has also improved with two of his last four wins coming by way of KO/TKO.

This will be a close fight, but I think Michael Chandler gets the job done. With his experience, I think Chandler will be able to get into the pocket and unleash his explosive power. Even if Oliveira is able to turn this into a grappling affair, I’m confident Chandler will hold his own as he was an NCAA Division I All-American wrestler with a good defensive wrestling ability and an underrated ground game. However, I don’t think this fight will go to the ground and therefore I predict a second round TKO victory for Michael ‘Iron’ Chandler. 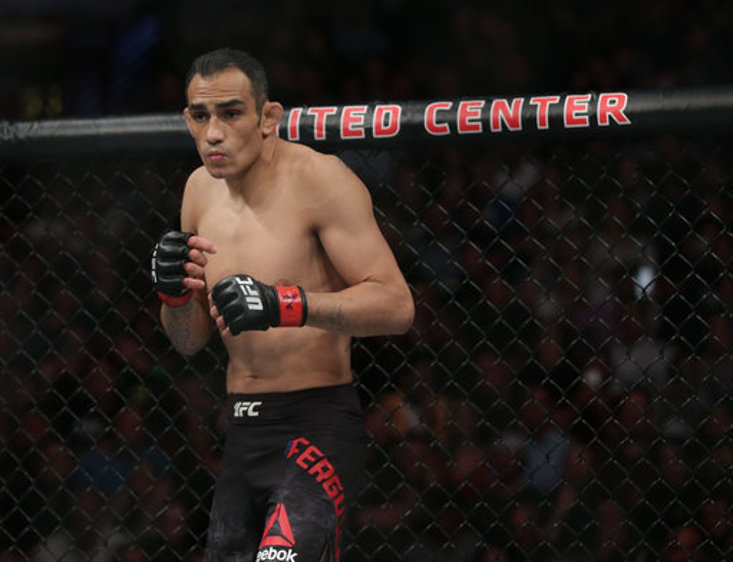 For the first time in his MMA career, Ferguson has lost two fights in a row and will be looking to rebuild towards another crack at a lightweight title shot and a win over his next opponent might just put him back in the frame. However, if he was to lose, Ferguson might miss his chance and be known as the greatest lightweight to never win the belt.

Ferguson’s last performance came against Charles Oliveira where his opponent dominated him on the ground. He showed a lot of heart to withstand Oliveira’s armbar attempt, took a lot of damage on the ground and that was pretty much it. Ferguson never got the opportunity to gain momentum and showed his famous illusive style that we are used to seeing. Instead, his energy was sucked up by a very talented grappler. 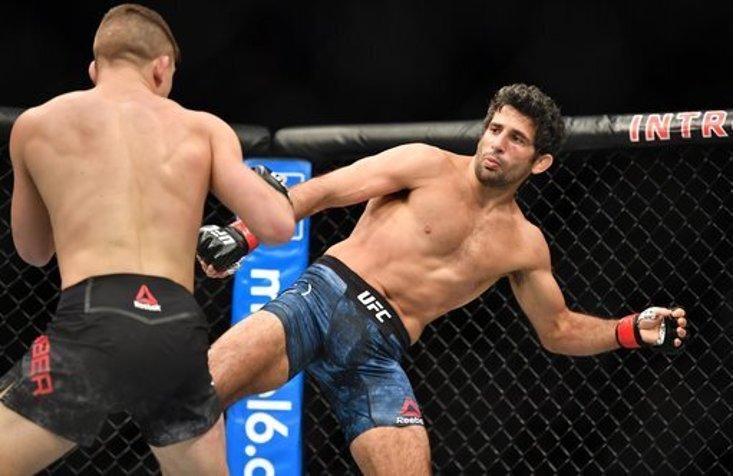 A veteran in his own right, with over 18 fights in the UFC, No.9 ranked lightweight Dariush is coming off a split decision victory over Carlos Ferreira. It wasn’t his greatest performance in my opinion, as it was wild and it could have gone either way.

Nevertheless, this was his six straight victory and his longest win streak in the Octagon. It’s fair to say he’s coming in fine form.

It’s safe to say this is a must-win for Ferguson if he has any chance to ever become lightweight champion of the world. In my opinion, Ferguson is one of the most entertaining fighters around, his illusive style, combined with unpredictable striking makes him incredible to watch.

However, one of his biggest drawbacks is that he’s a very slow starter. He’s well known for breaking down his opponents and wearing them out but this means he takes a lot of damage at the start of his fights. Therefore, the big question for Ferguson at 37-years-old is can he maintain this style of fighting? If he has any chance of winning this fight, he’ll need to tighten up his defence and start explosive from the start.

For Dariush, he is a well-rounded fighter who has vastly improved his Muay Thai and striking. He’s also an excellent grappler and loves to throw those overhand punches. My only worry is that he’s very wild in his exchanges, which opens him up to some dangerous combinations. Overall, he’s a very tough competitor and loves to take one to give one.

I think this could go down to a decision for either man, but I’ll give it Ferguson just solely based on experience.

x
Suggested Searches:
Manchester United
Liverpool
Manchester City
Marcus Rashford
Premier League
More
ufc
Your Guide To UFC 263, As Israel Adesanya Takes On Marvin Vettori
UFC 263 rolls into Arizona this weekend, with the small matter of a rematch between Israel Adesanya [ ... ]
ufc
Charles Oliveira Could Fight Conor McGregor In Brazil After...
Brazilian superstar Charles Oliveira could take on Conor McGregor in his homeland after he pulled off [ ... ]
ufc
UFC 261: Jorge Masvidal Suffers First Knock Out As Kamaru Usman...
If the build-up to UFC 261 was hyped up, the night itself exceeded all expectations. In a stunning main [ ... ]
ufc
Kamaru Usman Hints He Could Walk Away After UFC 261 Clash With...
UFC welterweight champion Kamaru Usman has suggested he could walk away from the Octagon after his main [ ... ]
ufc
UFC 261: All You Need To Know Ahead Of A Blockbuster Night In...
Fight fans are in for a real treat in the Octagon this weekend with UFC 261 serving up a blockbuster [ ... ]
ufc
Conor McGregor Cancels Dustin Poirier Trilogy Due To Dispute...
Conor McGregor has insisted his trilogy fight with Dustin Poirier is off after the pair were involved [ ... ]
ufc
New Lightweight Champion To Be Crowned At UFC 262 After Khabib...
It is looking increasingly likely that a new lightweight champion will be crowned at UFC 262 with Michael [ ... ]
ufc
UFC Set To Return In Front Of A Full Crowd With A Stacked Card...
After more than a year of coronavirus-induced capacity restrictions, the UFC is set to finally return [ ... ]
ufc
Four Champions And Three Undisputed Titles On The Line At UFC...
UFC 259 features four champions, as middleweight king Israel Adesanya moves up to 205lbs to battle the [ ... ]
ufc
Bold, Brash And Wealthy, Has Conor McGregor Simply Become Too...
Big and tough as he was, King Kong needed the Empire State Building; the big Silverback just wouldn’t [ ... ]
ufc
Everything We Know About Dana White And The UFC's Fight Island...
Ultimate Fighting Championship president Dana White has been vocal in his commitment to holding UFC [ ... ]
ufc
How Anime Fuelled Israel Adesanya's Ambition, Ability And Style...
Every so often, in every sport, a truly unique character arrives with seemingly the sole purpose of [ ... ]
ufc
Is Banking £1.5Million Per Second Enough To Keep Conor McGregor...
Find someone who looks at you the same way Dana White looks at Conor McGregor. Dana needs Conor. He [ ... ]
ufc
Donald 'Cowboy' Cerrone Is The Adrenaline Junkie Who Has Cheated...
Very, very few of us would dare take on Conor McGregor in a staring contest, let alone have the guts [ ... ]
ufc
''I Need MMA'' - Only The Octagon Can Bring Redemption For Conor...
Conor McGregor is back and, boy, is he glad. The Irishman returns to the cage this weekend to duke it [ ... ]
ufc
McGregor's Talk Of A Boxing Comeback Is Proof He's Running Out...
Conor McGregor is currently preparing for his comeback bout at UFC 246, which takes place at the T-Mobile [ ... ]
ufc
Conor Teams Up With His Boyhood Coach In Preparation For UFC...
Conor McGregor has turned back time as he looks to get the better of Donald Cerrone in UFC 246 on January [ ... ]
ufc
Masvidal Predicts Quick Win For Conor At UFC 246 To Set Up Blockbuster...
Jorge Masvidal, the number three ranked welterweight fighter in the UFC, has tipped Conor McGregor [ ... ]
ufc
Conor McGregor's Return Sells Out In 3 Minutes And Gate Reaches...
Tickets for Conor McGregor’s hotly-anticipated return to the UFC sold out within three minutes [ ... ]
ufc
Conor McGregor Calls Out ''Scurrying Rat'' Khabib Ahead Of His...
Conor McGregor is no stranger to a bit of trash-talking and he has ramped up his return to the UFC by [ ... ]
ufc
Conor McGregor Set To Duel It Out With 'Cowboy' Cerrone At UFC...
Conor McGregor will make his long-awaited return to the Octagon in the New Year by taking on Donald [ ... ]
ufc
Book Review: Chaos Is A Friend Of Mine
“There haven’t been too many like him in sport, and there certainly have been none like [ ... ]
ufc
Feeding The Canvas: Conor McGregor Responds To Dustin Poirier
Conor McGregor has hit back at former lightweight title challenger Dustin Poirier after the American [ ... ]
ufc
“Whatever Comes My Way, I Deserve It” Conor McGregor Breaks...
MMA superstar Conor McGregor has broken his silence on the video that emerged last week showing [ ... ]
ufc
UFC 239: Jon Jones: The Greatest?
As Jon Jones approaches his 32nd birthday and the tenth time in his career to defend his UFC Light Heavyweight [ ... ]
ufc
Former UFC Champion Conor McGregor In Hot Water Again After...
Conor McGregor, the former featherweight and lightweight Ultimate Fighting Champion, is in trouble with [ ... ]
ufc
The Craziest End To A UFC Fight Ever? Cody Garbrandt And Pedro...
Jon Jones stole most of the headlines at UFC 235 last night in Las Vegas but there is no doubt that [ ... ]
ufc
''Literally The Greatest Fighter Of All Time'' - Jon Jones Cruises...
Jon Jones retained his light-heavyweight championship at UFC 235 last night with a clear decision win [ ... ]
ufc
UFC 235 Preview And Fight Night Predictions: Jon Jones And Anthony...
The octagon returns home to the T-Mobile Arena in Las Vegas, with two titles up for grabs as Jon Jones [ ... ]
ufc
Bellator 217 Preview: James Gallagher Headlines Bellator’s Return...
Bellator continues its foray into European territory with a return to the 3Arena in Dublin, Ireland [ ... ]