It wasn’t just the main events that impressed the fans however. The UFC’s roster truly showed off it’s might on the night, as the prelims proved their worth to an eager crowd and featured six consecutive knockouts, started by new fan favourite Chris Barnett’s incredible wheel kick KO. That was followed by crowd-drawing Irishman Ian Garry’s fantastic step-back knockout blow, and the drama continued until we got into the main event.

The crowd were loud on the night, and they only got louder as former lightweight interim champion Justin Gaethje began his walk to the ring, where former Bellator champion Michael Chandler waited patiently for what would be another epic scrap to add to his resume.

The bout went the full three rounds, much to the surprise of everyone watching, although it felt like it yearned for another two rounds just to find a stoppage winner. After starting dominantly, Chandler failed to capitalise on his quick start and stunning attacks, as Gaethje found his reach and rhythm to begin his approach. On came a barrage of hefty blows to the head of Chandler, leaving him mangled and disfigured, even at one stage flat on the floor after a nasty uppercut. 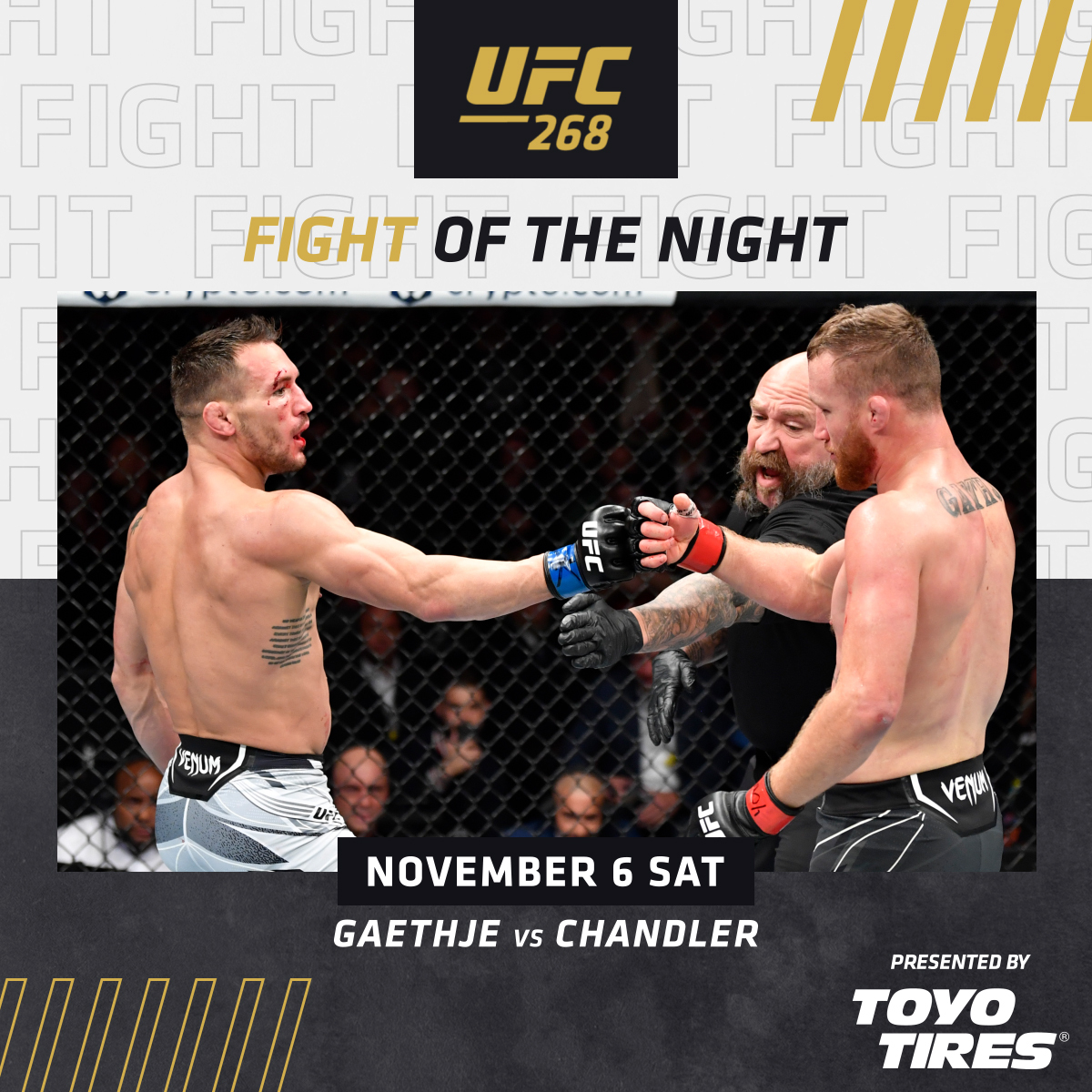 Gaethje’s endless gas tank seemed to serve him well into the final minutes of the fight, still landing at will and with ease against the 35-year-old, making it look easy. It was at this point when Chandler managed to repeat the early success he had in the fight, as he came back and a second wind powered him on to take the slugfest to its bitter end.

Gaethje spent the remaining minute and a bit dancing around the cage as Chandler walked him down, taunting him around the ring and throwing jabs to make sure he kept him at a distance he liked. The building roared with every step made and the end of the fight horn was drowned out by rapturous applause from the New York crowd that was lucky enough to witness such a fight.

The next two fights before the title matchups were Shane Burgos, looking to defend his featherweight ranking against Billy Quarantillo, another fight that went the distance and saw Burgos piece together some combinations and outclass his opponent to get the unanimous decision win. Frankie Edgar and Marlon Vera followed, in what seemed to be a fight with bad blood due to the Ecuadorian’s frequent gestures towards the former champion throughout the fight, that reached it’s KO conclusion as Vera landed a heavy front kick, reminiscent of fellow South American, Anderson Silva’s front kick KO of Vitor Belfort in the 2000s that shocked the UFC. Nowadays it’s a rare finish but a common kick to see and mightily impressive when you see it come off in this fashion. 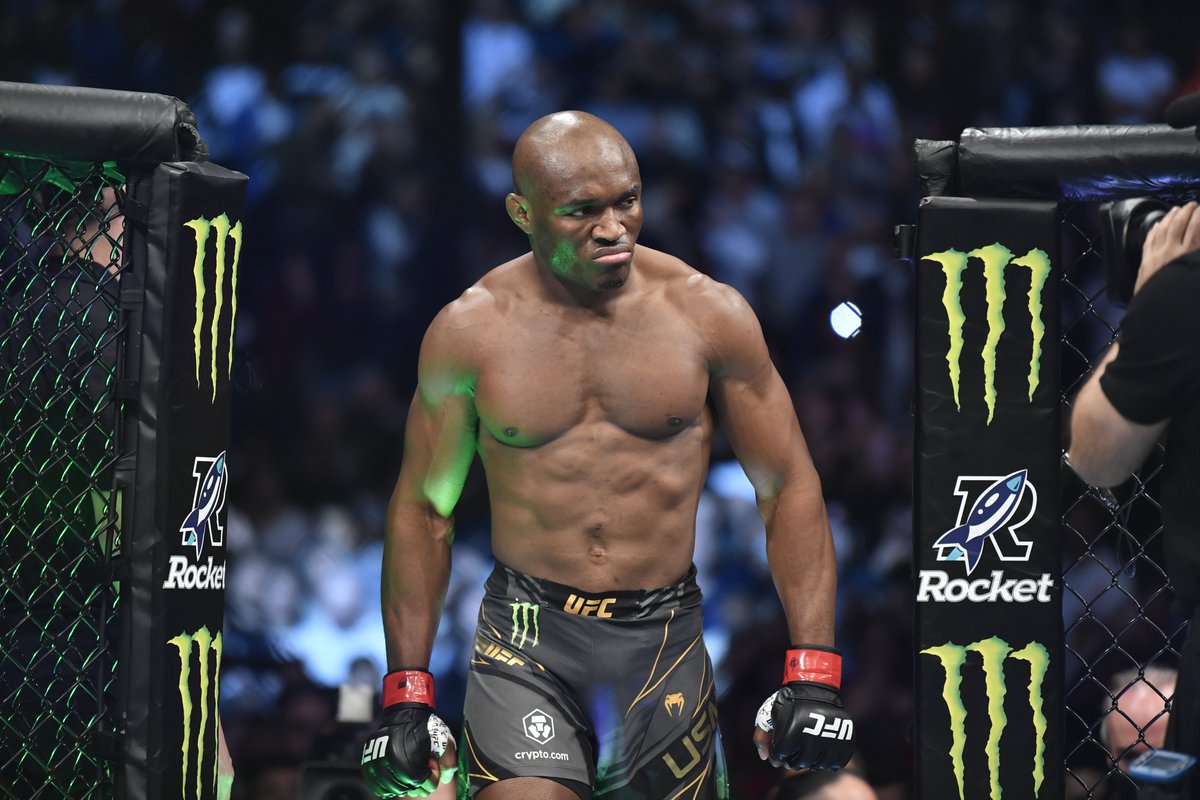 The two title fights didn’t see a changing of the guard, as Usman and Namajunas both got the job done on points in slightly underwhelming fashion in comparison to what preceded it. Usman finally got taken down for the first time in his career before keeping Colby Covington at bay, all until the final round where Covington looked for a finish on Usman but couldn’t get him any further past the point in mildly stunned. Namajunas dominated Weili on the ground and used the championship rounds smartly to stay on top of the Chinese fighter, staying just active enough to make sure that Mark Goddard didn’t stop the fight and Thug Rose was champion again.

Next up we have Max Holloway vs Yair Rodriguez, the former champion facing up against The Ultimate Fighter: Latin America winner. Deep into the card is the likes of Marc Diakiese, Thiago Moises and Miguel Baeza, as well as Felicia Spencer and Ben Rothwell making up some of the main card fights before everybody’s favourite Hawaiian returns to the cage, with the main event beginning at 9pm GMT.

x
Suggested Searches:
Manchester United
Liverpool
Manchester City
Marcus Rashford
Premier League
More
ufc
Revenge Or Repeat For Usman Vs Covington? UFC 268 Betting Preview
In a quite ironic twist of fate, the Oxford English Dictionary’s word of the day (at the time [ ... ]
ufc
Teixeira Wins As Brilliant UFC 267 Kicks Off A Fall Festival...
One of the UFC’s frequent stints outside of the States took place again last Saturday evening, [ ... ]
ufc
UFC 267: Everything You Need To Know About Blachowicz vs Teixeira...
UFC returns to pay-per-view this weekend with a card that boasts two championship fights, and a host [ ... ]
ufc
Three Main Events And A Soda: UFC To Finish 2021 With A Bang
It’s been quite the year for the Ultimate Fighting Championship. The return of fans in Jacksonville [ ... ]
ufc
Dern Return: The UFC Fight Night 194 Preview
The UFC Apex in Las Vegas, Nevada hosts a huge women’s strawweight clash on Saturday when Mackenzie [ ... ]
ufc
2020 Breakout Star Kevin Holland Has It All To Lose in 2021
2020 was a year most of humanity would like to forget. But while the rest of us were locked down in [ ... ]
ufc
Where? When? How To Watch? Everything You Need To Know About...
The UFC returns to pay-per-view this weekend with a stacked card. There are two world title fights, [ ... ]
ufc
UFC 266: Why Joshua vs Usyk Isn’t The Only Fight Worth Watching...
The UFC returns to pay-per-view on Saturday night with a stacked card emanating from the T-Mobile Arena [ ... ]
ufc
UFC Fight Night 192: Light Heavyweights Lead The Way In Nevada
The UFC returns this Saturday with Fight Night 192, two weeks removed from Liverpool’s Darren [ ... ]
ufc
For Whom The Bell Tills: What Next For ‘The Gorilla’?
Darren Till’s third-round submission loss to Derek Brunson on Saturday night has left the Liverpool [ ... ]
ufc
Viva Scouse Vegas: Liverpool’s MMA Royalty Descends On Nevada
The UFC Apex in Enterprise, Nevada is bracing itself for a British invasion on Saturday night, as the [ ... ]
ufc
Chikadze vs Barboza: Georgia’s Skilled Striker Faces Tough Test...
Giga Chikadze might’ve began his UFC career with a loss, but since his shortcoming on Dana White’s [ ... ]
ufc
UFC Fight Night Sees The British Take Over Las Vegas Led By...
The stage has been set for the UFC to return to the UK since Jorge Masvidal’s famous knockout [ ... ]
ufc
Usman vs Covington II Heading To UFC 268 As Leon Edwards Misses...
A busy week for the UFC began with the announcement of a Welterweight title defense and a highly-anticipated [ ... ]
ufc
What Next For Conor McGregor After UFC 264 Loss To Dustin Poirier?
Conor McGregor’s future has been left up in the air after he suffered his second defeat in six [ ... ]
ufc
Your Guide To UFC 264 As Conor McGregor And Dustin Poirier Clash...
The much-anticipated trilogy between Conor McGregor and Dustin Poirier goes down on Saturday, July 11 [ ... ]
ufc
Who Is Conor’s McGregor's UFC 264 Opponent Dustin Poirier?
Dustin Poirier will take on Conor McGregor inside the Octagon for a third time at UFC 264 this [ ... ]
ufc
From Notorious Knockouts To Ruthless Rivalries, McGregor's Best...
Conor McGregor, the UFC’s divisive poster boy, returns to the cage on Sunday morning at UFC 264 [ ... ]
ufc
From Biggie To Joe Frazier, Rating Conor McGregor's Most Notorious...
Conor McGregor makes his return to Octagon on Saturday night when he takes on Dustin Poirier for a third [ ... ]
ufc
UFC 264: Everything You Need To Know Ahead Of Conor McGregor...
Conor McGregor and Dustin Poirier will be going at it for a third time this weekend, headlining a stacked [ ... ]
ufc
Your Guide To UFC 263, As Israel Adesanya Takes On Marvin Vettori
UFC 263 rolls into Arizona this weekend, with the small matter of a rematch between Israel Adesanya [ ... ]
ufc
Charles Oliveira Could Fight Conor McGregor In Brazil After...
Brazilian superstar Charles Oliveira could take on Conor McGregor in his homeland after he pulled off [ ... ]
ufc
UFC 262 Preview: A New Heir To The Lightweight Throne Will Be...
It’s been more than three years since we have seen anyone other than Khabib Nurgmagomedov wear [ ... ]
ufc
UFC 261: Jorge Masvidal Suffers First Knock Out As Kamaru Usman...
If the build-up to UFC 261 was hyped up, the night itself exceeded all expectations. In a stunning main [ ... ]
ufc
Kamaru Usman Hints He Could Walk Away After UFC 261 Clash With...
UFC welterweight champion Kamaru Usman has suggested he could walk away from the Octagon after his main [ ... ]
ufc
UFC 261: All You Need To Know Ahead Of A Blockbuster Night In...
Fight fans are in for a real treat in the Octagon this weekend with UFC 261 serving up a blockbuster [ ... ]
ufc
Conor McGregor Cancels Dustin Poirier Trilogy Due To Dispute...
Conor McGregor has insisted his trilogy fight with Dustin Poirier is off after the pair were involved [ ... ]
ufc
New Lightweight Champion To Be Crowned At UFC 262 After Khabib...
It is looking increasingly likely that a new lightweight champion will be crowned at UFC 262 with Michael [ ... ]
ufc
UFC Set To Return In Front Of A Full Crowd With A Stacked Card...
After more than a year of coronavirus-induced capacity restrictions, the UFC is set to finally return [ ... ]
ufc
Four Champions And Three Undisputed Titles On The Line At UFC...
UFC 259 features four champions, as middleweight king Israel Adesanya moves up to 205lbs to battle the [ ... ]