Jake Paul moved to 5-0 (4) with a sensational sixth round stoppage of Tyron Woodley on Saturday night. Despite that incredible knockout, which is still doing the rounds on social media, it was, in truth, a pretty woeful fight for the most part and it seemed the second meeting between these two lacked much of the buzz previous Jake Paul fights have carried.

The YouTuber’s next bout needs to generate many more thrills and spills then if the Jake Paul hype train is to keep on chugging along into the new year. Below, we’ve taken a look at the potential opponents on the horizon for Paul.

Both UFC stars were in attendance for the event in Florida on Saturday night although they departed long before Paul’s highlight reel stoppage of fellow MMA fighter Woodley. They did however still find themselves targeted by the precocious YouTuber in the immediate aftermath of his stunning victory.

“Masvidal and Nate Diaz, y’all are some bitches for leaving this arena, because I know you don’t want that sh*t. I’ll take out both of y’all next. Just get out of your contract with Daddy Dana, and I’ll fuck them up, too!” 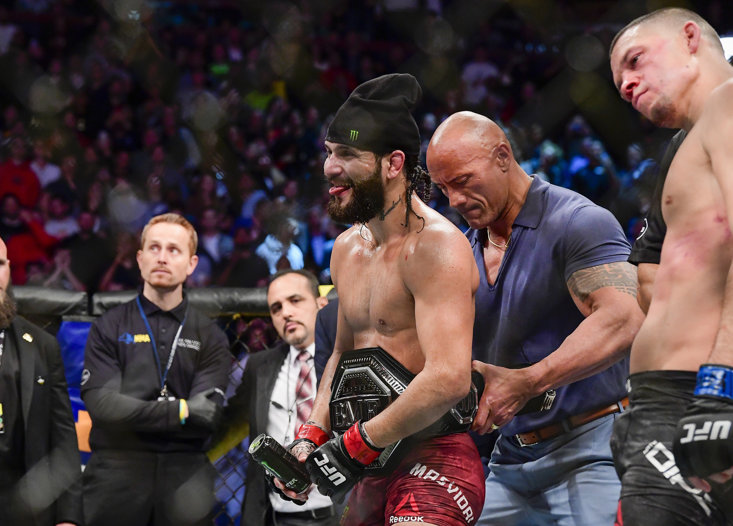 As entertaining as the build up to either of these fights would be, UFC head honcho Dana White is unlikely to allow either man out of their contracts with the organisation. Given the success of other stars from the Octagon against Paul, like Woodley and Ben Askren, it also seems far too big a risk for the promoter to allow them to stay under contract but still clash with Paul on a one-fight deal.

Tommy Fury had been a mere week away from fighting in the opposite corner to Paul at the weekend, but the British light heavyweight boxer was forced to pull out through injury with Woodley stepping in in his place. This fight definitely makes the most sense of all the options out there for ‘The Problem Child’.

The pair are mired in a genuine animosity for one another, with the build-up to the originally scheduled fight littered with vicious and personal barbs. It also helps that the Love Island star is also a genuine pugilist, something that has gone amiss in Paul’s five fights thus far and must be addressed immediately. Paul insisted that Fury wouldn’t get a second shot at him after dropping out but we think there’s a mighty good chance we’ll see these two duke it out in 2022. If not, we’re sure big John Fury would be chomping at the bit for a scrap with the YouTuber  - it's probably a better fight on paper, too.

Even in the bonkers landscape that boxing finds itself in right now, where UFC legends, elderly former champions and social media stars go head-to-head on an almost monthly basis, you’d struggle to envision pound-for-pound superstar Saul ‘Canelo’ Alvarez entertaining the idea of a fight with Paul. 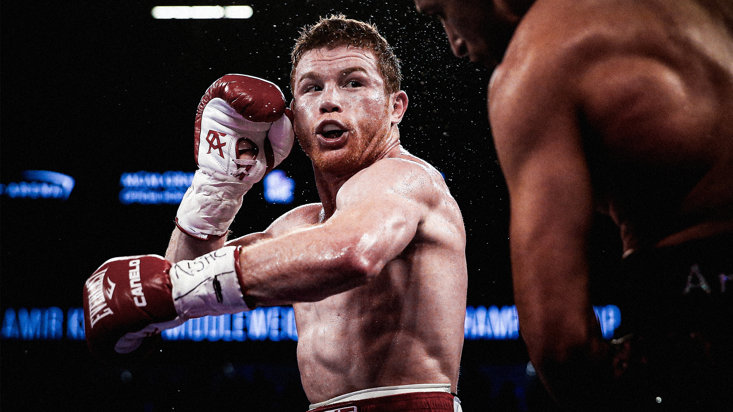 Before the Woodley rematch, Paul told Showtime, “I will fight Canelo 100 per cent.

“Look at this guy Avni Yildirim. His nickname was ‘The Turkish Warrior’. He sat down in the corner and quit. He didn’t throw a punch.

“Why can he get the fight but I can’t? I’m bigger than that guy. I’m stronger.”

With the Mexican superstar moving up to cruiserweight, size difference won’t actually be an issue between the two but the fact Canelo is currently chasing immortality within the sweet science and Paul is still looking for an opponent who can actually box, we’ll file this one under “Never Going To Happen” for now.

Conor McGregor is a name who has often been mooted alongside Paul’s and the pre-fight build-up and numbers generated would no doubt be extraordinary if it were to happen. Like Diaz and Masvidal though, ‘Notorious’ is contracted with the UFC so there could be some red tape.

Former UFC champion Vitor Belfort, who beat up a geriatric Evander Holyfield earlier this year, called out Paul in the aftermath of his win over ‘The Real Deal’ offering a $30m ‘winner takes all fight” on Triller.

Meanwhile, his own brother could be on the cards. When asked about fighting Logan Paul, another YouTuber turned boxer, he replied, "It's talked about so much. Who knows if it will happen. It's on the cards.

"The weird part is what we would actually do in the moment."

x
Suggested Searches:
Manchester United
Liverpool
Manchester City
Marcus Rashford
Premier League
More
boxing
The Baddest Men On The Planet: Francis Ngannou And Ciryl Gane...
UFC Heavyweight Champion Francis Ngannou will clash with Interim Champion Ciryl Gane this Saturday in [ ... ]
boxing
When Roberto Duran Proved He Was Boxing's Greatest Ever Lightweight
Weeks away from immortalising himself as the greatest lightweight to ever step foot inside the [ ... ]
boxing
Rematch Of 2019’s Fight Of The Year Inbound? Five Boxing Stories...
We could be getting a sequel to 2019’s Fight of the Year, Francis Ngannou is eyeing up Tyson Fury [ ... ]
boxing
Everything You Need To Know About Gary Russell Jr Vs Mark Magsayo
WBC featherweight champion Gary Russell Jr will fight for the first time in two years on Saturday, as [ ... ]
boxing
On This Day: Roy Jones Jr Turns On The Old Magic Against Felix...
Boxers don’t always face off when we want them to. Unlike other sports, where league systems or [ ... ]
boxing
As He Faced The Son He Cast No Shadow: Chris Eubank Jr. Must...
Chris Eubank Jr. takes on Liam Williams in the year’s first big domestic dust-up next month at [ ... ]
boxing
''I Shook Up The World!'': The Moment Cassius Clay Truly Became...
On what would have been his 80th birthday, it is only appropriate to pay tribute to the cultural icon [ ... ]
boxing
Terence Crawford Sues Top Rank, Five Boxing Stories You Might...
It’s been another busy week in the world of boxing which has seen lawsuits, new signings and some [ ... ]
boxing
Heavyweight Frazer Clarke To Make Professional Debut On Khan...
Frazer Clarke will make his professional, Sky Sports and Boxxer debut on the undercard to the highly-anticipated [ ... ]
boxing
War Of The Worlds: When Boxers And MMA Fighters Collide
Boxing and UFC’s world heavyweight champions have been exchanging fighting talk on social media [ ... ]
boxing
Brand New Heavies: There's Big Men Beyond Fury, AJ, Usyk and...
The heavyweight division is as stacked as its been at any point since the 1990s. In Tyson Fury and Oleksandr [ ... ]
boxing
World Titles And Returning Kings: 2022 Could Be A Year Of Welter...
The first big welterweight clash of the year is close to being confirmed, as WBC and IBF champion Errol [ ... ]
boxing
On The Regular: The Ridiculous History Of The WBA Regular Heavyweight...
If you’re a long-time boxing fan, you’d be forgiven for thinking the abbreviation WBA stands [ ... ]
boxing
Lawrence Okolie To Move To Heavyweight? Five Boxing Stories...
It’s been a busy first week of 2022 in the world of boxing with Lawrence Okolie looking to mount [ ... ]
boxing
Undisputed Showdown With Fury Would Be Historic Night For Boxing,...
Unified heavyweight champion Oleksandr Usyk could face Tyson Fury in a unification clash instead of [ ... ]
boxing
The Sportsman Boxing Power Rankings: January
The Sportsman Boxing Power Rankings is a monthly series ranking boxers on a number of factors to determine [ ... ]
boxing
Floyd Mayweather Lines Up Exhibition With YouTuber Money Kicks
50-0 boxing icon Floyd ‘Money’ Mayweather is set to return to the ring once again in 2022. [ ... ]
boxing
Ortiz vs Martin Can Prove Boxing Doesn't Have To Be Elite To...
Exciting sport is not solely predicated on the elite meeting the elite. While clashes of the world’s [ ... ]
boxing
Boxing's Biggest And Best Knockouts Of 2021: Featuring Fury,...
It’s been a busy half-year of boxing for me, finally getting back out on the road after the various [ ... ]
boxing
Andy Ruiz Jr Next For Tyson Fury? Five Boxing Stories You Might...
The fights may have slowed down to give everyone a Christmas break, but boxing’s powerbrokers [ ... ]
boxing
The Kings & Queens Of Promise: The Boxers To Watch In 2022
2022 already promises so much on the boxing front. Saul ‘Canelo’ Alvarez is set to move [ ... ]
boxing
Five Fights We Want In 2022: Will We Finally See Fury Vs AJ...
What a year it’s been inside the squared circle in 2021. We saw Saul ‘Canelo’ Alvarez [ ... ]
boxing
Where Are They Now? The 2005 ABA National Championship Winners
The roll call of the 2005 ABA National Championship is utterly stacked with talent. The 119th iteration [ ... ]
boxing
Her Ring Too: Women’s Boxing Set For Bumper 2022 After Thriving...
2021 was a banner year for women’s boxing. We saw thrills and spills, upsets and dominations. [ ... ]
boxing
Make Boxing Day 'Boxing' Again: The Fights To Watch This 26th...
Your internal organs are 60% turkey, your Nan made you watch the Queen’s speech and you had to [ ... ]
boxing
Move Over Die Hard, Rocky IV Is The Ultimate Underrated Festive...
“Is Die Hard a Christmas film?” It’s a debate that has raged and swirled around this [ ... ]
boxing
Jake Paul Vs Former Middleweight Champ? Five Boxing Stories...
Errol Spence will find himself in an early unification fight next year, Triad Combat is somehow returning [ ... ]
boxing
The Sportsman Boxer Of The Year - Saul 'Canelo' Alvarez
It’s been quite a year in the squared circle. Trilogies have reached their brutal conclusion, [ ... ]
boxing
The Sportsman Boxer Of The Year - Number 2: Oleksandr Usyk
It’s been quite a year in the squared circle. Trilogies have reached their brutal conclusion, [ ... ]
boxing
The Sportsman Boxer Of The Year - Number 3: Tyson Fury
It’s been quite a year in the squared circle. Trilogies have reached their brutal conclusion, [ ... ]