The octagon sat proudly inside the Nassau Veterans Memorial Coliseum in New York for the first time in promotional history, with a fair share of New Yorkers on the card which lay in the midst of UFC 214.

Chris Weidman was victorious in the main event, defeating Kelvin Gastelum by submission in the third round, whilst Darren Elkins outpointed Dennis Bermudez to make it five consecutive wins in the featherweight division.

Over eleven thousand people filled the arena, generating a live gate just shy of $1.1 million. What else did we learn?

Jimmie Rivera is in the mix at 135lbs

After picking this out as one of the fights to watch, Jimmie Rivera and Thomas Almeida obliged and competed in a great bantamweight brawl. Both men had only lost once before tonight, with Rivera’s coming nineteen fights ago and Almeida’s to current champion Cody Garbrandt.

Rivera knocked Almeida down twice inside the first round, possibly earning him a 10-8 round in the eyes of the judges, before Almeida returned the favour by startling Rivera in the second.

FOX Sports: UFC
@UFCONFOX
One to the body. One to the head. Jimmie Rivera strikes quick, but great recovery by Thomas Almeida. #UFCLongIsland
40
108

Rivera edged the third round with a couple of takedowns leaving the judges unanimously awarding the fight to the American. Rivera has now won twenty consecutive bouts and surely fights a big name in the bantamweight division next. Dominick Cruz is the first to come to my mind.

There was a number of beautiful knockouts on display from New York, with three perfectly timed strikes on show.

First up was debutant Junior Albini, making his octagon debut in the heavyweight division and wasting no time in dispatching Timothy Johnson with a stunning combination, earning him a $50,000 bonus for performance of the night.

The All-American is back!

The former UFC middleweight champion Chris Weidman, was on a path of destruction just two years ago, defeating the great Anderson Silva twice, before defeating two other Brazilians in Vitor Belfort and Lyoto Machida. There was talk of him having the skills to become the best middleweight of all time.

Until one night at UFC 194, when the All-American lost his middleweight crown to Luke Rockhold. Eleven months out followed before returning to fight at Madison Square Garden, a dream for any New Yorker, but Yoel Romero stole the show with a stunning flying knee in the third round.

Then a controversial defeat to Gegard Mousasi followed, with Weidman staring down the barrel of a four-fight losing streak. The American made sure it wasn’t happening by outwrestling Kelvin Gastelum before submitting him in the third round.

He didn’t have it all his own way however, with Gastelum knocking Weidman down at the end of the first round and coming close to finishing the fight. Weidman did well to recover in between rounds and came back to dominate the second round, landing three takedowns and only allowing three strikes to be thrown by Gastelum. 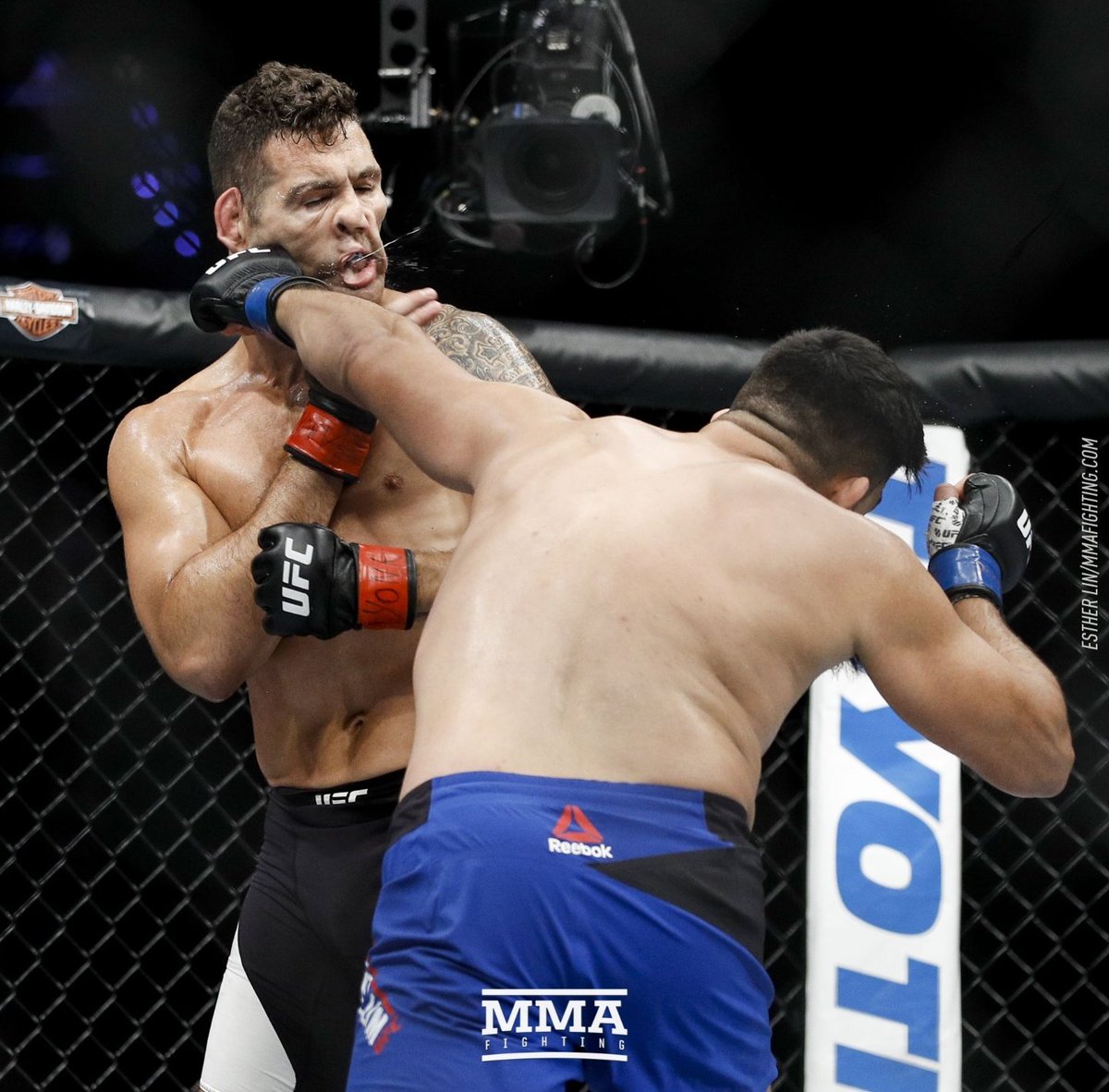 The third round made it seven takedowns in the fight for Weidman, with Gastelum struggling to defend against one of the best wrestlers in the UFC. When the opportunity presented itself to find the submission, Weidman took it after previously failing to secure a kimura in the first round.

The two time NCAA Division I All-American made sure he wasn’t letting the arm triangle choke go, and after a strong effort by Kelvin Gastelum, he was forced to give in and hand Weidman the victory.

FOX Sports: UFC
@UFCONFOX
Chris Weidman IS BACK! A big submission victory over a game Kelvin Gastelum in round three! #UFCLongIsland
1011
1616

Chris Weidman is back and will be targeting a fight against the elite middleweights in the octagon!

More
mma
The UFC Needs Paige VanZant's Instagram Followers More Than...
It was over almost before it began. Eighteen months of waiting culminated in a dominant Amanda Ribas [ ... ]
mma
Sanitised Violence: When Cage Warriors Went Behind Closed Doors
Just before UK lockdown began, top European MMA promotion Cage Warriors took place in a hauntingly deserted [ ... ]
mma
''Best Shape I've Ever Seen Him'' - Conor McGregor Bringing...
The wait is almost over as Conor McGregor makes the final preparations for his return to the Octagon [ ... ]
mma
From The Greatest To The Fiercest, UFC 245 Promises A Night...
Let’s take stock for a second. 2019 has delivered some blistering moments. Who can forget Jorge [ ... ]
mma
Hungry And Focused, It's The New Improved Conor McGregor
Conor McGregor’s striking coach, Owen Roddy, insists his fighter “has that hunger again” [ ... ]
mma
''Focused'' Conor McGregor Announces His Octagon Return In 2020
Conor McGregor has come out of MMA retirement and announced his return to UFC at the start of next year. [ ... ]
mma
From Flanker To Fighter: James Haskell Talks To TheSportsman...
Former England rugby star James Haskell announced last week that he'll be swapping his scrum cap [ ... ]
mma
His Three Most Notorious Moments Inside The Octagon As Conor...
The former UFC featherweight and lightweight champion Conor McGregor has announced his retirement [ ... ]
mma
Tenshin Nasukawa Unleashes Amazing Capoeira Kick To Bounce Back...
The defeat to Floyd Mayweather in a farcical exhibition big-money boxing match on the last New [ ... ]
mma
#Bellator216: Michael Page Outpoints Paul Daley In Disappointing...
Michael ‘Venom’ Page outpointed long standing rival Paul Daley at the Mohegan Sun Arena [ ... ]
mma
#Bellator216: MVP And Daley Set For All-British Brawl In Connecticut
The biggest domestic UK MMA fight of all time goes down this Saturday evening… in Connecticut, [ ... ]
mma
Aaron Chalmers Suffers Shock Defeat In Hometown Bellator Newcastle
Bellator kicked off their European Series in Newcastle with a bang, with an incredible twelve finishes [ ... ]
mma
Aaron Chalmers Aims To Please As Bellator Heads To Newcastle
Aaron Chalmers bids to move to a perfect 5-0 record as a mixed martial artist in his hometown, as he [ ... ]
mma
Conor McGregor 'Clone' - German MMA Fighter Emulates His Hero...
If you are going to model yourself on UFC Legend Conor McGregor then you better be able to deliver the [ ... ]
mma
Conor Mcgregor And Khabib Nurmagomedov Slapped With Hefty Bans...
Conor Mcgregor And Khabib Nurmagomedov have both been banned for their parts in the mass brawl that [ ... ]
mma
Tenshin Nasukawa Responds To Conor McGregor Calling Him Out
The Japanese martial artist Tenshin Nasukawa has seemingly not allowed his confidence to be knocked [ ... ]
mma
Celtic Gladiator 22: Brendan Loughnane And Kane Mousah Headline...
European mixed martial arts show Celtic Gladiator return to Manchester on Friday night for the second [ ... ]
mma
Horrendous Scenes As MMA Fighter Dislocates His Knee Whilst...
Not what you want to see on a Sunday morning but here we go anyway. As we know, MMA is probably the [ ... ]
mma
Yair Rodriguez Stuns Chan Sung Jung With Last Second Knockout...
Yair Rodriguez produced a sickening elbow to the face of Chan Sung Jung in the last second of their [ ... ]
mma
Conor McGregor Inspires Dallas Cowboys To Victory And Claims...
Conor McGregor bounced back from his defeat to Khabib Nurmagomedov by watching the Dallas Cowboys beat [ ... ]
mma
Conor McGregor's Top 5 Knockouts
The return of Conor McGregor to the octagon after an extended… sabbatical will redraw the collective [ ... ]
mma
Korean Taekwondo Team Dazzle Audience With Action Packed Display
It’s over ladies and gentleman. If you’re thinking about taking up Taekwondo, or looking [ ... ]
mma
Ultimate Fighter 27 Finale Is Perfect Prelude To UFC 226!
The Ultimate Fighter Season 27 draws to a close as the perfect warm-up act for the hotly anticipated [ ... ]
mma
Aaron Chalmers' First Bellator Bout Sees The Ex-Geordie Shore...
On Friday night, MMA fighter Aaron Chalmers sensationally won his bout with Ash Griffiths by technical [ ... ]
mma
UFC Atlantic City: Kevin Lee Misses Weight, Main Event Still...
The octagon returns to Atlantic City, New Jersey for the first time in nearly four years with the promotion [ ... ]
mma
Jacare Meets Brunson In Main Event At UFC Charlotte
The octagon returns to Charlotte, North Carolina after almost an eight-year hiatus with a twelve-bout [ ... ]
mma
Behind the Medals: Bianca Walkden's Year To Remember
A two-time world champion, an Olympic bronze medallist, a record-breaking Taekwondo practitioner and [ ... ]
mma
Chalmers, Scope And Edwards Win Big At BAMMA 33!
Aaron Chalmers continued his perfect start to his mixed martial arts career in Newcastle last night [ ... ]
mma
Geordie Shore Star Aaron Chalmers Scores Stunning Knockout Win...
Reality TV stars are often questioned on whether or not they have any discernible talent but it seems [ ... ]
mma
Aaron Chalmers looks to make it a perfect three in homecoming
The Metro Radio Arena in Newcastle plays host to a co-promoted night of mixed martial arts, with American [ ... ]
This website uses cookies
Cookies help us and our partners provide statistics. By browsing this website, you consent to the use of cookies in accordance with our Privacy Policy and Cookies Policy.
Accept & Close