Among the YouTubers and gross mismatches on show in Cleveland, Ohio on the Jake Paul vs Tyron Woodley card, fans were able to see at least one genuine boxing superstar in action on Sunday night.

Amanda Serrano outclassed Yamileth Mercado to defend her WBC and WBO featherweight titles by unanimous decision to further her claim as the pound-for-pound number one queen, less than a week before another contender to the throne, Katie Taylor, takes to the ring.

The Puerto Rican superstar put in a dominant performance against the tough Mexican who, while outboxed, fought admirably, especially against one of female boxing’s most destructive punchers (30 of Serrano’s 41 wins have come inside the distance).

The win means that the 32-year-old, the only female to win world titles in more than four weight classes (seven), is on a ridiculous 27-fight win streak and has not lost for the best part of a decade.

Despite a strong claim to pound-for-pound supremacy in women’s boxing, ‘The Real Deal’ remained humble in her post-fight interview acknowledging there are other fighters who are just as worthy.

“I don’t want to say that I’m No.1 pound-for-pound, because there are great female fighters like Claressa Shields. As long as I’m at the top with fighters like her, then I’m good.” 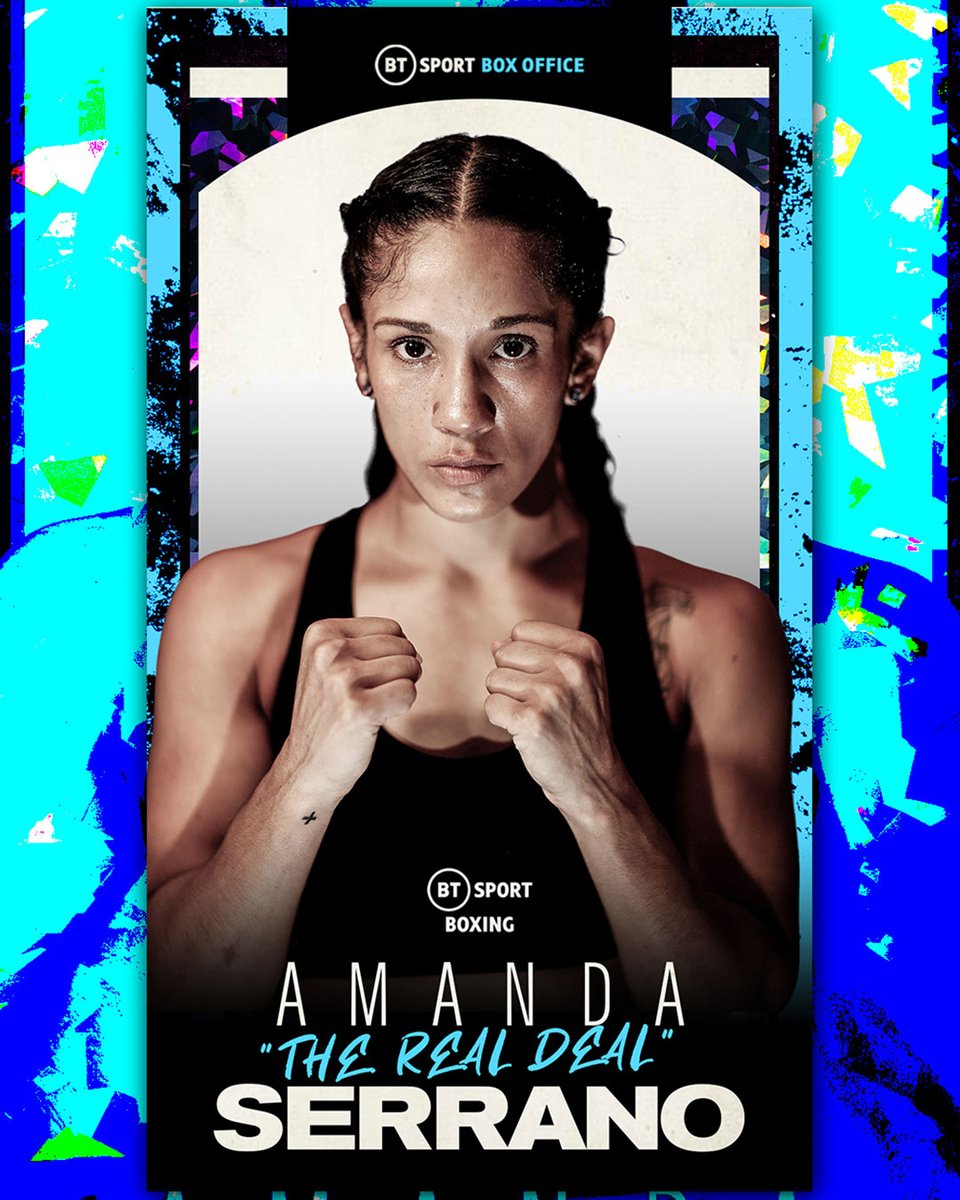 Another such fighter is the aforementioned undisputed lightweight champion Taylor. A showdown between Serrano and ‘the Bray Bomber’, which has been mooted for some time now, seems inevitable. Serrano, however, says she has some unfinished business at 126lbs before she can move up to duke it out with Taylor.

“I want that fight with Katie Taylor in the future,” Serrano said. “First I want to fight the other featherweight champions (WBA champ Erika Cruz Hernandez and IBF strap-holder Sarah Mahfoud) and become undisputed in my weight class. Then we’ll have two undisputed champions against each other when Katie and I fight.”

Undisputed vs undisputed certainly has a nice ring to it, and should these two meet, which would likely be 2022, it would almost certainly go down as the biggest bout in women’s boxing history.

That potentially groundbreaking match-up will be the furthest thing from Taylor’s mind this week though, as she prepares for her outing on the undercard of Josh Warrington’s rematch with Mauricio Lara in Leeds on Saturday night - any slip ups and that mega-fight with Serrano could vanish.

Taylor puts all her belts on the line against six-time national amateur champion and former IBF featherweight world champion Jennifer Han, who heads into the clash on the back of an eight-fight winning streak.

“I think the last 12 months have been fantastic for me personally. I’m still sitting here as the undisputed champion, 18-0 with some fantastic performances and some amazing fights under my belt,” said Taylor. 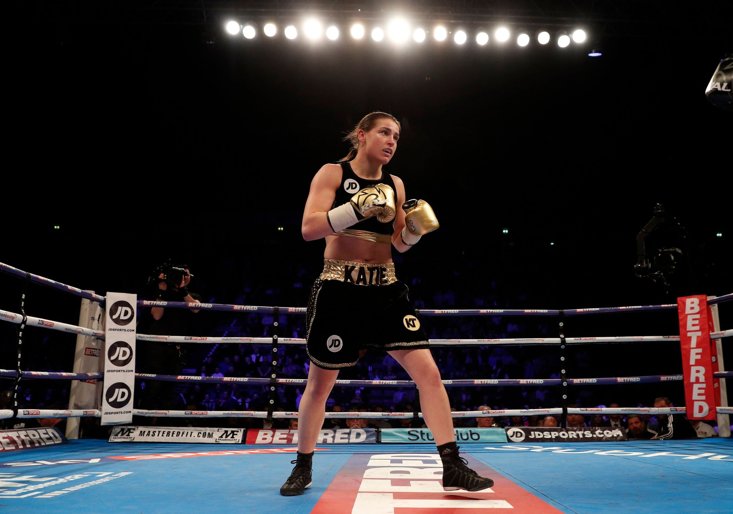 “The fights I’ve been in have elevated women’s boxing to another level. This is the pinnacle of professional boxing – holding all of the belts, that’s what everyone in professional boxing wants to do. Everyone’s dream is to become the undisputed champion.

“I’m going to try my best to hold on to every one of those belts for as long as I can. This is what I’m in the sport for. I want to make history, I want to be a world champion and I want to hold all of the belts - I’m all in.”

“The women are definitely more inclined to take a few more risks and actually go in and take the bigger fights. I love that about the female fighters. We actually want the big fights. We’re willing and able to actually step in the ring and fight all of these other champions.”

Both Taylor and Serrano, alongside the likes of Shields and Savannah Marshall, are all doing their bit to take the women’s game to new heights and the fact that two potentially undisputed champions could meet in the ring in the near future is tantalising. Maybe the men should take note.

x
Suggested Searches:
Manchester United
Liverpool
Manchester City
Marcus Rashford
Premier League
More
boxing
Oleksandr Usyk Puts In Boxing Clinic Against AJ To Take Heavyweight...
You’d be forgiven if you’re starting to grow a little weary of hearing ‘Sweet Caroline’ [ ... ]
boxing
Okolie Cruises To Victory In First World Title Defence On AJ...
The first defence of Lawrence Okolie’s WBO cruiserweight crown ended swiftly on the undercard [ ... ]
boxing
The Rebuild Begins For Callum Smith As He Steps Up To Light...
Callum Smith was the best super middleweight in the world. The Liverpool fighter was the latest outstanding [ ... ]
boxing
Anthony Joshua Weighs In 19lbs Heavier Than Usyk Ahead Of Heavyweight...
Anthony Joshua has weighed in at 240lbs ahead of his heavyweight showdown with Oleksandr Usyk this weekend, [ ... ]
boxing
Okolie Is The Latest In A Proud Line Of British Cruiserweight...
Anthony Joshua will not be the only British world champion stepping into the ring at the Tottenham Hotspur [ ... ]
boxing
Anthony Joshua vs Oleksandr Usyk Is Fight Of The Year, Says...
Ahead of Oleksandr Usyk’s heavyweight showdown with Anthony Joshua at the Tottenham Hotspur Stadium, [ ... ]
boxing
From Mike Tyson To Mr. Dream, How Punch-Out!! Defined Boxing...
Only 55 men truly know what it is like to face ‘Iron’ Mike Tyson. But a generation of gamers [ ... ]
boxing
Anthony Joshua Treating Oleksandr Usyk Fight Like Just Another...
Anyone expecting fireworks akin to Canelo and Caleb Plant’s presser might have been left disappointed [ ... ]
boxing
Six Of The Best: Famous Boxing Father And Son Duos
Campbell Hatton faces Sonni Martinez this weekend in his fourth professional fight. While the Manchester [ ... ]
boxing
A Usyk Win Could Derail AJ-Fury, But Bring Us An Undisputed...
When the dust settles and Anthony Joshua vs Oleksandr Usyk is in the record books, fans and media alike [ ... ]
boxing
Eubank And Watson Made History That Should Never Be Repeated
Every boxing match is a roll of the dice. Fans demand ferocity and violence. They roll the dice and [ ... ]
boxing
Next Best Thing: Why Usyk Is The Best Opponent AJ Could Have...
Anthony Joshua steps into the ring with Oleksandr Usyk on Saturday, defending his WBA, WBO and IBF world [ ... ]
boxing
Start Time? Undercard? How To Watch? Everything You Need to...
Anthony Joshua’s IBF, WBA and WBO belts will all be on the line this weekend when he takes on [ ... ]
boxing
Dillian Whyte To Fight Otto Wallin, Five Boxing Stories You...
Dillian Whyte could face a tough heavyweight test in October, Jake Paul is helping to make a women’s [ ... ]
boxing
Bridge Over The River Why?: WBC Confirms First Bridgerweight...
Boxing has a new world championship in a brand new weight class, as Oscar Rivas and Bryant Jennings [ ... ]
boxing
Crawford vs Porter: Top Welter Scrap Can Cure Boxing Of Its...
WBO welterweight champion Terence Crawford will meet former two-time belt-holder Shawn Porter on 20th [ ... ]
boxing
Tales From The Crypto: Amir Khan Fronts Bizarre Finance Influencer...
You have seen your favourite YouTubers knock out basketball players. You have seen MMA fighters destroy [ ... ]
boxing
Atrocity Exhibition: Boxing Must Stop Encouraging Fighters Like...
Evander Holyfield is no stranger to unedifying ends to a career. ‘The Real Deal’ has reached [ ... ]
boxing
Tyson Fury Shares Career Bucket List, Five Boxing Stories You...
Tyson Fury has mapped out his ideal boxing bucket list, Donald Trump is back and Billy Joe Saunders [ ... ]
boxing
Anthony Joshua's Ferocious Punching Power The Key Against Usyk,...
There’s a little over a fortnight to go until the showdown between WBA, IBF, WBO, and IBO heavyweight [ ... ]
boxing
First Line Of Defence: When The Best Brits Put Their Belts On...
Sunny Edwards was set to defend his IBF Flyweight championship against Jayson Mama on Saturday at the [ ... ]
boxing
When They Were Kings: Triller’s Old Guard Have Seen Better Days
Propped up by a mixture of celebrities, retired fighters, influencers and the odd rising boxer, Triller [ ... ]
boxing
When Wladimir Klitschko And ‘The Next Tyson’ Saved The Heavyweight...
Former WBC heavyweight champion ‘The Nigerian Nightmare’ Samuel Peter turns 41 today. Despite [ ... ]
boxing
Oscar Valdez Fighting After Positive Drugs Test Casts Boxing...
WBC super featherweight champion Oscar Valdez has tested positive for the banned substance phentermine [ ... ]
boxing
Lara Slice Puts Warrington Redemption On Ice
Josh Warrington stormed into Headingley to the strains of ‘I Predict A Riot’, but not even [ ... ]
boxing
Triumphant Taylor And Heroic Hughes Highlight Warrington vs...
There is no question that Josh Warrington drew the large and vocal crowd to Headingley, to watch him [ ... ]
boxing
Influencers Need Not Apply: Fury, Joshua and Canelo Lead Boxing’s...
Last weekend, Jake Paul “treated” us to the latest chapter in his boxing odyssey. Next Saturday, [ ... ]
boxing
Josh Warrington Admits Pressure Is On As He Seeks Revenge Against...
Josh Warrington is gearing up for a shot at revenge on Saturday night when he takes on Mauricio Lara [ ... ]
boxing
A Night At The Circus: Paul Squeaks Past Woodley As Tommy Fury...
Jake Paul moved to 4-0 (3 KOs) last night with a split decision victory over former UFC champion Tyron [ ... ]
boxing
Angelo Dundee: Three Masterpieces From Boxing’s Greatest Trainer
Perhaps the greatest cornerman of all-time, Angelo Dundee guided the careers of sixteen world champions [ ... ]