Golf
News
The American has won his second major after a nerveless display
Simon Lillicrap
19:02, 18 Jul 2021

Last year’s PGA Championship winner showed incredible nerve to hold off Dustin Johnson and Paul Casey in August, and he showed the same qualities here, landing three birdies in a row to put himself in contention on the front nine before putting his way to victory on the back nine. For a man of just 24, he has repeatedly shown he has both the bottle and the talent to win these big tournaments, and although the early comparisons to a certain Tiger Woods may be a little premature, he looks likely to have a big impact on the sport over the next decade.

It was a day of disappointment for Oosthuizen, who came into the day with a one-shot lead but had his worst round of the competition as he fell away. Hole seven will haunt him for the rest of his life as he landed in the bunker when approaching the green, and then as he tried to escape bunker one his chip landed in bunker two. He managed a bogey, but from then on it was almost certain his 11-year wait for a major would continue.

Spieth produced four birdies in six holes late on and it did seem at one point as if he was destined to win this competition for the second time, but when it really mattered he was unable to land key putts, whereas Morikawa kept sinking them. Spieth finished on 13-under with a final-round score of 66, one of the best of the afternoon, but will look back with disappointment on his Saturday performance in which he missed two good opportunities for birdies.

After a poor first nine, pre-tournament favourite Jon Rahm sunk four birdies in a row on the back nine to launch himself up the field to finish level with Oosthuizen on 11-under. The Spaniard can produce the golf he showed on the back nine, but his round-one score of one-over potentially cost him victory here. 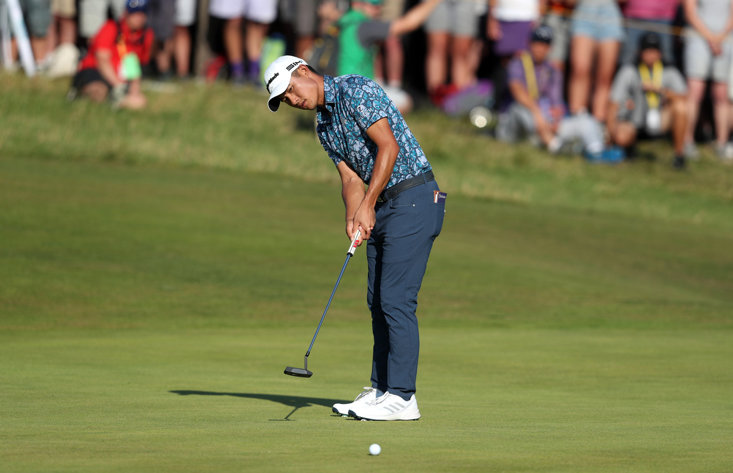 The contenders came close, but ultimately Morikawa was unflappable throughout, despite the pressure Spieth in particular applied. As he approached the 18th green, the engraver had already begun work on the trophy as the American took a two-shot lead into the final hole.

Having finished T8 at the PGA Championship and T4 at the US Open already this year, this win was not unexpected but instead the continuation of an improving golfer who could go on to dominate the sport. Tiger Woods won his first British Open back in 2000, going on to win three in total, and there is no reason to suggest that Morikawa cannot equal that total, with time on his side.

Despite four days of brilliant golf from the American, which saw some excellent approach play and nerveless putting, it was perhaps his persona that will put him on the right track for future success. He was so calm when it came to the crunch, and his shots were a reflection of his personality.

A total of 33,000 British fans gathered to watch this remarkable young man make par on the final hole, and in doing so he won his very first Claret Jug, and the second major in his career. With this consistent level of performance, that total of two will not remain the same for very long.

x
Suggested Searches:
Manchester United
Liverpool
Manchester City
Marcus Rashford
Premier League
More
golf
Golf's Sibling Superstars Minjee Lee And Min Woo Lee Are Taking...
On Sunday, Australian golfer Minjee Lee overturned a seven shot deficit to beat South Korea’s [ ... ]
golf
Oosthuizen Holds His Nerve To Take One-Stroke Lead Into Final...
Louis Oosthuizen proved once again that he should never be underestimated, as even with a subpar performance [ ... ]
golf
Louis Oosthuizen Makes Open Championship History As He Tightens...
Louis Oosthuizen tightened his grip on the Open Championship with another phenomenal round that saw [ ... ]
golf
Louis Oosthuizen Takes Clubhouse Lead On Day One Of The Open...
Day one of the British Open got off to an exciting start at Royal St George’s on Thursday, with [ ... ]
golf
Rahm, Koepka Or Spieth? Simon Dyson Analyses The Open Championship's...
The oldest golf tournament in the world gets underway tomorrow as the world’s finest players meet [ ... ]
golf
Rory McIlroy Looking To End Major Drought At The Open Championship
Rory McIlroy will be hoping to make some history at The Open this week as he looks to become the second [ ... ]
golf
Simon Dyson Predicts “Fantastic” Koepka Will Triumph At The...
Simon Dyson has predicted that Brooks Koepka will win the Open Championship at Royal St George’s.  [ ... ]
golf
Jon Rahm Becomes First Spanish Winner Of The US Open With Stunning...
Jon Rahm clinched his first major title and became the first Spaniard ever to win the US Open with a [ ... ]
golf
Can Brooks Koepka Make It Three Wins From Four At The US Open?
He may have dropped to number 10 in the world rankings, but Brooks Koepka’s showing in the opening [ ... ]
golf
Money Grab Or Needed Reform? Premier Golf League Could ''Revolutionise''...
The much-debated proposal of a Premier Golf League worth £250million is “entirely feasible” [ ... ]
golf
PGA Championship: Phil Mickelson Makes History As Oldest Ever...
Phil Mickelson, at 50 years of age, has become the oldest ever winner of a major as he put in an incredible [ ... ]
golf
British Masters: Richard Bland Claims First European Tour Win...
Richard Bland has been playing golf on and off the European Tour since 2002 and has never won a tournament. [ ... ]
golf
British Trio Leading The Pack At Halfway In The Betfred Masters
We’ve reached the halfway stage of the Betfred British Masters and it’s been a ball-striking [ ... ]
golf
Everything You Need To Know About The 2021 Betfred British Masters
European Tour golf returns to the UK this week for the first time since October with the Betfred British [ ... ]
golf
There's Plenty Up For Grabs As The British Masters Returns To...
European Tour golf returns to the UK this week for the first time since October with the Betfred British [ ... ]
golf
Matsuyama Makes Masters History To Inspire New Generation Of...
Hideki Matsuyama has written his name into golf’s history books by becoming the first Asian player [ ... ]
golf
Masters Round-Up: Hideki Matsuyama Races Into Four-Shot Lead...
Hideki Matsuyama shot a 65 on Saturday to leapfrog Justin Rose heading into the final day of the Masters [ ... ]
golf
Justin Rose Leads The Masters As Defending Champion Dustin Johnson...
Heading into the biggest weekend in the entire golfing calendar, Englishman Justin Rose leads the way [ ... ]
golf
Masters Round-Up: Justin Rose Leads The Way As Tommy Fleetwood...
The opening day of the Masters was all about Justin Rose who opened up a four-shot lead after hitting [ ... ]
golf
2021 Masters Tee Times & Pairings - Thursday 9th April
The pairings for the opening two rounds of the Masters in Augusta have been drawn and now we know exactly [ ... ]
golf
The Masters: Jordan Spieth Ends Four-Year Winless Run Ahead...
It’s hard to believe Jordan Spieth’s Masters triumph was six years ago. Now 27, [ ... ]
golf
The Masters: Former Pro Simon Dyson Explains What It's Like...
The Masters returns this week as World number one Dustin Johnson looks to hold on to the Green Jacket. [ ... ]
golf
Westwood Back In The Top 20 After Runner-Up Finish At The Players'...
A magnificent second-place finish in the Players’ Championship this weekend has moved Lee Westwood [ ... ]
golf
Players Championship Can Provide Rory McIlroy With Much-Needed...
Spark. Mojo. Pizzazz. Whatever you call it, Rory McIlroy doesn't have it right now. When McIlroy [ ... ]
golf
Messages Of Support Flood In For Tiger Woods Following Serious...
The sporting world has rallied to send messages of support to Tiger Woods after the golf legend was [ ... ]
golf
Man, Megastar, And Mortal: The Book Examining The Second Life...
He’s the one name people who know nothing about golf, know about golf. But aside from the 15 Majors, [ ... ]
golf
Inside Michael Jordan’s Exclusive Golf Club, Where Drinks Are...
To the casual observer the Grove XXIII may seem like just another ordinary golf club in Hobe Sound, [ ... ]
golf
Caley Show That Buying Top Quality Golf Clubs Needn't Be Pricey...
A trip to the local golf course may seem like a distant dream for many of us, with the nation being [ ... ]
golf
The Best Gear And Gadgets To Get Your Golf Game To The Very...
“Confidence is the most important single factor in this game, and no matter how great your natural [ ... ]
golf
Flawless Colin Morikawa Is Golf’s Next Big Thing - But We Shouldn’t...
The world of golf witnessed one of the most remarkable feats in the sport’s history this weekend [ ... ]