Manchester United ended Manchester City’s 21-game winning run on Sunday. Of course they did. It was always going to be United, wasn’t it? If Ole Gunnar Solskjaer has had one thing consistently going for him during his two-year spell as United manager it has been his record in Manchester derbies.

While this was always likely to be one of their tougher cross-town assignments due to City’s recent run, it comes as no shock that Solskjaer and the Reds were the ones to cut Guardiola’s side down to size with a 2-0 win at the Etihad Stadium. That’s three wins in five games now for the Norwegian against City in the Premier League, with a single defeat back in his first derby in charge back in April 2019.

These games have been pretty much made for him to this point, with United able to play the counter-attacking game which makes them look so dangerous. It has, of course, been in other fixtures against teams waiting for United to make their move that they have struggled the most. If they could play City every week, United might just rack up more points over the course of a season.

They actually came out at City from the off here, and Gabriel Jesus’ rash decision to stretch out a foot which clipped Anthony Martial inside the area would be the jumping off point for United to play the way they know best. While Ederson got a decent hand to Bruno Fernandes’ spot-kick it wasn’t enough to stop United’s top scorer from registering for the 23rd time this season.

From that moment, it was teed up for United to play the waiting game. As the first half went on, City probed more and more but the visitors had their openings on the break. Early in the second half United doubled their lead from a surprise source, Luke Shaw sweeping the ball home from Marcus Rashford’s cut-back after Shaw had advanced superbly from a great piece of distribution by Dean Henderson. 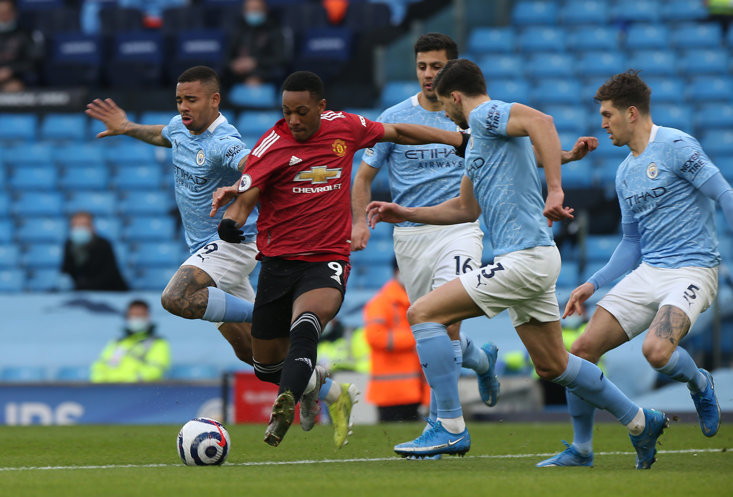 On days like this, there are no questions about United’s quality. Shaw continued his fantastic run of form from left-back, Henderson came in for David de Gea and looked comfortable throughout, Fred and Scott McTominay did enough to quell City’s ultra-mobile midfield threat, while Martial was the good Martial which has been missing for much of the current campaign.

"It's football, isn't it?" Solskjaer shrugged when asked by Sky Sports why we don't see more of this from the Frenchman. "Today he rediscovered himself, I feel. He was really strong on the ball, positive, and we have to be positive, we have to be a positive team. We want to play at a high tempo, of course we do, but we had to defend well. You've got to defend so that you can attack spaces that can appear. No one in the whole world of football, no team, has a chance against them without being a collective, and a hungry team."

That these days happen too rarely is the biggest bugbear for those United fans desperate for their times of domination to return. They have happened plenty against City since Solskjaer took charge, but the ‘other lot’ are about to clinch a second title in three attempts since the Norwegian arrived. They get the last laugh, whatever records are broken as part of United’s current 22-game unbeaten run away from Old Trafford.

No, these are the exceptions that prove the rule. The rule is, if United are allowed to sit in and counter they can be devastating. If they are not, they are dumbfounding in their ability to disappoint. They have part of their approach nailed, but they have things still to do, issues still to address and players still to add if they are to become a constant force which steals titles away from City rather than occasional Manchester pride in derby week.

The bragging rights are United’s this week. Now for the bit where they can brag for a year.