Football
News
It's the USA's performances as much as the results that have given other nations hope
Kris Voakes
14:57, 28 Jul 2021

We’ve been here before with the United States women’s national team… just not very often.

The last time they failed to win their Olympics group was at Atlanta in 1996. They still won gold. Their only previous group stage finish of anything other than first since then was at the 2011 World Cup, which they went on to reach the final of. They’ve been in this predicament before, and they’ve soon found their way out of it.

Only, it has never been quite this way in the past. Never before in the history of the Women’s World Cup, Olympic Games or continental championships have the USWNT failed to win two of their three group matches. The forgiving nature of a tournament which reduces 12 teams to eight for the quarter-finals has helped to stop their current malaise or it might have been far more terminal.

Thus far at the 2020 Olympics, Vlatko Andonovski’s side have beaten only New Zealand, with their opening 3-0 hammering by Sweden and the 0-0 draw with Australia condemning them to second place in Group G and sending them to Yokohama for a quarter-final clash with the Group F-topping Netherlands.

While the results have been record-breaking, it is the USA’s performances which have drawn most concern. Approaching the knockout stage with the likes of Megan Rapinoe, Alex Morgan, Rose Lavelle and Sam Mewis in your ranks is hardly a position of weakness. But the evidence so far has not suggested this is a team ready to win a fifth gold medal at the seventh attempt. Unusually, the US are failing the eye test, and the players and staff know it. 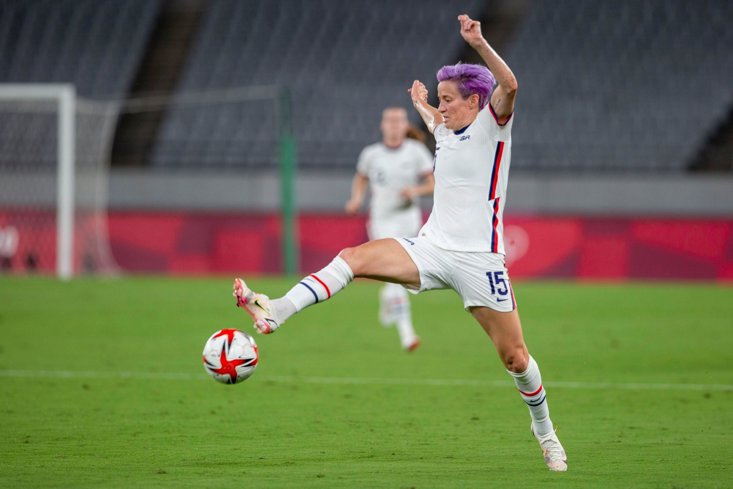 RAPINOE ADMITTED THE USA GOT "OUR ASSES KICKED" BY SWEDEN

“There were moments in the [Sweden] game where the team just didn’t look like the team that I’ve known for years, even before I coached,” Andonovski said of the Sweden humbling, per The Guardian.

“The mentality wasn’t there,” midfielder Lindsey Horan added. “We couldn’t really pinpoint exactly what it was, but that’s not ever the case for the US women’s national team.”

“We got our asses kicked, didn't we?” Rapinoe admitted. “I don’t even know how many goals we have given up this whole year. I don’t remember the last time we gave up a goal, so to give up three isn’t great.”

While they did enough in the next two games to reach the last eight, suddenly the USA look human. When they seemingly settled for a draw against Australia it was hard not to think back to the 13-0 win over Thailand at the 2019 World Cup and draw conclusions from the difference in approach. There appears to be less drive, less demand for the very best in every minute of every game.

This can’t all be about the loss of Jill Ellis as coach, with Andonovski having overseen a near-faultless run coming into the Olympics since succeeding the two-time World Cup winner in 2019. Ellis herself had her hand on the tiller when the US were knocked out at the quarter-final stage in Rio five years ago, beaten on penalties by a Sweden side who later drew the ire of legendary goalkeeper Hope Solo for their negative approach.

It feels like the current iteration is drifting somewhat. They could well buck up their ideas in the next week or so and do what they always do, playing a big part in the destination of medals. But there is also every chance that this time is different, with the sheen of invincibility seemingly gone. The Australia game proved that the Sweden loss was no one-off.

The Netherlands match, and any that follow, could go down in history as the make-or-break moment in the USA’s dominance of women’s international football.