Giovanni van Bronckhorst’s managerial reign at Ibrox got off to a flying start as his Rangers side secured their place in the knockout stage of the Europa League with a 2-0 win over Sparta Prague. A brace from Alfredo Morelos, who looked inspired in Europe once again was enough to secure second place in the group and means that Rangers have now made it out of the group in this competition for three successive seasons.

Van Bronckhorst was welcomed to his new home with a famous Ibrox roar and the positivity that flowed throughout the crowd quickly transferred to those in blue on the pitch, who seemed well up for the battle. Ryan Kent in the opening minutes was keen to run at the back line and his magic footwork created space for Joe Aribo, who saw his shot clip the top of the bar within two minutes.

If the Ibrox crowd wanted a signal of attacking intent after the departure of Steven Gerrard, this was it. In a more attacking 4-2-3-1 system compared to the 4-3-3 Gerrard tended to employ, the Gers were flying forward at every opportunity. Aribo was dangerous behind Alfredo Morelos with Kent and Ianis Hagi providing the width.

The striker was soon on the scoresheet after a flowing move from the Ranger front line, with Hagi providing the assist for Morelos’ sweeping finish. Ibrox roared as the Colombian wheeled away to celebrate the first goal of the Van Bronckhorst era. It truly felt like a landmark moment for this football club, which may seem like hyperbole given the success they enjoyed last season, but the former Eredivisie winning manager will have been desperate to get off to a positive start, especially on home soil. 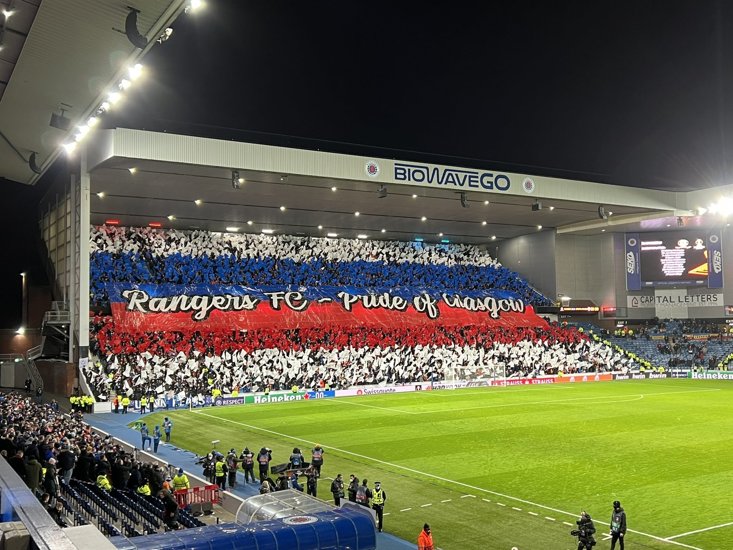 James Tavernier combined with Hagi who once again turned provider, this time for Aribo who couldn’t quite find the finish, before Allan McGregor proved his worth with a close range save. The second period of the first half was a more even affair as the visitors grew in confidence after a frantic start - yet Rangers were able to shut them out with some solid defensive play. The former Barcelona left-back watching on from the Ibrox dugout will have been just as satisfied with that part of the game as the swashbuckling attacking style his side came out of the blocks with.

Rangers didn’t need a helping hand, but a Sparta Prague defender provided them with one in the opening minutes of the second half. He strangely chipped the ball across his own box and it was met by the head of El Bufalo, who simply couldn’t miss. According to Opta, Morelos has now netted 13 goals in the UEFA Europa League since the start of 2018-19, a haul only Munas Dabbur (17), Bruno Fernandes (16) and Pierre-Emerick Aubameyang (14) can better in that time. Not shabby company to keep.

Celtic Dumped Out Of Europa League After Leverkusen Late Show

Allan McGregor pulled off an outstanding save late on to keep his clean sheet intact which will leave his manager in no doubt to who his number one is. "We are going to make sure our team are playing within their strengths and were hope to be very successful,” the man dubbed GVB said ahead of the match.

"The crowd are the 12th man for us, with a full Ibrox behind us the atmosphere can be amazing and I think it will help the team to go forward and to be successful."

After Lyon secured top spot with a 3-1 win at Brondby, Rangers now know they will be contesting knockout football in Europe in the New Year. A perfect present for their new boss.

Meanwhile after Celtic were dumped out in the early kick-off, Leicester secured a vital 3-1 win over Legia Warsaw which saw them go top of their group. Goals from Patson Daka, James Maddison and Wilfried Ndidi were enough for Brendan Rodgers’ side who are far from secure in top spot with one game to play - as a trip to Naples awaits.