Darts
News
The world number one is out after a comprehensive performance from the defending champion
Simon Lillicrap
22:08, 22 Jul 2021

Blackpool delivered our first two semi-finalists of the Betfred World Matchplay on a thrilling night which saw Krzysztof Ratajski and Dimitri Van den Burgh make it to the final four. Here is how another brilliant night of arrows unfolded at the Winter Gardens.

After a composed display not befitting of the size of the occasion, Polish superstar Krzysztof Ratajski is through to the semi-final of a major for the first time.

The Polish Eagle is just getting better and better on the big stage, and is now just two matches away from lifting the Phil Taylor Trophy this week. He always looked in control of this entertaining quarter-final as he averaged 97.3 and hit a sensational nine 180s which certainly got the capacity crowd on their feet.

Having beaten Glenn Durant and Rob Cross to make it this far, a memorable tournament for Callan Rydz comes to an end, but he certainly won fans in Blackpool this week thanks to those enthusiastic performances.

But it is the Pole who makes it through to the final four after a measured display. He took an early lead into the first break with a 116 finish which saw him 7-3 up and from there, he didn’t look back. He relentlessly kept hold of his own throw, with 15 darts in one leg and moved into a 12-5 lead which turned out to be unassailable for his plucky opponent. A 141 finish put him one away and he made no mistake in the final leg with a double eight to finish the match.

“It's something great for me. It doesn't matter who I play, it will be a very big match for me," he said after the win.

Now he is forging new ground at the World Matchplay, where he will take on the defending champion Dimitri Van den Burgh after a thrilling match on Thursday night. 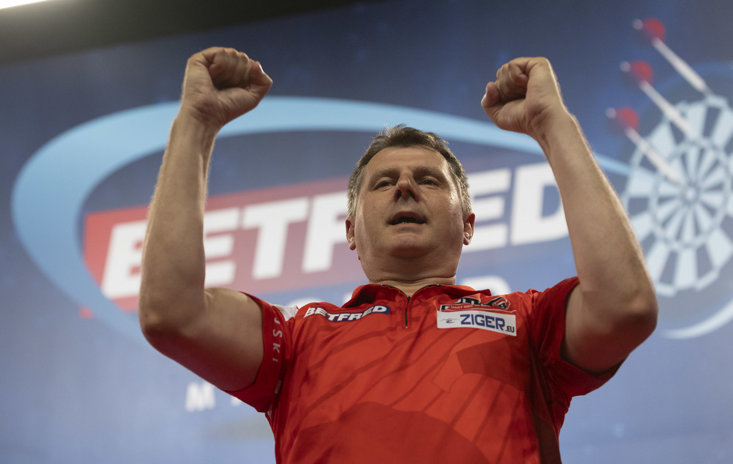 The world number one came up against the reigning World Matchplay champion in an exceptional contest that saw the reigning champ come out on top and knock out Gerwyn Price by winning the seven of the last eight legs.

After a blistering start from the Belgian which gave him breathing room, Price brought out the dance moves just before the break having won three legs on the trot to cut the lead to just one with the scores at 8-7. The Welshman looked throughout the opening period to be attempting to gee himself up, and when he finally got going, he celebrated with a spin fitting of Blackpool’s famous ballroom.

That seemed to be a dig at his Belgian opponent who returned from the break a new man. After a few missed doubles from his opponent, he took full advantage to take a 12-8 lead and he seemed to thrive under the pressure, often gesturing to the crowd that he had things under control with his calm persona. 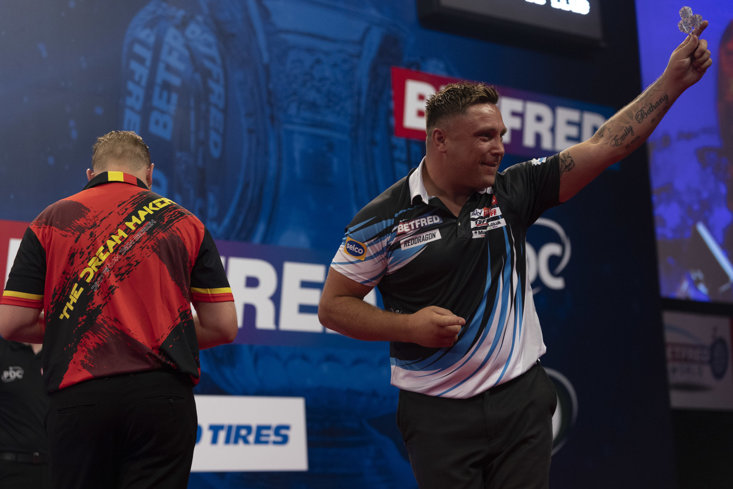 Two more legs followed as he continued his dominance which gave the world number one all sorts of issues. He missed a double top and then missed double five to win leg number 23, as his opponent kept his nerve to take a 15-8 lead. From there, the result was only a matter of time as the champion looked in great shape to defend his crown.

"It was sexy darts, this is big, this is big! His dance made me smile, it didn't put me off. They are little things that we call mental games," he said after the win.

A thrilling night of darts concludes with the world number one heading home having once again failed to make the final four at the World Matchplay and Dimitri Van den Burgh dancing on the stage. Bring on tomorrow night, where Michael van Gerwen and Peter Wright are both in action!