Darts
News
The Dutchman faces Jonny Clayton in the semis in Milton Keynes
Kris Voakes
15:02, 28 May 2021

The Dutchman earned first place after the 16-round league stage, winning six of his last seven matches to edge out debutant runner-up Jose de Sousa. Van Gerwen was dominant through the second phase, losing only to Nathan Aspinall as he turned decent early form into table-topping darts.

His reward is a semi-final clash with Jonny Clayton, whose 8-6 win over Dimitri van den Bergh on Thursday saw him qualify for the last four at the Belgian’s expense. It was quite the fall from grace for Van den Bergh, who had led the table for much of the first phase, only two lose five of the seven second-phase fixtures and finish up in fifth spot.

For De Sousa, there is a very real chance of causing an upset in his first season in the Premier League following a second-phase display bettered only by Van Gerwen. The Portuguese had been facing elimination for much of the early rounds, sitting in ninth place after five matches and with only four nights left to miss the top-eight cut. 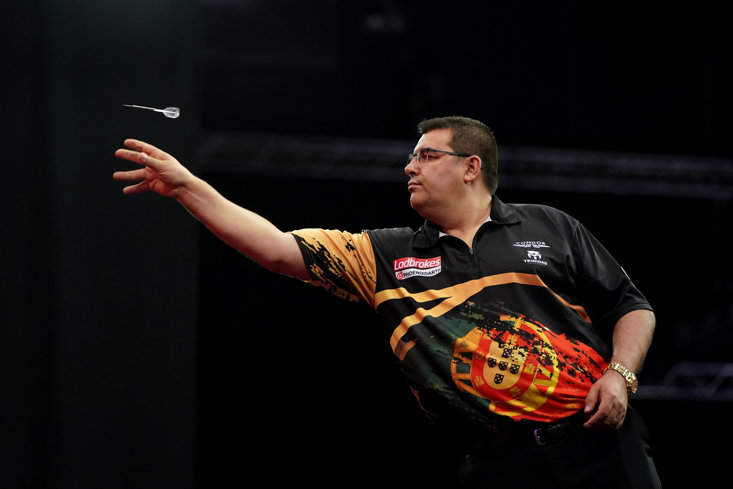 JOSE DE SOUSA HAS HAD AN EXCELLENT FIRST CAMPAIGN

But wins over Van den Bergh, James Wade and reigning champion Glen Durrant helped him progress and his stunning second-half form sees him come up against fellow wildcard Aspinall in Friday’s second semi-final. Aspinall was the runner-up to Durrant in 2020 and will fancy his chances of making the final again despite his middling form in the second phase.

The best-of-19 semi-finals precede the best-of-21 final at the Marshall Arena in Milton Keynes on Friday, with Van Gerwen hoping to add to his quintet of titles in the absence of world number one and current world champion Gerwyn Price, who was forced to withdraw from the competition after testing positive for Covid-19 shortly before it began.

Van Gerwen is Betfred’s 13/10 favourite to take home the trophy in front of around 1,000 spectators, while De Sousa is the 11/4 second choice.