So the longest Formula One season of the lot has finally reached its titillating climax. In Abu Dhabi this weekend either Lewis Hamilton will win his record-breaking eighth title, or Red Bull’s Max Verstappen will be crowned champion for the very first time. It has been a mighty battle so that both drivers enter the final race level on points, but just how did we make it to this dramatic finale? Here’s the tale of the tape, and how the season has unfolded so far.

Bahrain feels like a lifetime ago but the season opener gave us a taster of just how tight this campaign was going to be. Red Bull’s promised pace soon turned into a reality as Verstappen qualified on pole, but it was Hamilton who took the chequered flag on the opening weekend after his title rival was forced to give first position back to him after an illegal overtake - as the Brit struck the first blow of the title race.

Any thoughts that Hamilton would be on course for another straightforward title win went out of the window in that opening race, and he was stunned after taking pole in Italy, as Verstappen raced to victory. The Brit won in both Portugal and Spain to give himself a 14 point lead over the Red Bull driver who saw a fastest lap point taken away from him due to breaking track limits in the Algarve, before a slow pit stop cost him victory in Spain. After just four races, it was Hamilton 94, Verstappen 80.

As the season got into full swing, Red Bull started to land heavy blows. Verstappen won in Monaco to take the lead in a F1 Championship for the first time in his career and won an astonishing four out of five Grands Prix to assert himself as the outright favourite for the title.

His dramatic win in the French GP, where he overtook Hamilton on the penultimate lap was one of the highlights of the season and although the seven-time champion was reasonably consistent, Mercedes simply could not compete with Red Bull over this time period. In fact, over 10 races between Spain and Russia, Hamilton only stood on the top of the podium once, but boy was it an important marker. 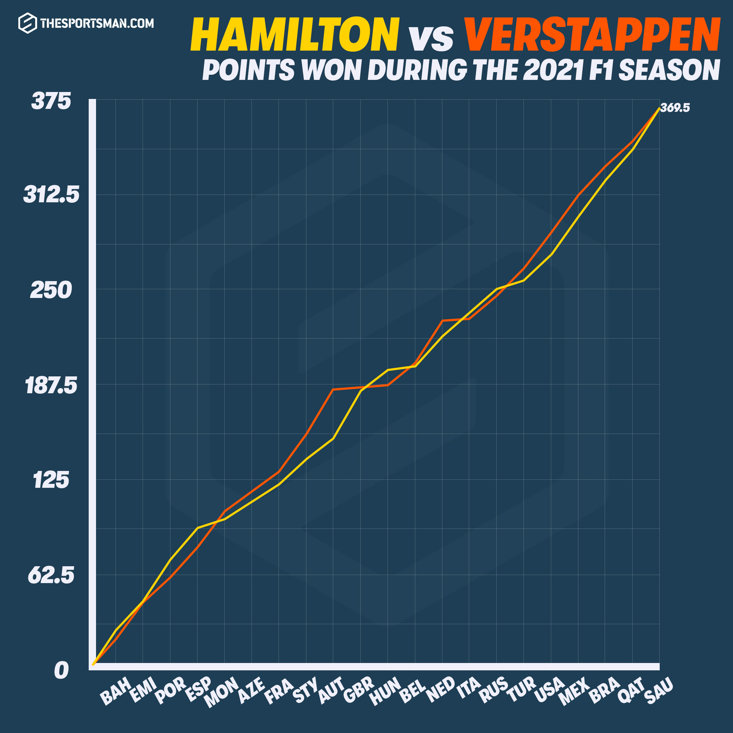 Verstappen came into the British Grand Prix having recorded four straight poles, four wins in five races and with a lead of 32 points over the man aiming to defend his crown. If it was going to change anywhere for Lewis, it would be Silverstone. The Belgian-Dutch racer won the first ever F1 Sprint, but collided with the home favourite in dramatic fashion in the race, which saw Hamilton go on to win, and Verstappen finish with only three points front the weekend.

Esteban Ocon bagged the shock result of the season as he won in a chaotic Hungarian GP before the rain in Belgium gave us the half points that mean the standings are exactly square heading into the final race. Verstappen won on home soil just as Hamilton had done to retake the championship lead.

At one point during the season it appeared as if the weight of being stuck on 99 career wins was dragging Hamilton down, but he finally got his century in Russia. Countryman Lando Norris began on pole and recorded the fastest lap but it was Hamilton who took a historic win as Verstappen was forced to start from the back of the grid.

Bottas dominated in Turkey , before back-to-back wins for Verstappen in Mexico and the USA respectively stretched his lead to 19 points and looked to have put the championship trophy in his hands.

But this is Sir Lewis Hamilton, and he doesn’t give up easily. A dramatic late overtake in Brazil cut the lead to 14 points and the Brit held off his rival in Qatar to cut the lead to eight. In Saudi Arabia he levelled the scores with his third win on the trot, while Verstappen himself has had to settle for three consecutive second place finishes as his lead helplessly evaporated.

And so it all comes down to this. All down to one race. Abu Dhabi has never been the most entertaining of circuits for racing but changes have now been made to the track to address that and with these two on a collision course for the title, we should have an action-packed weekend of sporting drama.