Jonas Vingegaard has won the Tour de France for the first time after safely seeing out Sunday’s processional final stage in Paris, with Jasper Philipsen claiming the final stage win on the Champs Elysees in Paris.

Vingegaard’s win comes after a sensational battle with two-time reigning champion Tadej Pogacar, who he deposed in the yellow jersey in a captivating stage 11 on the Col du Galibier and Col du Granon before surviving a series of bold attacks from the Slovenian over the final week and a half. The dramatic ding-dong contest was one of the most compelling confrontations in recent Tour history.

After finishing second to Wout van Aert in Saturday’s individual time trial to Rocamadour and picking up an extra eight seconds on Pogacar in the process it was clear 25-year-old Vingegaard was about to be crowned champion, with Sunday’s stage 21 being a traditionally uncompetitive affair in general classification terms.

The Dane’s victory is his first Grand Tour success and improves on his second-place finish in France 12 months ago. He had never won any major stage race previously, even beyond the top level of competition, with runners-up spots in the Tour of the Basque Country in 2021 going alongside similar results this year at the Criterium du Dauphine and the Tirreno-Adriatico as his best showings.

But he made the most of having a strong Jumbo-Visma team alongside him, with the likes of Van Aert, Primoz Roglic, Sepp Kuss and Steven Kruijswijk having all played major roles in helping to keep in touch with – and later stave off – Pogacar at various points. While Jumbo-Visma had key withdrawals later in the race, the loss of key domestiques in Pogacar’s UAE Team Emirates helped to play into Vingegaard’s hands. 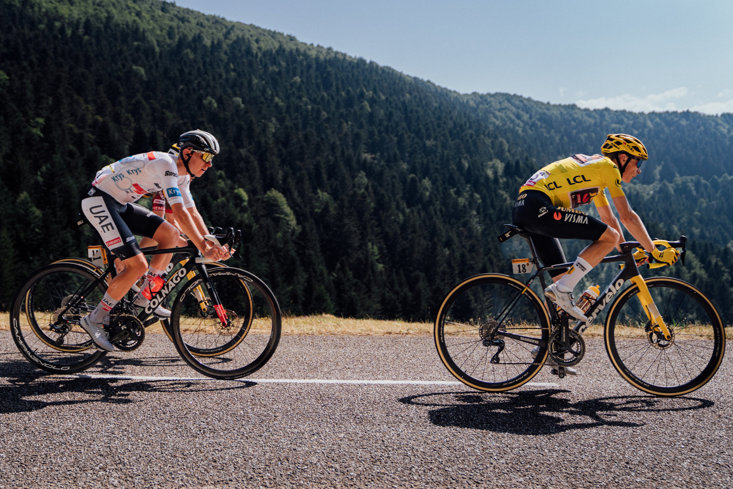 Besides winning the GC, Vingegaard also takes away the polka-dot jersey after topping the King of the Mountains category, while teammate Van Aert claimed the green points jersey for the second straight year with four days to spare. Only Pogacar’s capture of the white jersey for the best young rider stopped Jumbo from achieving a clean sweep of individual categories, while Manchester-based Ineos Grenadiers were crowned the winners of the team classification.

Pogacar ended two minutes and 43 seconds behind Vingegaard in the GC having won both of his previous tilts at Le Tour.

Vingegaard is only the second Danish rider to win the Tour de France, following Bjarne Riis’ success in 1996. Riis, though, later admitted to doping during that race and organisers no longer consider him a former champion despite the UCI, cycling’s governing body, refusing to officially strip Riis of his title.

Thus, in most observers’ minds, Vingegaard is the first true winner from Denmark in a fitting twist given that this year’s first three stages took place in the new champion’s home nation.