A second night of medal-winning drama, disqualifications, disappointments and delight enveloped all of us watching the European Indoor Athletics from Torun last night. And how we’ve missed major championship meets because of it!

One-day events are great for marvelling at fast times and season’s bests, but nothing quite matches the intensity when major medals are on the line.

In terms of global quality, arguably the stand-out performances came from the women’s long jump and the final track race of the night, the men's 60m.

Germany’s world and European outdoor champion Malaika Mihambo started as favourite in the long jump, but looking at the line-up for the final she would have known adding this title to her collection would be no easy task. All seemed on track though when she produced the leading jump in the third round with a well-timed season's best of 6.88. But judging by her 6.80 reply, Ukraine’s world outdoor silver medallist Maryna Bekh-Romanchuk was in the mood.

She closed the gap on the German to just 2cm with her 6.86 in the fifth round, and as a result she had the penultimate jump of the competition. A fiery character on and off the runway, she looked pumped and has a history of moving up leaderboards with her final effort.

This was top class belief and execution under pressure. Leaping out to 6.92 and a world lead, she crouched by the track waiting to see if Mihambo could wrestle back the gold that had been hers for three rounds.
The German produced a huge response, but even her mercurial talent cannot overcome taking off 29cm behind the board! A roar of delight from the Ukrainian told us it was silver this time for the brilliant Mihambo. MIHMABO HAD TO SETTLE FOR SECOND

In the men’s 60m final there was never a doubt where the gold was going. Lamont Marcell Jacobs of Italy in Lane 6.

The former Texas-based long jumper (who soared to a slightly windy 8m 48 in 2016) switched to sprinting after injury, and represents Italy through his mother’s heritage. They have a star on their hands.

His acceleration over the last 30m was superb and he stormed across the line to a new world lead and national record of 6.47 and a winning margin very rarely seen over the shortest race in the sport. Germany’s Kevin Krantz was a distant but delighted second in 6.60 and Slovakia's Jan Volko out-dipped Britain’s Andy Robertson for the bronze.

And where a fabulous Friday saw gold and bronze for British women in the 3,000m, a scintillating Saturday saw their female teammates add 3 more podium finishes with bronze medals of contrasting emotion in the 400m and pole vault, and a dramatic silver in the 1,500m.

Holly Archer probably needed a lie down by the time her evening finished. Not from the exertion required to muscle her way to silver behind Belgium's Elise Vanderelst in the women’s 1,500m, but from the succession of disqualifications, protests and counter-protests which eventually saw her restored to her original finishing position.

Commentator Steve Cram made the valid point that in such a slow tactical race, everyone could be seen jostling for position before the burn up for the finish. Archer had done well to find a gap on the inside and stuck to her task brilliantly over the last 100m for a breakthrough moment. 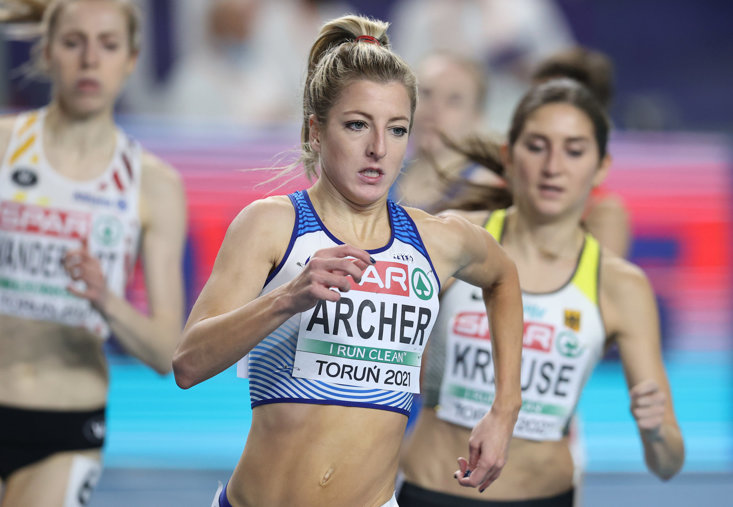 Whereas one British Holly was jolly, the other was not. Holly Bradshaw has been outstanding so far this spring, making her overwhelming favourite in the women’s pole vault. Champion as a youngster way back in 2013, this was her bid for a second Euro indoor title and she started well enough with first-time clearances at 4.55 and 4.65. Yet inexplicably she failed all three attempts at 4.70, a height she’s comfortably surpassed in every other indoor competition this season.

In a surprise climax to the event, Switzerland's former world junior champion Angelica Moser cleared a lifetime best of 4.75 for the gold, while Slovenian Tina Sutej's successful first-time vault at 4.70 pushed Bradshaw down into joint-third.
A big major championship performance is clearly in the locker and may well be forthcoming this summer, but her frustration was clear to see as she had to settle for third.

And so to the British team captain in the 400m. Pitched against Femke Bol, one of the stand out athletes on the world indoor tour (with four Dutch national records in 23 days) Jodie Williams knew anything less than total commitment would rule out a podium finish, and she bravely - and rightly - blasted from the start in lane 1.

At the bell she was in third, with Bol out in a class of her own and the hugely-experienced Polish European outdoor champion Justyna Swiety-Erseric in second. Once ahead, Bol was never to be stopped, shaving 0.01 from her European lead and national record with 50.63 to become the first Dutch woman to win the title.

Swiety-Ersetic was clearly delighted with silver, and that left Williams to overhaul the tiring figure of Bol’s teammate Lieke Klaver for the bronze. It was her first individual medal on the track since Commonwealth and European silvers over 200m in 2014. This bodes well for her one lap outdoor aspirations.

It all rounds off in Poland tonight with a brilliant finale, including both 60m hurdles, both 800’s and a mouthwatering men’s 3,000m. Savour every second, it’s been a fantastic watch so far!