Athletics
News
The elite-only race in April will provide the Kenyan with the perfect opportunity to bounce back after a poor showing in London
Rob Walker
11:30, 18 Feb 2021

The greatest is back. That's the headline this morning from NN Running, the Dutch Sports agency who look after Eliud Kipchoge, the reigning Olympic Marathon Champion and the first man in history to run the iconic distance in under two hours.

Last week they announced an innovative partnership with the organisers of the Hamburg marathon to lay on a closed doors looped course event on Sunday April 11th, providing more than 100 elite men and women a vital opportunity to chase an Olympic qualifying time for Tokyo.

Today they officially reveal the icing on the distance running cake with the news that Kipchoge will be the star attraction for viewers all over the world.

The significance of his participation is two-fold. It's likely to be our only chance to see him in action before he attempts to successfully defend his Olympic title in Toyko later this summer (touch wood!). But perhaps even more important than that, it's an opportunity for him to bounce back from the only disappointing marathon of his otherwise glittering career in London last autumn.

Hugh Brasher's team did a fantastic job to provide a safe platform for two elite fields on October 4 and for the men's race in particular we were all looking forward to watching a duel between the two fastest men in history.

It was billed as Kipchoge against Kenenisa Bekele, his great rival on the track all those years ago and the man who came within two seconds of Kipchoge's world record the previous year in Berlin. Sadly for Bekele, (who I still think has another fast one in him,) a calf injury ruled him out at the last minute. That led us to believe we would be watching another procession for Kipchoge, who was attempting to win his fifth marathon on the streets of the capital and the 12th of his career. (The only time he hadn't won over the distance was his second marathon in Berlin in 2013, in which he finished runner up in a PB of 2.04.05 behind compatriot Wilson Kipsang's world record breaking 2.03.23.) 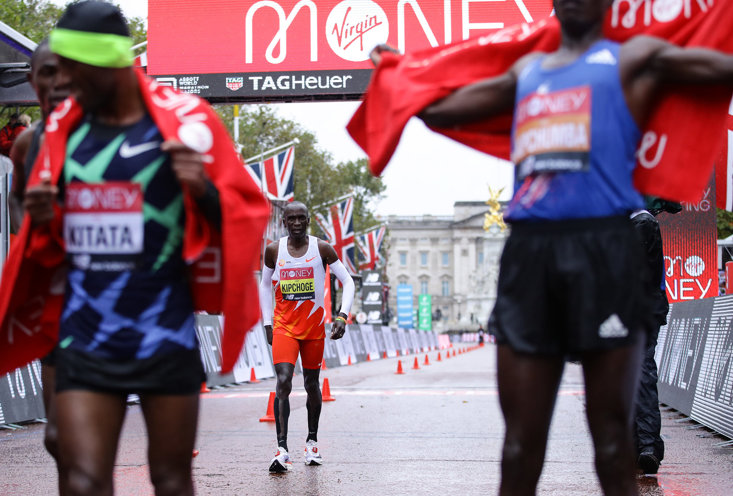 For most of the race it all seemed pretty smooth for the world record holder. The pace wasn't searingly fast but we were aware it was a chilly morning and this was meant to be an occasion more about winning and celebrating the sport than watching the clock. But all of a sudden the famous half smile half grimace for which he's famous, began to look uncomfortable in a way we hadn't seen before.

I was commentating with the excellent Mara Yamauchi (sixth in the Beijing Olympic marathon 2008 and second in London in 2009,) and neither of us could believe what we were seeing. No-one could.

Kipchoge was dropping back from the leaders at what was - for him at least - a relatively modest pace.

The story of the race had changed. Now it wasn't a case of how fast he would run but how many would pass him before the finish line. Ethiopia's Tola Shura won in 2.05.41 and (almost unthinkably before the race,) another 6 finished ahead of the defending champion.

The reaction from those around the finish line was not too dissimilar to the stunned second of silence that greeted the end of the men's 100m final at the London World Championship in 2017, as the crowd tried to compute that they'd just seen Usain Bolt beaten into 3rd by Justin Gatlin and Christian Coleman. 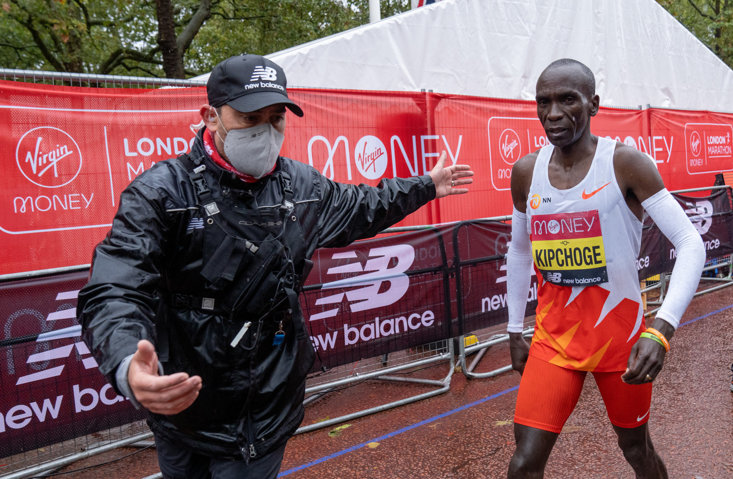 In those rare moments it's as if the athlete's own personal disappointment and disbelief is also somehow yours as well. Such is the excitement and emotional investment you make in sharing some-one else's remarkable journey. Kipchoge is the epitome of graciousness and dignity (in all areas of life) and after a few minutes he duly appeared for a live interview with Gabby Logan. You could tell straight away something wasn't right. His answers spoke of disappointment and he alluded to a problem with his ear which had potentially affected his balance and sense of equilibrium. But he was also visibly shivering and looked freezing.

I was later told by a coach on site that the weather down on the course itself was far far colder than it had appeared on tv.

Whatever the reasons for how it unfolded, the simple fact was that the greatest had run an average marathon. And anyone who knows him will tell you, this proud Kenyan will be burning to get back on the big stage.

His team will have analysed every second of that race and such is his own drive for perfection, those moments at the end in London will have added even more motivation on the long winter runs back home. And in a funny kind of way, I think Kipchoge's tough day in London was actually a timely reminder of just how good he is.

Elite male and female distance runners sometimes make running a marathon look a lot simpler than it actually is. 26.2 miles is a significant test for the body and mind, at any age and at any pace. And the faster you run, the closer you are to that invisible line beyond which even the most finely tuned bodies can falter.

What we saw from Kipchoge last autumn was that he is human and that what he has managed to do in his other races so far is almost superhuman.

He is now 36 years of age. And just as was proven with even the brilliant Usain Bolt, father time waits for no man or woman, irrespective of ability. We should savour what we see in Germany.

I have no doubt he will be back to his best and that he will lay down the perfect marker for Tokyo. And IF there is Games and IF he wins gold again, what would there be left to do or to prove? He is a once in a generation athlete and the end of his career is beginning to loom large over the horizon. Hamburg on April 11 is not to be missed.

x
Suggested Searches:
Tyson Fury
Manchester United
Marcus Rashford
Lewis Hamilton
F1
Air Jordan
More
athletics
Walker The Talker: Holloway Breaks Colin Jackson's 27-Year-Old...
The Curtain came down on the World Indoor Tour in spectacular fashion last night at the Villa De [ ... ]
athletics
Walker The Talker: Giles Records Second Fastest Indoor 800m...
So far this spring we've had some brilliant action and times on the World Indoor Athletics tour [ ... ]
athletics
Walker The Talker: Gabby Thomas Comes Close To History In Action-Packed...
A freezing cold Saturday of sport was rounded off perfectly with late-night Athletics action across [ ... ]
athletics
Walker The Talker: World Indoor Tour Action Builds Anticipation...
With so much uncertainty still surrounding Tokyo this summer, what a relief it's been for Athletics [ ... ]
athletics
Our Guide To Surviving The Day After The London Marathon
From the cardboard cutouts of the Queen across a special course around St James’ Park to the 45,000 [ ... ]
athletics
The Real Running Podcast - Infotainment And Inspiration For...
The consequence of our reactions to the pandemic has had the slitheriest of slithers of silver linings. [ ... ]
athletics
The Olympic Podcast Special Celebrating Daley Thompson's Glory...
For Olympic enthusiasts of a certain age, prepare to feel very old. This year marks forty years since [ ... ]
athletics
When Jesse Owens Stole The Spotlight From Hitler At The 1936...
Since assuming the role of Chancellor of Germany in 1933, Adolf Hitler had earmarked the 1936 Summer [ ... ]
athletics
Get The Most From Your Training With These Five Incredible Running...
There’s no question that thanks to a technological boom, the running experience has never been [ ... ]
athletics
Visa Sponsorship Renewal Gives Olympics Welcome Boost In Uncertain...
Visa have extended their sponsorship of Olympic athletes until 2021, after this summer’s games [ ... ]
athletics
How Marathon Runners Can Stay Focused And Feeling Good During...
There are many of us who should have been making our final preparations for a marathon right now. With [ ... ]
athletics
Team GB's Tom Bosworth May Not Travel To Olympics Over Coronavirus...
Team GB’s top racewalker Tom Bosworth may not travel to the Olympic Games this summer, if we do [ ... ]
athletics
Gender Balance Is A Reality At Tokyo 2020 Thanks To Flag-Bearer...
The Olympics Opening Ceremony is one of the most iconic events on the planet. Every country’s [ ... ]
athletics
Five Tokyo 2020 Stars Who Will Be Surfing, Skating And Climbing...
157 days. That is all that is left between today and the opening ceremony at the Tokyo Olympics, the [ ... ]
athletics
Dina Asher-Smith Will Welcome Fraser-Pryce's Decision To Do...
The stage is set. The gauntlet has been laid down. In Tokyo, Team GB’s Dina Asher-Smith will be [ ... ]
athletics
Book Review: The Runner By Markus Torgeby
As the publishing industry is the envy of the Premier League, in that it takes a midwinter break and [ ... ]
athletics
The Exo-Skeleton Suit That's Helping Smash Limitations And Break...
With all the criticism surrounding VAR in football at the moment, it is important to take a moment to [ ... ]
athletics
The Running Trainers So Good They Could Be Banned By World Athletics
Ever heard of the running trainer that made athletes too quick? Nike’s record-breaking running [ ... ]
athletics
Taking The Knee & Hand Gestures Banned From ''Politically Neutral''...
More than half a century after Tommie Smith and John Carlos created one of the most prevailing, [ ... ]
athletics
Alistair Brownlee Sets His Sights On A Tokyo 2020 Triathlon...
The lure of Tokyo 2020 is just too much for Alistair Brownlee, who has said he aims to compete at this [ ... ]
athletics
With Lessons In Hygiene And Hydration, Team GB Targets Medal...
UK Sport are hopeful that the 2020 Olympics in Tokyo will be the most successful of all time for Team [ ... ]
athletics
Paris Olympics 2024: Surf’s Up...10,000 Miles Down The Road,...
Excited for Tokyo 2020 yet? Well before we dive headfirst into athletics action in Japan there’s [ ... ]
athletics
Coaching US Runner Jordan Hasay Is The Next Chapter For Paula...
Paula Radcliffe is remembered for many things, being a world record holder, crouching to relieve [ ... ]
athletics
Nick Butter Becomes First Person To Run 196 Marathons In 196...
The Sportsman’s favourite marathon man Nick Butter has completed his incredible target of running [ ... ]
athletics
Groundbreaking Gene Testing Could Spell The End Of Doping In...
Doping has long been the scourge of sport. Some of the most high-profile names have been found [ ... ]
athletics
Top Athletes Left In Shock As 200m Is Cut From Diamond League...
The Diamond League has announced that the 200m will be one of four events cut from its core events in [ ... ]
athletics
Hand Washing And The Marginal Gains Helping Team GB Succeed...
Hygiene will be a key component as Team GB look for marginal gains at Tokyo 2020. It may sound a little [ ... ]
athletics
Nothing Left To Chance As Eliud Kipchoge Attempts First Two-Hour...
This weekend, the fastest marathon runner ever will attempt to record an athletic achievement that will [ ... ]
athletics
Five Things We Learned From The World Athletics Championships
The controversy-stricken World Athletics Championships came to a close on Sunday evening with Great [ ... ]
athletics
Katarina Johnson-Thompson's Journey from Imposter Syndrome To...
Prior to this year, the World Athletics Championships has consisted of tears, despair and heartbreak [ ... ]