Sports
News
With no fans, things are going to feel different this summer but there is still an undeniable buzz around Tokyo 2020
Rob Walker
11:58, 18 Jul 2021

Well here we go then. Whatever people think about whether it could, should or would happen, Tokyo 2020 is at last almost upon us. And not before time in my opinion.

My first Olympics was Athens 2004 and as I write this I’ve just touched down in Japan ready for my fifth Games. I can honestly say I feel as excited as I did all those years ago as a younger, somewhat less wrinkled athletics fan who boarded the flight for Greece wide eyed and unsure what the greatest sporting show on Earth would actually be like in the flesh.

Reminiscing with my Dad last week, I was reminded of how long ago that was as I recalled that on my one morning off from working behind the scenes in the broadcast centre for the BBC, I went to the athletics stadium to watch an 18-year-old Usain Bolt in the heats of the men’s 200m.

Many will forget the fact that Tokyo represents the first Olympiad without the greatest male sprinter in history since Sydney 2000.

Truth be told Athens came a little too soon for Bolt, who failed to make it out of his heat. There had been a lot of noise about the young Jamaican as he had set a world junior record of 19.93 in April that year (age 17) less than two years after winning the World junior title as a 15-year-old on his home track of Kingston in 2002.

As a stroke of luck, I had been chosen to accompany BBC Radio 5 Live’s brilliant Mike Costello to Jamaica in May that year to help out on his exclusive Interview with the fledgling star. And what’s more, whilst Costello was busy spending time with Bolt for 5 Live, I’d been offered the chance to interview the very young 100m specialist Asafa Powell for Athletics Focus. 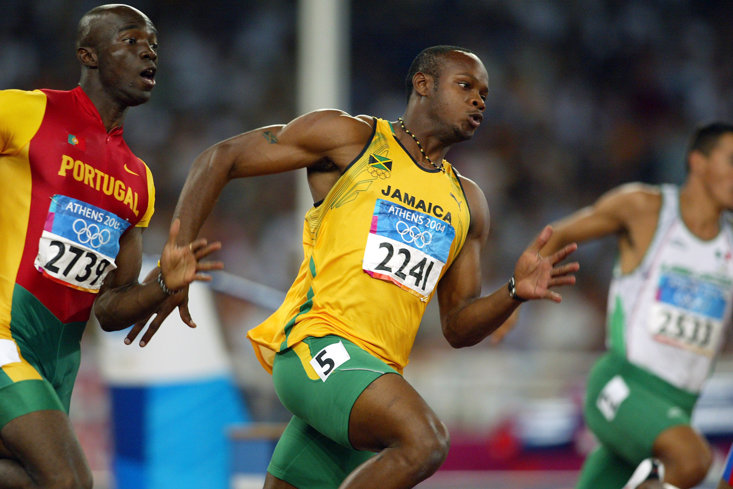 At that time Powell was a complete unknown on the global stage, partly as he had the misfortune to be drawn in the same quarter-final as Jon Drummond in the men’s 100m at the previous years World Champs in Paris.

Those of a certain vintage will remember Drummond being DQ’d in 2003 but then lying down on the track and refusing to move for well over half an hour. It was an embarrassment for the sport and it unsettled the young Powell (who was also subsequently disqualified) and therefore he didn’t have the chance to give us a glimpse of what was to come the following summer.

By the time the Games arrived in ‘04, the 100m was teed up to be a duel with him against Maurice Greene, who had won the Olympic title four years earlier. As it turned out, a certain unflappable American by the name of Justin Gatlin did the business, with Powell back in 5th and Greene picking up the bronze.

Anyway, I digress. Despite what cynics may say about the authenticity of the modern Games being brought into question by those who wish to exploit it merely as a cash cow, there is an undeniable buzz around this quadrennial festival.

Heathrow Airport was quiet yesterday but the sight of brand new tracksuits of all colours and the instantly identifiable five rings embroidered onto pristine tops was a reminder of where and why we were all heading to the Far East.

Yes, there are significantly smaller numbers of us actually on site and yes, the athletes village won’t be the same for those talented enough to be returning for a second, third or fourth Games. Yet, despite all that, it’s here and will unfold in all its glory in less than a week's time.

Of course, it won’t be the same buzz for the athletes to perform in empty arenas and stadiums, but what will not be lost on any of them is their collective and individual ability to inspire from afar. The viewing figures from Tokyo 2020 could be absolutely huge, with so many countries and families forced to rely on what they can watch, as opposed to do, waiting for the return to “normality.”

Since terrorism tried (tragically but unsuccessfully) to define the 1972 Munich Games, there is a strong argument that Tokyo 2020 represents the most important symbol of hope and global sporting equilibrium of the last four decades. 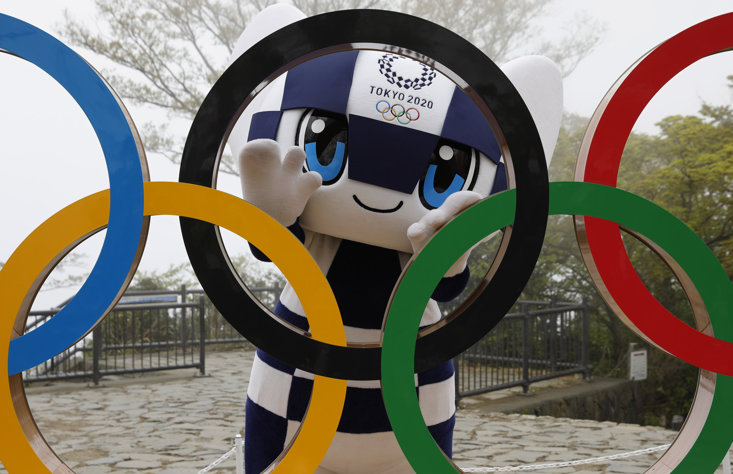 There will be heartwarming and heartbreaking stories in equal measure, along with many, many world records from those looking to remind themselves and others of what they have sacrificed and dreamed of for many many years.

In many regards it is going to feel different and odd. With no crowd how could it not? But those of us lucky enough to be here owe it to the Japanese public, the athletes and those fans/relatives/friends who have been told to watch from home, to do our bit to try and help bring the drama to life. And after the extraordinary drama of the Euros and England’s run to the final, it feels as if the British public are ready to embrace what’s to come.

I was asked to appear on Vernon Kay’s Team GB podcast this week and it was a lot of fun as he and fellow presenters came up with their favourite British Olympic moments which I then had to recreate in Comms via YouTube on the show.

Their choices? Daley Thompson ‘84, Kelly Holmes ‘04 and Jessica Ennis-Hill in 2012. No one ever tires of reliving iconic glory days and neither did any of us.

A new generation of British stars are waiting in the wings ready to etch their names into international sporting history. All we have to do now is sit back and watch - even if the majority are doing so from thousands of miles away.

x
Suggested Searches:
The Sportsman
Manchester United
Liverpool
Manchester City
Premier League
More
sports
Phil Kessel And Other Consecutive Appearance Records In Sport
Vegas Golden Knights forward Phil Kessel has broken the National Hockey League's 'ironman' [ ... ]
sports
Relocating A Sports Team: Can It Ever Work In Britain After...
This week, Rugby Union lost another one of their great sides from the Premiership as Wasps went into [ ... ]
sports
Betfred Offer 500/1 On England Football, Rugby League & Cricket...
It's going to be a busy couple of months in the world of sport with three men's World Cups on [ ... ]
sports
Whose Royal Patronages Support Sport In The UK?
The Royal Family has changing roles following the death of Queen Elizabeth II but their dedication to [ ... ]
sports
The Sporting World Pays Heartfelt Tribute To HM Queen Elizabeth...
The sporting world has united in tribute to Queen Elizabeth II after her passing on Thursday afternoon. [ ... ]
sports
How The Sporting World Will Proceed After The Death Of HM Queen...
After the sad passing of Her Majesty Queen Elizabeth II the sporting world, and indeed the whole country, [ ... ]
sports
The Sportsman's 119/1 Weekend Accumulator: Usyk And Navarette...
Good afternoon and welcome back to another Sportsman’s accumulator where we take a look at where [ ... ]
sports
The Sportsman's Weekend Accumulator: Coutinho, Stockport And...
The Sportsman is back for another weekend accumulator and this time, we’ve got our experts on [ ... ]
sports
The Sportsman's 16/1 Weekend Acca Including Boxing, Football,...
It has been a long time since we last put one of these together but The Sportsman’s acca [ ... ]
sports
Brilliant For Birmingham: BBC's Ayo Akinwolere Can't Wait For...
The Commonwealth Games returns to British soil this week, with a 10-day celebration of athletic achievement [ ... ]
sports
Serena, Venus And Sport's Best Sibling Rivalries
Today marks the 20th anniversary of Serena Williams’ first Wimbledon win in 2002. The legendary [ ... ]
sports
WATCH: Hot-Dog Eating Champ Joey Chestnut Chokes Out Protestor...
The current sporting world is littered with all-time greats; Tom Brady, Lionel Messi, Cristiano Ronaldo, [ ... ]
sports
Hustle And The Best Sports Films Currently On Netflix
The Adam Sandler renaissance is in full-swing with the Happy Gilmore star’s latest effort, Hustle, [ ... ]
sports
WWE’s Class Of 2002: Two Decades of Dominance, Inside and Outside...
In 2002, just over a year removed from the ‘Monday Night Wars’ between his World Wrestling [ ... ]
sports
Muhammad Ali And The Greatest Trash-Talkers In Sport
Today marks six years since we lost the great Muhammad Ali. Boxing’s most beloved star was as [ ... ]
sports
What Did The World Of Sport Look Like When Queen Elizabeth's...
Queen Elizabeth II celebrates her Platinum Jubilee this week and to commemorate the occasion, we have [ ... ]
sports
Dream Weekend Turns Sour As Huddersfield Fail In Challenge Cup...
It was meant to be the perfect sporting weekend for the town of Huddersfield. With their football and [ ... ]
sports
Monaco, The Masters And More Unbelievable Experiences In Sport
This weekend sees the Formula One teams, fans and staff arrive in the principality of Monaco for the [ ... ]
sports
Tony Hawk's Impact On The World Of Skateboarding Cannot Be Understated...
In the Smithsonian, a baby blue Bahne skateboard sits proudly on display as part of the National Museum [ ... ]
sports
The Saudi Golf League And Other Breakaway Competitions In Sport
There appears to be a civil war looming in golf as the PGA Tour continues to fight back against the [ ... ]
sports
Britain's Top Ten Greatest Sporting Achievements Featuring Roger...
Four minutes. One mile. The seemingly unbreakable human barrier was brought tumbling down by Roger Bannister [ ... ]
sports
Triple H’s Legacy Lies With WWE’s Next Generation
All that remained was a pair of black boots. Black boots that signified the end as they stood proud [ ... ]
sports
Kevin Owens’ History-Making WrestleMania Match With Steve Austin...
The well trodden adage surmises that heroes are worth avoiding, should you ever be presented with the [ ... ]
sports
The Deadman Didn't Rise: Revisiting The End Of The Undertaker’s...
75,167 people can be just as deafening when they are dead silent as when they are roaring in unison. [ ... ]
sports
The Barkley Marathons: The 100-Mile Race That Broke All Of Its...
In 1977, James Earl Ray, the gunman behind the assasination of Martin Luther King Jr., embarked on an [ ... ]
sports
International Women’s Day: Ten Female Superstars To Watch Out...
In honour of this year’s International Women’s Day, we take a look at ten female sports [ ... ]
sports
How Sport Is Handling The Russian Invasion Of Ukraine
The Russian invasion of Ukraine has cast a shadow over our world, with an uncertain darkness hanging [ ... ]
sports
2022 Commonwealth Games: Eight Stars To Look Out For In Birmingham
In just 150 days, the eyes of the world will be fixated on Birmingham for the 22nd Commonwealth Games, [ ... ]
sports
Looking Back At The Most Calamitous Sporting Performances In...
There is nothing worse when it comes to being a professional athlete than when you have a performance [ ... ]
sports
Talent In Tartan: Why 2022 Could Be The Year Of The Scots
Scottish sport thrived in 2021, with star athletes from north of the border making waves on a global [ ... ]