Athletics
News
it was a fabulous Friday night for several Brits at the European Indoors in Torun and one they won't forget in a hurry
Rob Walker
16:15, 06 Mar 2021

What a relief. After so many weeks and months of disruption to the global and domestic athletics calendar, fans of the sport were relishing the prospect of settling down to watch three consecutive evenings of major championship medal winning action at the European Indoors in Torun, Poland.

In fact, huge credit was due to the organisers in the self-styled "City of Sport" for ensuring the 31st edition of the event somehow survived the latest COVID restrictions. A massive amount of work has clearly gone into enabling 700 athletes (including 46 Brits) to give themselves an important test and a great platform ahead of the outdoor season in this Olympic year.

So far this spring, the World Indoor Tour has produced some simply superb men's and women's 1,500m and 3,000m races and last night it was the long stuff that dominated the headlines once again.

Britain's brilliant 1,500m runner Laura Muir may have opted to focus on the forthcoming summer and her Tokyo campaign rather than an attempt to successfully defend her 3,000m title, but that left an excellent opportunity for three of her younger compatriots and there were high hopes of an early medal strike for the travelling team over 15 laps.

Amy Eloise-Markovc, Verity Ockenden and Amelia Quirk stayed with the pace early on, looking comfortable and controlled. Among the danger women at the front were Dutchwoman Maureen Koster and Selamawit Bayoulgn of Israel. 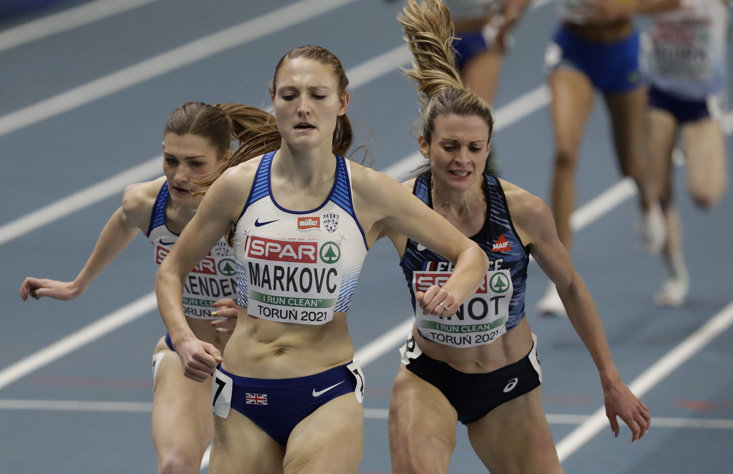 One by one contenders fell away as Bayoulgn poured on the pressure, but the three British women were running cleverly and managing to stay out of trouble, especially when a tiring Koster (clipped by a heel) went crashing down and out of the race with just over two laps remaining.

Quirk was the first of the British trio to drift back from the leaders, but this was her senior international debut and she ran brilliantly for a four second PB in fifth.

At the front Markovc looked the strongest on the final lap, but Vicky Ockenden was determined to push her teammate right to the line, trying to come wide on the outside round the bend. Where she began to tire, in form French Champion Alice Finot started to close. Not enough to deny Markovc the title, but separating the two British women on the podium with a fine run for silver. And Ockenden was clearly delighted with the bronze.

Two medals by the British women, an excellent platform for the rest of the long weekend in Poland. Cynics may say that Markovc's PB winning time of 8.46 would not exactly trouble the world's leading East Africans, but a European title is still a significant career milestone, demonstrates tactical awareness and gives both women deserved confidence heading to the outdoor season. And after all, following in the footsteps of former British champions Yvonne Murray, Helen Clitheroe and Laura Muir is no mean feat. 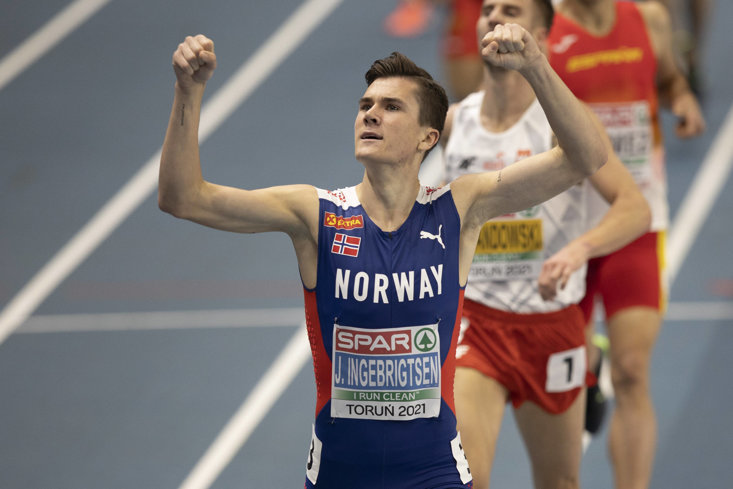 Remember this is the lad who did the European double outdoors over 1,500m and 5,000m in 2018 as a 17-year-old and having watched him scorch to fifth on the all-time list indoors with 3.31 in Lievin last month, we couldn't wait to see him in action.

Arguably his closest challenger was, once again, Polish veteran Marcin Lewandowski, the defending champion who ran a National record of 3.35 here in this stadium two weeks ago. Not as fast as the Norwegian but, ever the master tactician, he was aiming to make it a hat-trick of 1,500m titles after victories in 2017 & 2019 (and his fourth European indoor title overall after victory over 800m back in 2015.)

British interest lay in Giffnock North's Neil Gourley (who had a point to prove after being forced to withdraw from the final 2 years ago feeling unwell) and Wimborne's European under-23 silver medalist Piers Copeland.

The wily old campaigner Lewandowski went straight to the front in a bid to dictate the pace and ensure it wasn't too fast from the start, but as soon as Ingebritsen realised his rival was trying to slow it down, he hit the front and with a 28.3 lap the field split immediately. The Pole gamely gave chase in second with Spaniard Jesus Gomez the only other athlete willing or able to hang on.

Out front the fastest man in the world this year, looked as composed as ever and with a 4m gap growing from the three medal positions to the rest, it almost became a case of watching twos eparate races. (Gourley tried to lead the chasers but he eventually faded to 12th, leaving Copeland to finish strongly for fifth.)

In the battle at the front, full credit to Lewandowski. Rather than trying to make sure of silver, he dug in with two laps to go and although Ingebritsen never quite looked like relinquishing the lead, the Pole made him work very hard on the last lap. In a repeat of the podium two years ago, Gomez took bronze once again, while Ingebritsen reversed the 1-2 from Glasgow for European title number four ahead of Lewandowski. Or did he?

Slow motion replays from early on appeared to show a brief clash of shoulders with Poland's Michel Rozmys and the subsequent stumble from Ingebritsen forced him to step on the inside. It looked innocuous enough as he was reacting to a push and simply trying to stay on his feet. But just before the BBC came off air news broke of the Norwegian's disqualification. However, his team lodged a successful counter protest and by the end of the evening the officials had seen sense. Ingebritsen was the rightful champion.

And from a neutrals perspective, we get to watch the two great rivals go toe to toe again on Sunday evening in the men's 3,000m. It promises to be one of the best races of the Championships.

In terms of emphatic starts to a final, Miltiadis Tentoglou's opener in the men's long jump will take some stopping this weekend. The defending champion leapt out to brilliant world leading 8.35, a jump so far he was level with the furthest end of the stadium's electronic board! 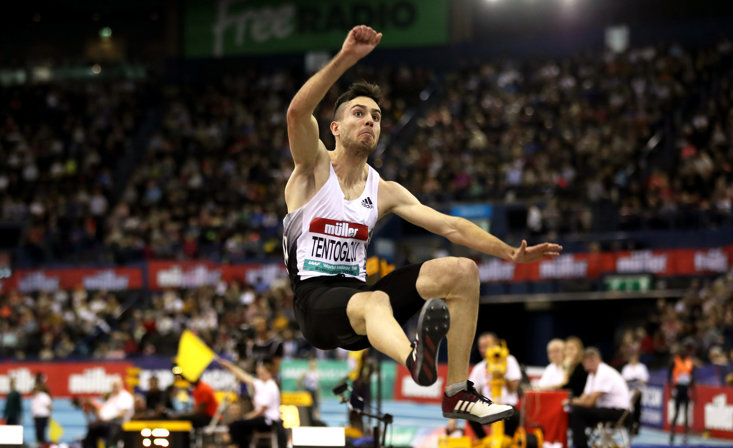 Surely no-one would get anywhere close to that mark, and with three subsequent passes and two further fouls it's a good job they didn't for the Greek, but in what turned out to be a very high quality final, Sweden's Thobias Montler started well with 8.04 and then moved to within 4 cm of the lead with a national record leap of 8.31m in the third round. In a fine sequence of jumps that was to be his best effort of the night. Silver again behind the same man who pipped him in Glasgow in 2019.

Another moment of national history beckoned in the last round as Finland's Kristian Pulli launched himself out to 8.24, adding the national indoor record to the outdoor mark of 8.27 that he set last year. Great Britain's Jacob Fincham Dukes was seventh with 7.79.

From a global perspective there was huge interest in Belgium's reigning Olympic heptathlon champion, Nafissatou Thiam. After missing most of last season with an elbow problem, she looked back to her best and ready for the summer battle against world champion Katarina Johnson-Thompson (who withdrew before travelling to Poland after experiencing a niggle) following an excellent showing in the women's pentathlon.

Head and shoulders above the rest, she put together an excellent sequence of performances including a slightly rusty looking 1.89 in the high jump, 15.16 in the shot putt and a solid 2.18 in the 800m. Her total of 4904 was a new national record and puts her seventh on the all-time list indoors.  If she and Johnson-Thompson both arrive in Tokyo fit and injury free, their duel could be one of the stand out events of the Games. Here's hoping.

There was further good news for the ever burgeoning tradition of British combined event athletes, after highly promising 20-year-old Holly Mills finished her senior debut with an excellent fifth place overall. Helped by an excellent hurdles and high jump, a personal best in the shot putt and a very brave 800m, in which she took it on from the start and reached half way in 64 seconds, she looks more than equipped with the talent and belief needed to challenge the best in the world.

The Andover athlete was rightly delighted at the company she was keeping in Torun. 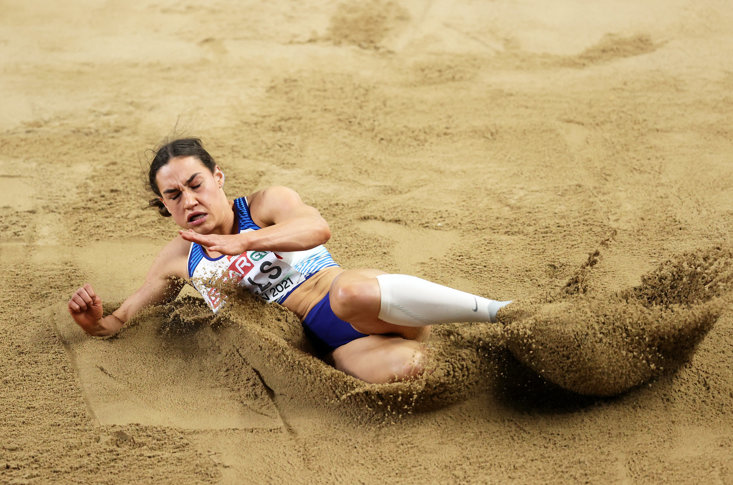 The evening's other final saw the big boys out for the men's shot putt and how a knowledgeable home crowd would have roared for this genuinely world class line-up including Poland's defending champion Michal Haratyk. Last month he produced a new PB of 21.83, but he couldn't quite match that last night, despite an excellent series of throws in which he surpassed the 21m line four times.

His fifth round effort of 21.47 was good enough for silver this time and the host nation's first medal of the event, behind close rival Tomas Stanek. After finishing second back in 2017 and taking bronze in Glasgow two years ago, the Czech republic athlete completed the European Indoor medal set with his fifth round throw of 21.62 for the long-awaited title. Filip Mihalijevic of Crotis completed the podium taking bronze with 21.31. Excellent early season marks by all three.

Saturday night promises to be just as good from a British and global point of view with finals in the men's and women's 400m, women's 1,500m and pole-vault on another brilliant night for the sport.  For Amy-Eloise Markovc and Vicky Ockenden, it was a fabulous Friday night they won't forget in a hurry.