Athletics
News
Rob Walker rounds-up of all the best action from the penultimate leg of the World Indoor Athletics tour in Poland
Rob Walker
10:30, 18 Feb 2021

So far this spring we've had some brilliant action and times on the World Indoor Athletics tour and the penultimate round in Torun, Poland, last night more than lived up to its star studded potential. Even without the lure of next month's postponed World Indoor Championships, this series of meets has given some of the sport’s best a chance to show their class and blow off a few cobwebs with the outdoor season not too far away.

Organisers of the Copernicus Cup (as the meet is officially known) were secretly hoping for a World Record or two and with good reason. American sprint hurdle world champion Grant Holloway had gone close to Colin Jackson's 27-year-old eye-watering mark of 7.30 last week in France, whilst Kenya's Beatrice Chepkoech arrived fresh from her 14.43 5k world record on the roads of Monaco on Sunday.  And while both were involved in impressive races, the performance of the night belonged elsewhere.

Since the indoor tour began in Karlsruhe at the end of January, we've been treated to some brilliant men's and women's middle distance action and that trend continued in Poland's self styled "City of Sport." In the men's 800m, all eyes were on Great Britain's Elliot Giles, who was looking for a hattrick of indoor tour wins. He's been in great nick so far this spring and after his 1.45 win in Lievin, I remember commenting that in the right race with the right opponents, there was a very fast time in his locker.

Boy did he prove it last night! 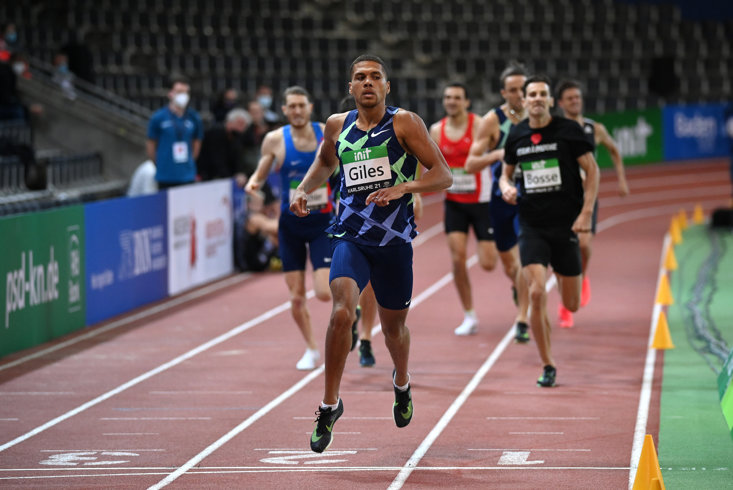 In what turned out to be the stand out moment in Torun, he was never more than half a step behind the pacemakers, storming through halfway just outside 50 seconds, looking full of running. As if to add even more excitement for the British fans, compatriot Jamie Webb tried to come wide on the outside, (buoyed perhaps from his personal best run in Staten Island on Saturday.) His attempt on the lead was short lived, Giles was imperious and knew it was a great run as he crossed the line.

Yet his reaction of delight showed that even he was taken aback by the brilliance of the time; 1.43.63 a massive personal best, national record, world lead and second on the all-time list. It really was some run and a night he won't forget in a hurry.

Webb hung on for second in a superb 1.44.54 and is second on the British all-time list (ahead of double Olympic Champion Seb Coe) and taking the notable scalps of Sweden's Andreas Kramer in third and Poland's world indoor champion Adam Kscot in fourth.

The women's four-lap race saw one of a number of thrilling performances from in-form Ethiopians. In fact, such was Habitam Alemu's winning margin if you had tuned in after the gun, you could have been forgiven for thinking that was the end of 3,000m. She was miles clear by the time she crossed the line in a very impressive meeting record 1.58.19, having set her stall out early, going through half way in an unofficial split of 57 plus change. Nearest to her was the experienced Polish woman Joanna Jozwik, the former European bronze medallist (indoors and out,) ran just a shade outside two minutes for second. 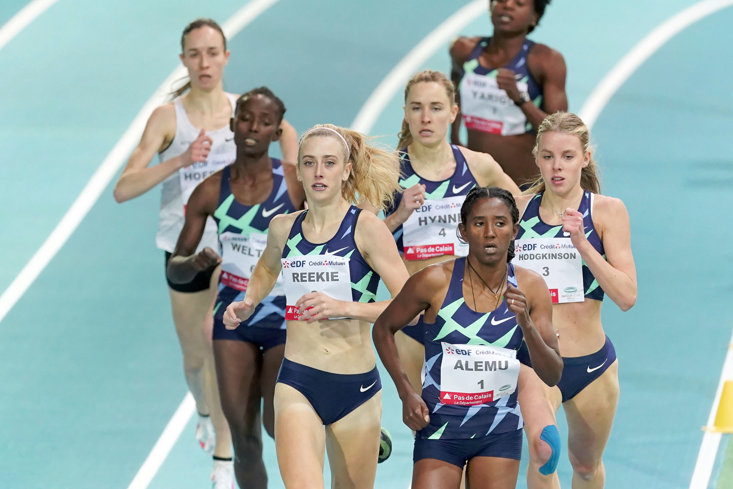 The evening's other middle distance race saw world indoor 3,000m silver medallist Selemon Barega stepping down from his favoured events for the chance of a very fast time over 1,500m. Remember, this is the Ethiopian who has run 12.43.02 for 5,000m outdoors which puts him 5th on the all time list whilst still a teenager. Incredible speed endurance for some-one so young.

He was up against the veteran local hero Marcin Lewandowski who ran so well for outdoor bronze behind Timothy Cheruiyot in Doha at the World Champs two years ago. He's no slouch indoors either with three European titles to prove it.

Barega had warmed up for this with a 7.26 PB over 3,000m in Lievin and he was superb again here on a tremendous night for the East Africans. So strong on the last 2 laps, he crossed the line just a shade under 3.33 for yet another lifetime best and a superb time indoors. Lewandowski proved there's life in the 33-year-old dog yet with a national record of 3.35.71 in second, while Great Britain's Neil Gourley completed the podium with an excellent PB of 3.35.79 in third. 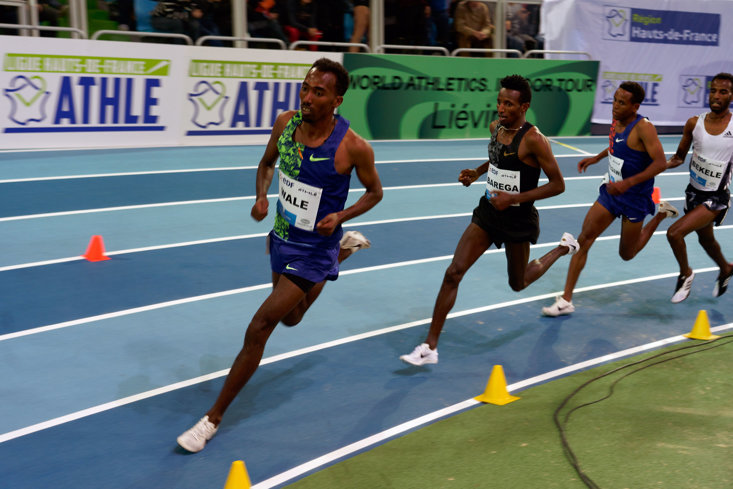 And so to Chepkoech and this star-studded women's 3,000m. The Kenyan was up against a very strong contingent from the other side of the vast rift valley. All looked good for the reigning steeplechase world champion early on, and with three laps to go she had shaken off all but two of the field. Ethiopia's Former world youth champion LemLem Hailu was tucked in right behind her, with her compatriot Fantu Worku just about hanging onto the relentless pace in third.

Just as we were ready to watch the Kenyan strike for home, Hailu stormed to the front with 250m to go with a devastating burst of acceleration and despite a valiant chase, Chepkoech ran out of steam. Perhaps the exertions of her road race on Sunday were still in her legs.  Her time of 8.31.72 was a great effort for second but she cut a tired figure as Hailu embarked on a well deserved lap of honour after lowering her own World Leading mark with 8.31.24.

Five of the top seven broke their lifetime bests. Not the outcome many were predicting, but a high quality race nonetheless.

So to the short stuff which certainly didn't disappoint.

Femke Bol was head and shoulders above the rest in the women's 400m, the 20-year-old lowering her own Dutch National Record with 50.66 and there followed a brace of intriguing sprint hurdle races.

The women were up first with world indoor silver medallist Christina Clemons looking to beat outdoor world record holder Keni Harrison's time of 7.82 from Saturday night in New York. Finland's Nooralotta Neziri has had a great indoor campaign so far, but a poor start put paid to her ambitions of an upset. Clemons got stronger as the race went on, finishing in 7.81, to take a hundredth of a second off compatriot Harrison's world lead. 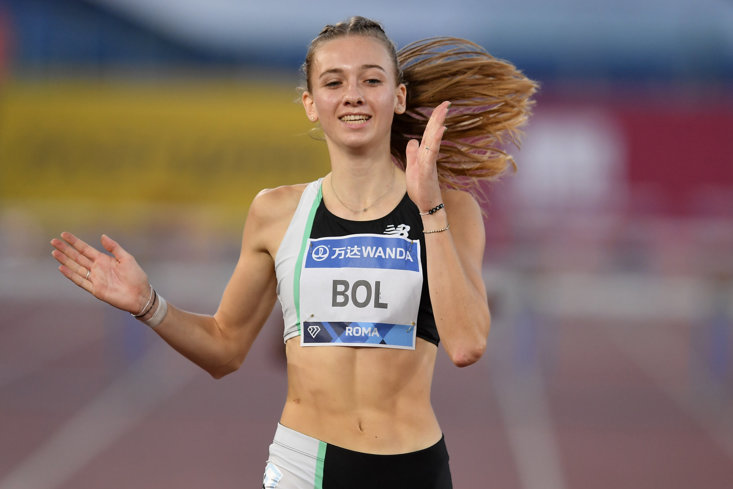 Then came Holloway. When in full flow this sensational American is sublime to watch and it is surely just a matter of time before he breaks Colin Jackson's 7.30 world record. He arrived with the five fastest times in the world this year and second on the all-time list just over a week ago in Lievin.

However a succession of faulty starts - none of which looked his doing - ate into his reserves of nervous energy. After three failed attempts to start and the disqualification of Artur Noga on the outside, it was a solid rather than spectacular start for Holloway. He edged ahead at 20m and when he was into his full and considerable stride, he streaked away. 7.38 is a superb time, but agonisingly shy of Jackson's mark once again.

One last chance left for him next week in Madrid, maybe the altitude will give him the perfect platform? Let's hope so!

An American also had the final say in the last track event of the night. Javianne Oliver was the fastest qualifier for the women's 60m with an impressive looking 7.12 in the heats earlier in the evening and lined up as favourite for the final.

She was put under immediate pressure by Poland's fast starting Ewa Swoboda, but pulled away from her and the fast finishing swiss Ajla Del Ponte for an excellent 7.08, equalling Dina Asher Smith's world lead from January.

The indoor action has been an excellent tonic for athletics fans everywhere with just one more stop on the tour to come next week in Madrid. The world records remained elusive last night… I suspect they won't next Wednesday in Spain.