Rarely has a first round qualifier for the Betfred World Snooker Championship been more keenly anticipated than this match between Stephen Hendry and Jimmy White, two of the sport's household names who so famously contested four world championship finals in the 90s.

All of them were won by the great Scot, who we now know was on his way to permanently etching his name in the history books, courtesy of a relentless pursuit of excellence few others could match.

His ice cold, clinical demeanour was always in total contrast to White's man of the people image. The Jack the Lad who everyone wanted to know and everyone wanted to see lift Sheffield’s famous old silver lady. Their vastly different approaches and personalities did nothing but fan the flames of intrigue and made their matches irresistible to watch.

As a result no one could quite believe it when last month's draw produced a line up which included the seven-time world champion returning from retirement against the sport's perennial runner up, White.

Between them they amassed 46 major ranking titles and in their prime this would have been spectacular. In reality this was a fascinating but far from vintage encounter - exactly what we expected with nerves jangling for both last night at Sheffield's English Institute of Sport.

Once the draw was made public, both were quick to announce their pre-match commitments would be minimal. Not that either was being a diva, but they instantly understood the nostalgic pull the renewal of their rivalry would generate in media circles and beyond.

Hendry had only played one match since coming back from his 2012 retirement. A 4-1 defeat to good friend Matthew Selt in the first round of the Gibraltar Open in Milton Keynes last month. But his opponent played out of his skin, so the only clue as to his form was the century which brought his solitary frame of the encounter.

Jimmy warmed up with a run to the last 16 of the same event and started as favourite for the match, their eighth in world championship competition. Hendry leads their Sheffield head-to-heads 5-2, having beaten White in the 1995 semi as well as the four finals. (For the record, White's two victories came in their first match at sport’s spiritual home, a last 16 decider in 1988 and their most recent meeting in the last 32 a decade later.)

Despite the lack of match time, wasn't it almost inevitable that Hendry would somehow manage to revive White's demons of doubt all these years later? Sadly for Jimmy’s global army of absent fans, from 1-1 that's exactly he did. 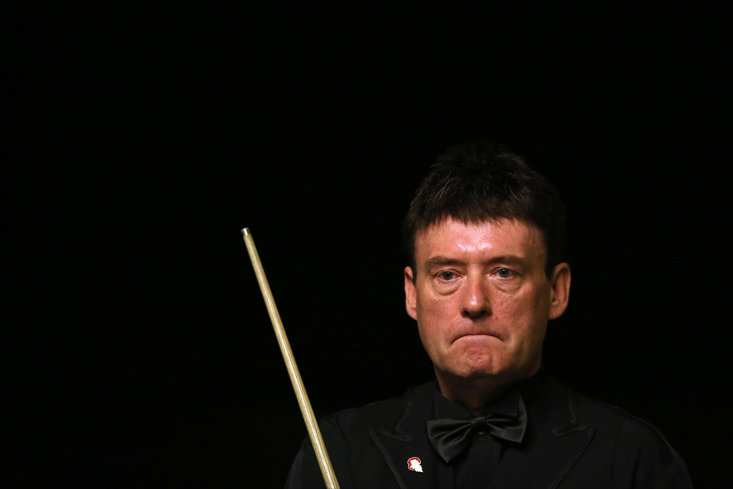 Jimmy built up a lead of 33 in the third, but Hendry fought on with dogged determination, taking it down to the last two colours, requiring a snooker on the pink. After a marathon safety exchange, in which both left the other multiple chances, Hendry finally clinched it. 2-1.

43 minutes well worth the effort, he was in front for the first time in the match. The Scot then doubled his advantage to 3-1 before the mid session interval with a break of 53.  After the restart White's nerves continued as the man he first played 35 years ago edged closer to the winning line at 4-1.

In the fifth frame the Whirlwind's fans would have taken heart from an excellent break of 58, but after missing a tricky red to the bottom left, the door was ajar once more for Hendry, who cleared the table with a classy 66 - arguably his highlight of the match. Ominous signs for his opponent. Five frames in a row for the King of the Crucible.

Had there been any kind of crowd allowed to watch the match the cries of "Come on Jimmy" would have surely echoed around the cavernous Sheffield arena. 5-1 down, White needed inspiration from somewhere.

He showed some heart with another break of 58 and this time, assisted by a fluke on the yellow, he managed to get over the line and keep the match alive at 5-2.

The ten-time ranking event winner and 1984 Masters champion added further respectability to the scoreline to take the next for 5-3, but Hendry was not to be denied and finished the job with his third half century of the match to register his first professional win on tour since 2012.

By his own admission when I interviewed him afterwards Hendry said at times they were both poor and it wasn’t pretty, but a win is a win and his thoughts now turn to taking on the world number 82 Xu S,i who awaits him on Wednesday night.

He's three matches away from a return to the Crucible but knows he will have to improve on that twitchy performance to stand any chance of walking down the famous stairs once more. Jimmy by contrast looks likely to have lost his place on tour after that defeat and will have to wait to see if Snooker Chairman Barry Hearn will offer him another two year discretionary card.

After four decades of service to the sport, many in snooker regard that as a mere formality and the least the six-time world finalist deserves. He continues to be a great ambassador for the sport and surely the publicity surrounding this one match alone is evidence enough that he's still held in the highest regard both within the sport and in the public's affection. I’d be amazed if Hearn doesn’t play ball.

While Jimmy waits for that decision, he now has ten days off before beginning his commitment as a Eurosport pundit for the Betfred World Championships. A break to come to terms with yet another Hendry defeat and contemplate his probable return next season.

By contrast Hendry now has less than 48 hours to prepare for his next match. He couldn't actually do this and make a return to the crucible a week on Saturday could he? We'll find out whether he can take one step closer tomorrow night at 7.30pm. As he himself said, unlikely but not impossible. Fascinating.