The Curtain came down on the World Indoor Tour in spectacular fashion last night at the Villa De Madrid meet in the Spanish capital.

The Centro Deportivo Municipal Gallur arena has been hosting internationals for the last 5 years and the high altitude of 625m brought with it the promise of high drama and fast times, both of which were delivered in style!

So far in this five-event series American Grant Holloway has been utterly sensational. The stand-out star over 60m hurdles indoors this spring has repeatedly threatened Olympic silver medallist Colin Jackson's 27-year-old world record and this was his last chance to make history before the summer season begins.

The added carrot was to secure the overall tour title which would bring a cheque of $20,000 and guaranteed entry to next year's twice-delayed World Indoor Championships. But, for Holloway, this was a night about the world record. Pure and simple.

In the heats it initially appeared that he had run a very sharp 7.34. That very soon got even better, as the official time was rounded down (that became important later) to a PB-equalling area record of 7.32. Holloway was clearly in the mood.

In the final an hour later there was only ever going to be one winner.... but the question was how fast the 23-year-old could get to the finish line. 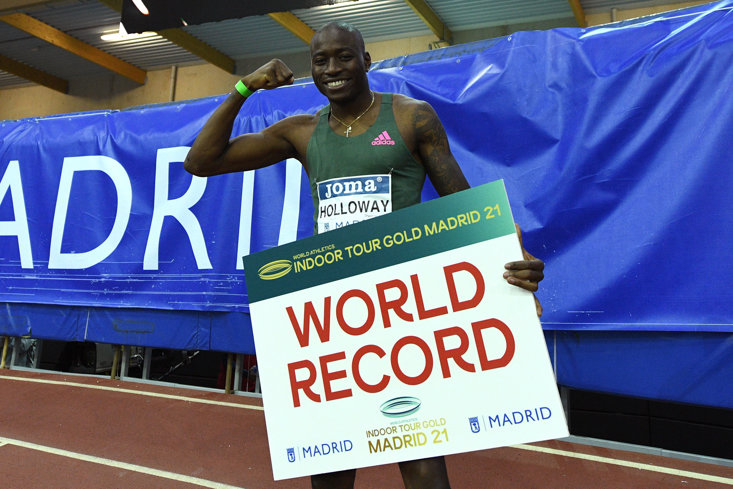 Last to rise into the set position as always, Holloway was poetry in motion when he got moving and as he swept across the line for his 54th consecutive indoor victory – an incredible winning streak that dates back to 2014 – he was desperately looking around for the electronic screen to see the time.

Unofficially, the clock had stopped at 7.32, which would have been his third run just shy of the 7.30 target.

Yet, as if they knew something we didn't, the photographers and organisers began to crowd around Holloway, whose eyes were scanning the arena in every direction as he sought confirmation of the official mark.

A track official even tried to hand him a publicity placard stating ‘world record’, but quite rightly, the Florida athlete was reluctant to accept it until he saw some kind of formal clarification himself.

And then came the realisation. Rounded down by three one-hundredths of a second, the record was his by the smallest of margins. 7.29.

So history was made by the man who had been threatening Jackson's mark every time he set foot on a track this winter. It is just reward for one of the indoor season's star attractions and surely now Aries Merritt's outdoor record 12.80 over 110m hurdles looks within reach.

Another of this year's indoor world record breakers, Ethiopia's Gudaf Tsegay was involved in a mouth-watering duel with compatriot Lemlem Hailu in the women's 3,000m.

After her astonishing 3.53 in the 1,500m in Lievin, Tsegay had a second record in her sights last night, and with Hailu for company this was a proper race, not just a procession of athlete against the clock.

Hailu is the former world youth champion who last week scorched to a big world lead of 8.31.24 and sits 16th on the all-time list in Torun. She was not in this race to be a passenger.

Yet such was Tsegay's confidence in her own ability, several times during the race she turned and motioned for Hailu to hit the front and help sustain the world record pace.

Genzebe Dibaba's mark of 8.16 from 2014 required savage early commitment and they did their best to give themselves a chance.

But every time Hailu duly obliged Tsegay's request, the favourite would retake the lead some 100 to 200 metres later as if not fully satisfied with the intensity of her compatriot's surge!

Despite a brilliant effort from both of them, they gradually slipped behind the pace required, yet they were still on for a very fast time. When Tsegay made her definitive move at the end Hailu couldn't respond.

The teenager hung on for a brilliant sub-8.30 PB in second place, 14th on the all-time list and the overall indoor tour title, whilst up ahead Tsegay finished strongly in 8.22.65, six seconds shy of Dibaba's record.

Yet her demonstrative reaction at the end told us she was expecting more from herself. With a frustrated tap of her head and an obvious frown, she was visibly annoyed when she saw the time. Surely never before would a second-best performance in history have generated such an underwhelmed response! 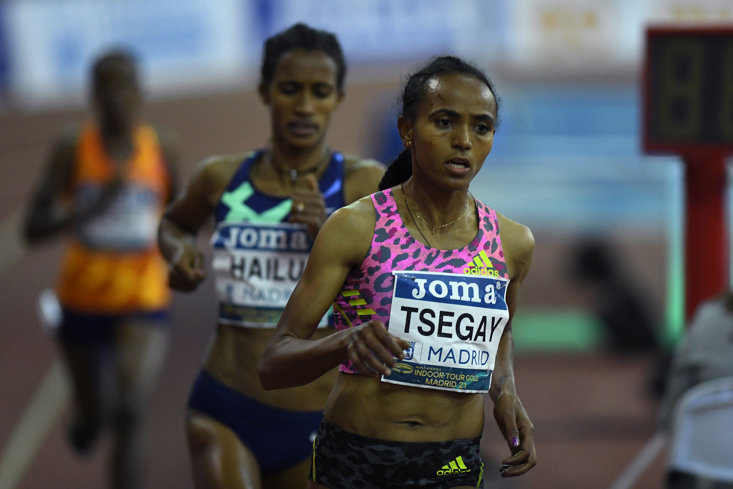 The East African nation's dominance didn't end there. The 23-year-old Ethiopian Habitam Alemu was favourite for the women's 800m and had already guaranteed herself the overall tour title after her huge winning margin last week in Poland where she decimated the field for a 1.58.19 PB.

And an Ethiopian female middle/long-distance hat-trick was completed by teenager Hirut Meshesha, who looked full of promise in winning the 1,500m with ease.

Where the Ethiopian women showed their class in Madrid one of their male counterparts was not to be denied his chance to shine in Spain. The superb 5,000m runner Selemon Barega again preferred a shorter outing over 1,500m and, having run 3.32 for eighth on the all-time list last week in Poland, his decision to step down in distance once more made sense.

Add in to the mix the reigning European Indoor 1,500m champion and outdoor bronze medallist Marcin Lewandowski and this had the makings of a cracking race. Barega was brimming with intent and confidence after that win in Torun, perhaps too much so.

After following the pacemaker for the first few laps, the World silver medallist over 5,000m had a rush of blood to the head, surging past a bewildered Alberto Guerrero after deciding to go for it early. After reaching 1km, he began to pay the price for his exuberance.

A huge lead began to be whittled down as the brave Spaniard Jesus Gomez gave chase. An upset never looked on the cards, but Barega was hurting and had to dig in over the last 300m to ensure the win. A solid 3.35 and the overall tour title was the result, while Gomez was rewarded with a PB in second 3.36.32. A very tired Lewandowski finished fourth.

Their race to the line saw them separated by thousandths of a second, Tuka out-dipping Bosse, both credited with identical new PBs of 1.45.95. Yet that was for second and third respectively, behind the brave Spaniard Mariano Garcia, who was the only one to follow the pacemaker. He surged on the third lap and hung on for a deserved win and a meeting record of 1.45.66.

Earlier this month we were treated to a brilliant duel in the men's two-lap event in New York, as indoor world record holder Michael Norman took on good friend Rai Benjamin, the world 400m hurdles silver medallist. Without the two star Americans in Spain there was an opportunity for others in Madrid and although this wasn't as fast, the race was equally compelling. 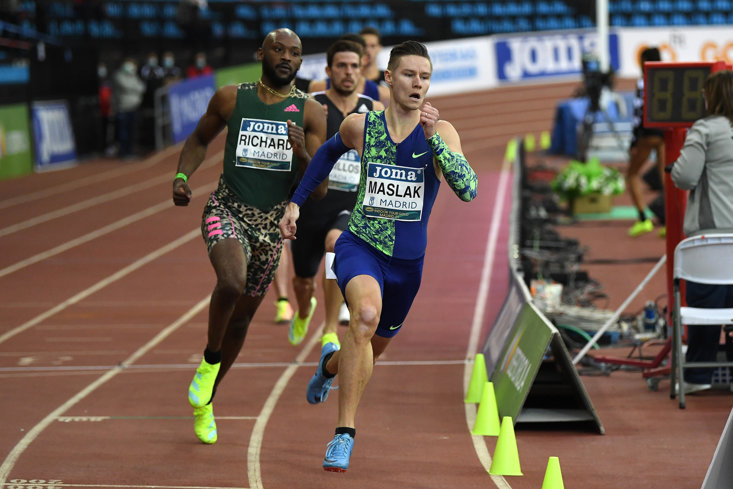 Three-time world indoor champion Pavel Maslak knows the value of holding the inside line at the break, and ultimately that made the difference between him and Tyrell Richard, the 2019 NCAA 400m champion, hanging on to win by two one-hundredths in 46.12.

Dutch national champion Nadine Visser was in total control in the women's 60 metres hurdles, equalling the world lead with a new national record of 7.81 in the final. I can't wait to see what the former heptathlete can do outdoors this summer over the 100 hurdles. And in the men's 60m, Ivory Coast's Arthur Cisse enjoyed another fine win, just finishing ahead of the huge Frenchman Mouhamadou Fall 6.59 to 6.60.

So to the field events. And with Venezuelan world champion Yulimar Rojas absent from the triple jump, 28-year-old American Tori Franklin saved her best till last, taking the win by a single centimetre. Her sixth-round leap of 14.22 pushed long-term leader Patricia Mamone down into second with 14.21.

The star attraction in the men's long jump, Cuban Juan Miguel Echevarria, delivered an early effort of 8.14 which proved to be the best of the night, while Belarussian Iryna Zhuk improved her national record by one centimetre to take the women's pole vault and the indoor tour title with a clearance of 4.67.

The likes of Holloway and Tsegay will now be ready to transfer their indoor form to the outdoor season and hopefully, for all our sakes, all the way to Tokyo.

However, many of the evening's other leading protagonists are eyeing a return to Poland at the start of next month and a chance to finish their 2021 indoor campaigns with a major medal.

And if the European Indoor Championships in Torun prove to be half as good as this Indoor Tour Series has been, Athletics fans will be treated to the perfect climax to this fascinating start to the year.

This great sport is back on the map once again.