Snooker
News
Time and success have combined to transform Ding into an elder statesman for his younger compatriots in the sport
Rob Walker
10:00, 08 Apr 2021

Ding Junhui first won a major title 16 years ago back home as a teenager in Beijing, beating Stephen Hendry to the 2005 China Open title in what turned out to be the great Scot’s penultimate appearance in a Ranking final.

For an 18-year-old to mount a comeback from 4-1 down against the sport’s most prolific world champion was a hugely impressive feat, yet surely no-one back then could have foreseen just how significant Ding’s arrival in the sport would turn out to be.

He added two more titles to his collection before turning 20 and has since moved to the outskirts of Sheffield, creating a new life for himself and his family, becoming an adopted Yorkshireman and taking his ranking event tally to 14 major titles (plus the Masters.)

On the face of it, though admirable, there’s nothing particularly unusual about that journey.

A young sportsman or woman discovers he/she is in possession of a great sporting gift and moves abroad to make the most of that talent, creating a better life for themselves and those around them. Dozens of Elite sports are full of those uplifting stories, but where Ding differs is the impact that success has had at home and what he's done personally to help it.

It is no exaggeration to say that his achievements have inspired a generation of both snooker fans and players in China. Ding is one of the main reasons his country has become such a huge powerhouse in Snooker, both in terms of tournaments taking place there, sponsors found there and the volume of young players coming over to Britain to try learn from and emulate their hero.

He’s been generous with his time and resources here as well, setting up an academy close to his home and regularly inviting young prospects to his own home for meals and mentoring.

Sheffield is a perfect fit for those keen to follow in his footsteps. There is already a large diaspora of Chinese students in the city and a good array of Chinese restaurants and other familiarities to help combat the inevitable homesickness. Put simply Ding is leading by example, forgetting neither where he came from nor the life which snooker now affords him.

If there is one downside to all this, it’s the accompanying pressure which he has now had to bear for more than a decade and a half.  As soon as success arrived and he started delivering triple crown titles like the 2005 and 2009 UK Championship and the 2011 Masters crown, the questions inevitably turned to the Crucible.

When will a Chinese player win the world title? Can you become Asia’s first global snooker champion?

Early on in his career, he just couldn’t get to grips with the world championship and being under a microscope obviously didn’t help. It seemed no matter what he did elsewhere throughout the season, it never quite clicked on his adopted front doorstep. 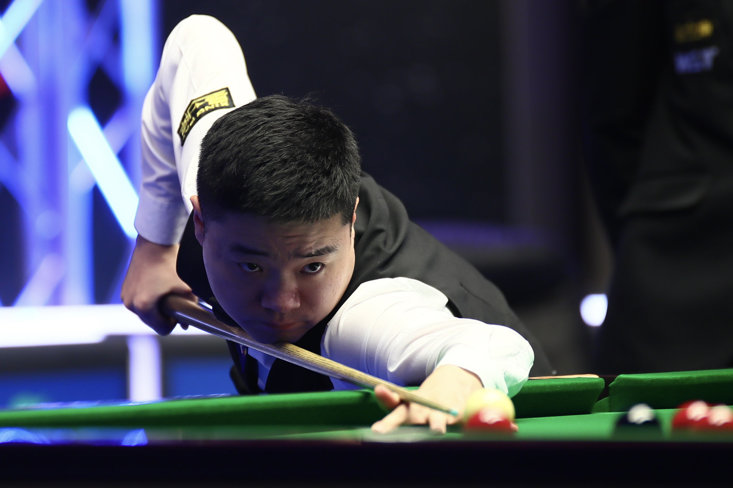 After one early exit I remember people in the press room talking about rumours Ding wasn’t comfortable playing at 10am local time. The theory was that without a disciplined daily routine required for a steady job (and his penchant for playing computer games late into the night), 10am practise sessions weren’t on the radar. Other people just felt the intense pressure from home just got the better of him.

Whatever the reason, he wasn’t delivering. In his first four years he couldn't make it beyond the last 16. His first real glimpse of the title came in 2011, when he made the semi-finals.

Three years later he arrived as one of the favourites, after a record equalling run of winning five ranking titles in a single season, but his extraordinary campaign of 2013-2014 ended with him crashing out of the Betfred World Championships in the first round, losing a decider to the unheralded Michael Wasley.

Ironically, it took a drop out of the world's elite to spark his best run to date. In 2016, his world ranking had slipped to outside the 16 and as such he was forced to go to Ponds Forge (we now play the qualifiers at the English Institute of Sport,) and make it to the Crucible the hard way.

Many people feel the qualifiers present such a gruelling route to the main event, that anyone who comes through that process would be too tired to produce their best if they make it to the business end of the champs and the monster clashes over 33 and 35 frames. The opposite turned out to be the case for Ding.

The shock of having to qualify seemed to sharpen his senses as he conceded just 7 frames en route to the last 32. Promising.

The momentum continued once he arrived at the Crucible and after impressive wins over Martin Gould, Judd Trump, Mark Williams and Alan Mcmanus, Ding charged into a maiden final.

By the time the Sunday afternoon arrived, tens of millions of casual snooker fans in China had started to show an interest and the viewing figures for the match against 2014 Champion Mark Selby were record-breaking.

Selby started brightly leading 6-0, but the Chinese player rallied to 11-10 before ‘the Jester’ pulled away again, eventually showing the class that had seen him come from behind to beat O’Sullivan two years earlier, sealing a second global crown 18-14.

It had been a herculean effort from Ding and he should still be proud of the way he played en route to and in that final.

He didn’t choke, he was simply beaten by a better player over the two days, and his run to get there brought yet more interest from the other side of the world.

The following year Ding made the semis but he hasn't been beyond the quarters since. He added a third UK Title to his collection in December 2019, but hasn’t progressed beyond the last eight of any event since.

Five quarter-finals this season shows he’s found some consistency in the current campaign, but deeper runs don’t look on the cards at the moment. Time and success have combined to transform Ding into an elder statesman for his younger compatriots in the sport and it’s a position he’s clearly growing into.

However with every passing year, the opportunity to make history for China and Asia is becoming a harder and harder prospect. In a funny kind of way it would be the ultimate compliment to this trailblazer if one of his proteges managed to beat him to a maiden world title for country and continent.

But don’t rule Ding out of contention just yet. He is still only 33 and maybe this generous teacher is storing up the ultimate lesson for his eager and grateful pupils.