I’ve never learned the nuances of poker, but if I had to nominate someone from the snooker world to play a hand for me it would definitely be China’s young sensation Yan Bingtao.

The reigning Masters Champion has nerves of steel and never gives his emotions away, even under extreme pressure.

Over the last decade or so we’ve become used to an excellent influx of Asian players following in the footsteps of their hero and trail blazer Ding Junhui and whilst most are quite reserved, Bingtao takes it to another level. But what a talent.

He’s still only 21, so it’s hard to believe it’s already been six years since he won the World Cup with Zhou Yuelong for China, beating the experienced Scottish duo Stephen Maguire and John Higgins in the final. That victory made the snooker world sit up and take notice of both young stars and it also paved the way for them to play in that November’s Champion of Champions, where they both won their first matches.

Bingtao knocked out former World Champion Shaun Murphy 4-2, before succumbing to Neil Robertson in the quarters. Quite some introduction to the senior ranks of the sport.

Amazingly, Bingtao was very close to another slice of sporting history just two years later when a brilliant run to the final in Belfast gave him the opportunity to become the youngest ranking event winner in snooker history at the 2017 Northern Ireland Open. He pushed veteran Welshman Mark Williams all the way, at one stage leading 6-3, before losing a decider.

No record for him then, but winning a ranking title as a teen was not to elude him. At the start of the 2019 season he travelled to the Riga Masters and secured his first major trophy with a 5-2 victory over Mark Joyce. He was just 19.

His next target was closing in on the sport’s elite and joining a select group of Asian players to make it into the top 16 and last year he duly did that. I was commentating on his second appearance at the Crucible last summer and it made fascinating viewing.

He raced to a 7-1 lead over Geordie Elliot Slessor in their opening session. The debutant had failed to settle early on owing to huge disappointment at the news there would be no crowd. However, in their second session, Slessor showed what he was made of with an excellent run of frames and Bingtao came under intense pressure. 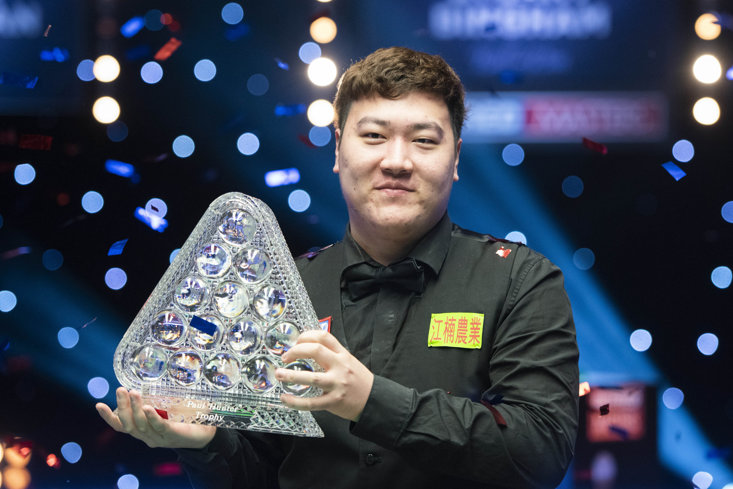 Elliot reduced the deficit to 9-7 before 'the Chinese Tiger' showed great composure to close out the match 10-7. It was tighter than that scoreline suggested and I believe, had Slessor somehow forced a decider, he would have won the match. Bingtao went on to push Judd Trump close in the last 16, losing 13-11 in a tight encounter, but those two matches will stand him in good stead whoever he draws in the opening round this month.

This season his composure has grown further, with runs to the quarter finals of the European masters and Northern Ireland open before the major breakthrough at January’s Betfred Masters. Once again his comfort on the big stage in the pressure moments was evident.

The opening match against Neil Robertson went all the way to a decider and afterwards the Australian, who at one stage led 5-3, paid his young conqueror the ultimate compliment, declaring his tactical knowledge and technical ability to that of a young Steve Davis in his prime. That is quite some comparison.

Amazingly, two further final frame deciders awaited the Chinese player en route to the final. He beat Stephen Maguire in the Quarters and then came from 4-2 down against defending champion Stuart Bingham in the semis.

However, after what John Higgins had shown in the Friday night quarter final classic against O’Sullivan and Saturday’s semi against Dave Gilbert, the Scot was the favourite to lift his first Masters crown in 15 years. Yet even when Higgins led 7-5, there was barely a flinch of emotion or tension on Bingtao’s face.

Whatever was going on beneath the surface, his face was a picture of calm and composure and having edged to within one of the winning line, Bingtao closed out the match and the title with an excellent visit of 64.

Ten years after Ding Junghui had become Asia’s first Masters Champion in the last edition to be staged at Wembley, Bingtao had replicated his hero’s achievement in Milton Keynes. He also became the first player to win the title on a maiden attempt since Mark Selby in 2008. Illustrious company indeed for a young man with the world at his feet and the sport at his fingertips.

There is no doubt Ding has already cemented his place among the sports most significant figures, winning 14 ranking titles and the Masters and paving the way for an entire generation of Chinese players like Bingtao to come and hone their craft in Britain, but the biggest prize of all is the one he’s always being asked about and the one which has eluded him thus far.

Ding came mighty close five years ago after gaining an irresistible momentum coming through qualifying to storm to the final, but world number one Mark Selby closed the door on Ding’s dream and sealed a second global crown 18-14.

I do think China's talismanic player will win more Ranking titles in the future, but I believe it will be the apprentice, not the master, who will become the first Asian player to conquer the snooker’s ultimate sporting mountain in Sheffield.

That’s a big call bearing in mind all Ding has achieved, but Yan is that good. This year may be too soon, but in his own quiet way Bingtao really does have the eye of the tiger. If he gets his poker face on at the Crucible and spies a chance, I don’t think he’ll flinch if history beckons.