Snooker
News
Where Williams is concerned, anything is possible at the Betfred World Snooker Championships
Rob Walker
10:00, 05 Apr 2021

In snooker there is one man who is capable of just about anything and he’ll usually make you smile while he’s doing it.

He could embark on a superb run to this year’s Betfred World Championship final, he could bow out in the first round. He might go for a kebab if he finishes late one night and he might even attend a press conference naked (if he wins the title!) And sometimes he’s so good he can literally pot balls with his eyes closed. You almost couldn't make it up.

Where Mark Williams is concerned anything is possible and of all the players I have befriended after more than a decade on the circuit, he is one of my favourites. He is a truly extraordinary person. Not so much because of the 23 ranking titles he has amassed over 29 years as a professional, but because he has always done things his own way.

From the outside there appears to be a big contradiction with the way the Welshman lives and plays. No matter the match or context, he wanders around backstage willing to talk to anyone, even two minutes before going out to play a huge final. His demeanour is as if he’s at his local club about to do a couple of frames in his favourite tracksuit trousers.

He’ll crack a joke, pick up a paper or ask the tournament director what he’s about to have for lunch. Watching that behaviour just before walking out for a massive sporting occasion live on TV,  you could mistakenly think he doesn’t care about the outcome. But it would be impossible for any sportsman or woman to have won as much as he has without caring deeply about their chosen craft. When he gets out there, you won’t find anyone who tries harder.

Where he is remarkable and utilises that laid back personality brilliantly is when he experiences a bad moment in a match - he has the ability to process it and forget about it instantly. He doesn’t dwell on bad strokes of luck or defeats in matches he should have won. A rare gift indeed. As soon as his involvement in a tournament is over, he’s back to his family in the Welsh Valleys, usually with a tee-time booked for the following morning.

He’s always had an element of that strength in his armory, but that attitude was cemented forever with the finest moment in his career by far – his third world title.

By 2018, nobody (probably including him) would have surely believed that a hat trick of Crucible crowns was possible so long after his first two. Analysing Williams huge list of achievements, you can see he won the vast majority of his 23 titles (including all three big ones twice) over an amazing eight year period starting with his maiden ranking title at the Welsh Open in 1996.

Once he tasted major victory on home soil, he became an irresistible force in the game. 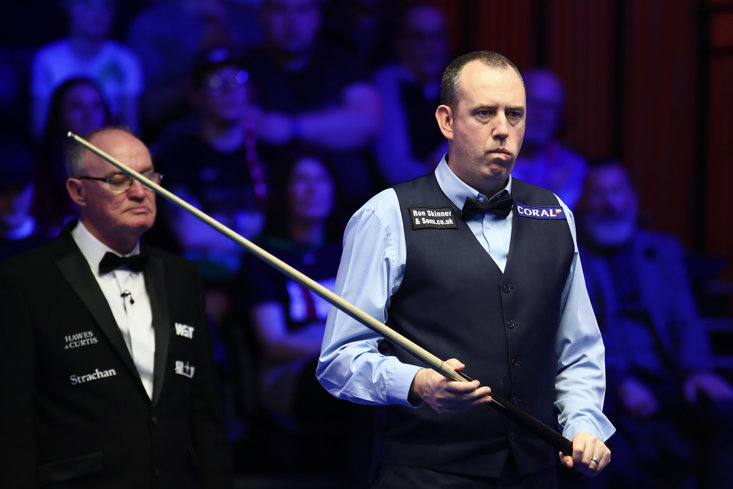 Whether it was a lack of motivation or a busy life with three young sons, after 2003 the relentless run of wins dried up. Three further ranking titles followed but they were spread over the next 14 seasons.

Then he started working with Steve Feeney, the SightRight coach, and on came the second wave. Having been 'stuck' on 18 ranking titles for six years, four followed in the space of twelve months.

It started with victory in the Northern Ireland Open in the autumn of 2017, then came his second German Masters title in Berlin in February 2018 when he thrashed Graeme Dott 9-1.  Even so, few fancied him for that year’s Worlds having not progressed beyond the quarter-finals for seven years.

What a run, though. After comprehensive victories over Jimmy Robertson, Rob Milkins and Ali Carter, he found himself 9-6 down to Barry Hawkins in the semis. He roared back to win 17-15, securing his first appearance in the final for 15 years and teeing up a showdown with his fellow 'Class of 92' contemporary John Higgins.

It was a brilliant final in which he seized the initiative and never looked back. It got tight at one stage after Higgins stormed back from 14-7 down to level at 14 and 16 all. But Willow’s famous nerve held good again to avoid a decider and seal the greatest and unlikeliest world title of his three, and with the same winning scoreline as his first two - 18-16!

When he had last lifted Sheffield’s famous old silver lady in 2003 his wife Jo was at his side. This time he was also flanked by his 3 sons in his iconic winners photo and I honestly believe that completed his aspirations in the sport. Not that he wanted to retire or no longer cared, but having spoken to him numerous times about this, it’s clear nothing else he does will ever top that 17 days and as a result he has nothing left to prove to anyone including himself. That makes him a very dangerous opponent.

Nowadays he admits to practising around two hours a day instead of six or seven, but such is his class it will still bring him the odd deep run - and title - as he showed securing the inaugural Pro Series title on his 46th birthday last month.

He had been tied with Judd Trump as the joint most decorated left handed player to ever grace the sport with 22 major victories. Once again he now holds that title all by himself. Can he keep a magnificent run going for 17 days this year? He himself says it’s doubtful.

But is he capable or ruffling a few feathers at the 2021 Betfred World Snooker Championship? Without a doubt.

Whatever happens on the table in Sheffield, within 10 minutes of finishing his media commitments, he’ll already be thinking about a round of golf with one of his sons the next day and a summer off back home. Life’s rosy for Willow these days. He knows it and he’s earned it.

Beware the man who has nothing to lose.