Snooker
News
Ahead of the World Snooker Championship, Murphy is professional enough and talented enough to know that at his best he can still deliver
Rob Walker
10:00, 10 Apr 2021

Shaun Murphy is always introduced as being a class act on and off the baize. And he is.

Immaculately dressed, winner of all three Triple Crown events (plus the prestigious Champion of Champions) and a stickler for the unspoken etiquette of the sport. He is the complete package who has made a massive contribution to our sport since he scorched his way to the world title as a baby faced 22-year-old qualifier 16 years ago.

As you would expect, a lot has changed for Murphy since that fairy tale run of 2005. The 38-year-old is now a husband and a father to two young children and on top of all the joy and time management that requires in a modern household, the whole family moved back to his wife’s native Ireland.

Exciting plans of a new family home were embarked upon with the Murphys staying in an apartment whilst renovations were completed. Then came COVID and everything stopped.

Of course, building a new home is a nice “problem” to have and at no stage has Murphy lost sight of that, but being in the city centre with two very small children and no outside space coupled with losing his ability to continue his day job was tough. He’s never moaned about that, but he has been refreshingly honest about what he’s found hard.

Snooker is more of a way of life than a sport for many professional players. Even for the most naturally gifted, honing their craft devours time on a daily basis and suddenly losing that balance leaves a huge hole in their daily rhythm and routine.

Snooker players are no different to anyone else. The pandemic has hit some harder than others and at times ‘the Magician’ lost his equilibrium. Things improved as Barry Hearn was determined to get the show, if not back on the road, then back on the telly and we all began to gather in Milton Keynes for a multitude of events behind closed doors. It was a funny time for all of us in the sport.

Many of us know each other fairly well and have done for years, but there is usually a lot of choice as to where to stay, so normally we are spread out across a host city or town in a variety of hotels, B&Bs and apartments. But in the confines of a strict bubble set up, we all found ourselves spending a lot of time together, taking solace in each other’s company and opening up about what we had missed and found hard during lockdown.

Shaun felt as if part of his identity was missing when he couldn’t do his job.He has been known as a snooker player since his formative teenage years and suddenly he didn’t feel like he was anymore. 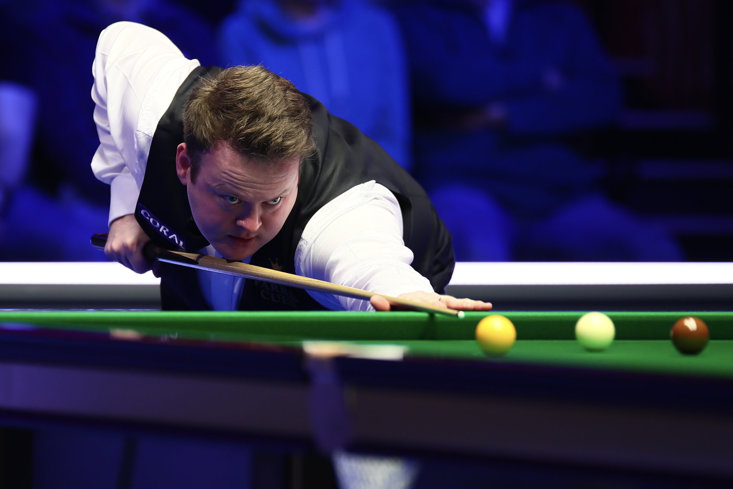 As an element of normality began to return last summer, slowly and surely he found his way back to a positive place again. The house project was going in the right direction and all was good. Then came the autumn and the complication of quarantine and isolation.

In between trying to scale the rankings and win titles again, life got tricky for all the overseas players.

With ever changing rules and different countries applying different restrictions, players like Shaun and Ken Doherty were left trying to work out whether they had time to go home to Ireland, see their families, serve their self isolation and still make it back in time for the next tournament.

The result in many cases was to either miss a valuable tournament, or spend endless days in self isolation in Milton Keynes, waiting to pass another test and the next event to begin. Shaun missed huge chunks of time at home and his form was suffering.

He’s since come to terms with that loneliness, but I do think the overseas guys have had a really tough juggling act this season in particular.

Nonetheless he is professional enough and talented enough to know that at his best he can still deliver, so he set about making the best of an awkward season. After a run to the semis of the European Masters in September, the rest of the autumn offered slim pickings for the nine-time ranking event winner.

He has, however, made two quarter-finals since the turn of the year, defeating Mark Williams to make the last eight at the Masters and replicating that run at the Welsh Open in February with victories over Barry Hawkins and shootout champion Ryan Day.

Not having the most fruitful of seasons meant he did not qualify for the Players Champs or Tour Champs this spring, giving Murphy more time at home with the family than he would normally expect at this stage of the season. Every cloud...

Since Christmas he’s also embarked on a competitive diet against MC Phil Seymour in a bid to see who can slim down the most and become Snooker’s “biggest loser.” All positive signs.

So what about Sheffield and this year’s Betfred World Snooker Championships then?

Many people forget that Murphy is a three-time Crucible finalist, having finished runner up to John Higgins in 2009 and then losing out to Stuart Bingham in 2015, ten years after winning the title.

The Bingham defeat in particular really hurt. He was in brilliant form that year and started as favourite. Despite his promising lead of 8-4, Bingham simply played the best snooker of his life over that whole 17 days and came through to win 18-15, denying Murphy the chance to join a select group of multiple winners.

Surprisingly, he hasn’t made it beyond the last 16 since, and for a player who sets such high standards for himself, that’s a disappointing run he’ll be desperate to stop. With such a strange backdrop to his season though, and with everything that has gone on for him away from the table, it is impossible to tell how Murphy will go this year.

To be honest, it would just be nice to see him playing with a smile on his face again. If that happens, the results will surely follow.