If you are trying to pick a favourite for this year’s Betfred World Snooker Championship based purely on current form, then look no further than Australian Neil Robertson. His performance against Ronnie O’Sullivan in the last major event before the season finale was extraordinary.

If you didn’t manage to see any of it live on ITV, it’s worth looking up the second session of the Tour Championship Final. An evening during which the sport’s most decorated player in history was reduced to the role of sole spectator.

That’s not meant as a sign of disrespect to O’Sullivan. Robertson was just that good.

They had resumed at 4-4 and we were all set for a night of high drama at the Celtic Manor. As it turned out, instead of high tension it was high quality and all of it from the man from Melbourne.

Robertson won six frames without reply to wrap up his 20th ranking title with three centuries that evening and eleven across the week. Quite some achievement for a player who was relegated from the Tour first time round on his 20th birthday.

Along with Marco Fu and Ding Junhui, Robertson has been one of the sport's most important global ambassadors and he’s done so thousands of miles away from the family with whom he’s still so close.

As far as his preparations for the World Championships were concerned, his victory in Wales rounded off the rest of the season in fine style and it means the 39-year-old arrives in Sheffield as the reigning champion in two of the sport’s biggest titles, having also beaten Judd Trump in the early hours of an atmospheric December Monday morning for a third UK Title.

After that dramatic victory, Robertson deliberately prioritised family time, appearing sparingly for the remainder of the current campaign. Not many players have the confidence to do that, but after banking a cheque for £200,000 for the win (and accompanying ranking points), he knew he was guaranteed to make the Tour Champs and this approach has reaped dividends.

He and his family have clearly benefited as a result of him spending time away from the sport. The pride with which he speaks about his son Alexander in particular oozes out with every word. He is a polite young lad who is a credit to his mum and dad and they spend a lot of time together in the garden working on the promising goalkeeper’s skills. 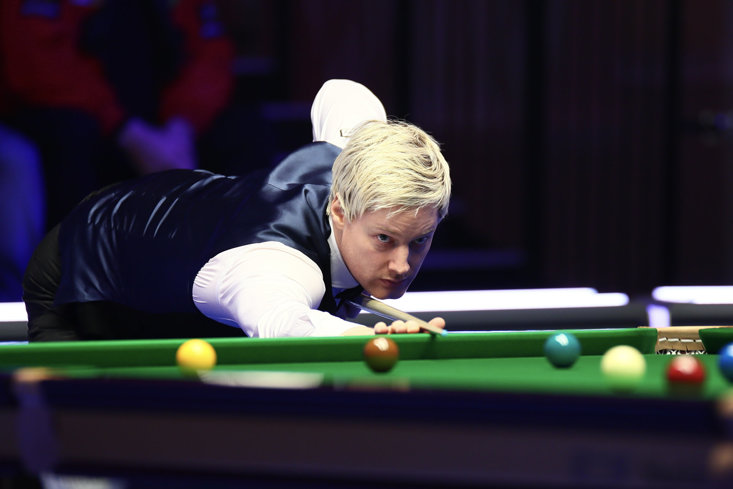 Neil is also not afraid to speak his mind or show his feelings and when asked about taking a break he is unapologetic and rightly so. He simply felt that his son was missing his friends at school and needed his dad more than snooker did.

With everything settled and an element of normality now returning at home, he headed back to the practice table and arrived at the Celtic Manor fired up at the end of last month. The event for the top eight on the One Year List may still be in its infancy, but it is quickly becoming one of the must win tournaments on the calendar.

Robertson looked superb as he beat Jack Lisowski in the quarters and then swept past Mark Selby 10-3 in the semis before that 10-4 hammering of Ronnie in the final. In terms of who he beat and how he beat them, it ranks as one of his finest nights in the sport.

Behind the scenes another reason for his great form came to light after one of the most emotional interviews I’ve seen with a current snooker player. World Snooker Tour have several excellent young journalists on their website and social media team and when Sam Fletcher and Roddy Bisset sat down to do an early Crucible preview at the Celtic Manor they were stunned when “Robbo” almost broke down crying.

Unbeknownst to him, whilst he was busy helping with Alexander and Penelope at home, his fiance Mille was writing to the Australian government. Detailing all that Robertson has done for the country, she was asking for special dispensation to be made in order for Neil’s dad to be allowed to fly over and join their family bubble in Cambridgeshire.

With the obvious current international travel restrictions, the family had not been able to make their annual trip back Down Under and it turns out Alexander was not the only Robertson son desperately needing time with his dad.

Initially the authorities rejected the request, so Mille wrote back again with an even more detailed breakdown of the left-hander's CV and contribution to the sport. It worked and Ian duly arrived as a total surprise the day before Robertson left for the Tour Champs.

It is hard to watch that social media clip in which Robertson opens up without getting emotional and it helps explain just how well the World number three played that week.

So does that mean he lines up as one of the favourites for this year’s Betfred World Snooker Championship? Without a doubt.

Considering he is seventh on the all-time list with those 20 ranking titles (including three UK Crowns plus the Masters and two Champion of Champion trophies), many people would have envisaged other world titles would surely have beckoned after his ultimate moment of victory against Graeme Dott in 2010.

There have been several years in which he has arrived in Sheffield in sensational form only to fall short. Based on what we’ve seen this season and over the last month, I don’t think that will happen this time.

He can have no better motivation than his dad being in the socially distanced crowd this year and it feels like it’s going to take an epic performance from someone to stop him.

It's sometimes said that snooker lacks the characters of the old days. That's a lazy and outdated view. Robertson's literal and metaphorical journey to sporting greatness has been a long one and though he's more likely to drink pints of smoothies than beers, his story is no less compelling for it.

If he somehow does it this year and joins a select list of multiple world champions, expect tears. Following this proud Aussie could be an emotional ride this year!