Football
News
The striker could be off this summer, and few fans could begrudge him a fresh start
Kris Voakes
19:56, 19 May 2021

All the talk beforehand was about Harry Kane, and whether Tottenham Hotspur can persuade the England captain to stay at White Hart Lane or be left contemplating a gaping hole in their forward line from next season. But by full-time of their 2-1 home defeat by Aston Villa on Wednesday, Spurs’ returning fans will have been left infinitely more concerned by the countless gaps evidenced in their side’s defensive half.

While Kane’s future is naturally a topic of intense discussion, to focus too much on the striker’s influence is to ignore some of the fundamental flaws in this Spurs squad. Jose Mourinho might now be long gone, but his sacking was never going to be a quick fix for a club missing real ability on the ball across the defensive and midfield thirds and lacking big-game smarts at key moments.

It will take more than a new manager to put things right, and any top-level coach with half a mind to make themselves available for the job will have been watching this and seriously reconsidering. Steven Bergwijn’s opener should have been the springboard to a celebration between players and fans, reunited after 14 months apart due to the Covid-19 pandemic. Instead it was simply a prelude to a Sergio Reguilon horror show.

Bergwijn got Spurs off to a flier in the eighth minute, pouncing on Marvelous Nakamba’s poor touch to drive forward, hold off both Nakamba and John McGinn, then rifle the bouncing ball into the roof of the net. But the early ascendancy was handed back to Villa in two moments of madness from Reguilon.

First the Spaniard somehow skewed a clearance from a left-wing cross past Hugo Lloris from 12 yards for a spectacular own goal, then he twice failed to clear the ball beyond Bertrand Traore, allowing Ollie Watkins to collect possession inside the 18-yard box and beat Lloris at his near post. 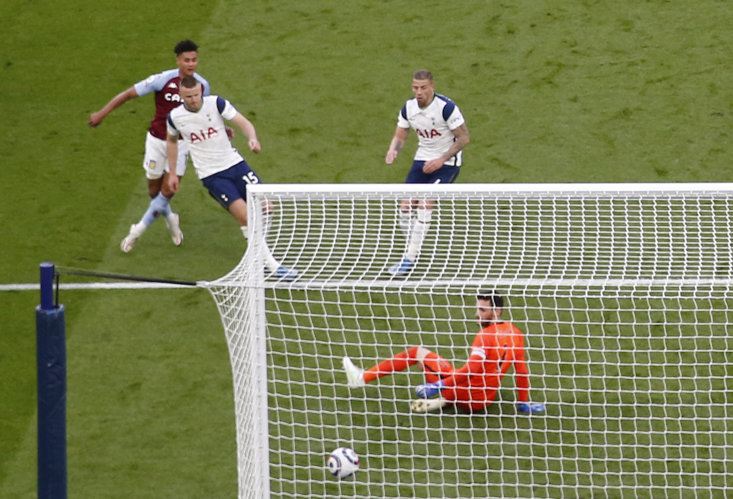 To be fair to Reguilon, it just so happened that it was his mistakes which cost Spurs. It could so easily have been someone else such was the volume of occasions on which the home side handed easy possession to Villa in dangerous areas. The visitors had a total of 20 shots, and on another day they could easily have scored five or more. With Harry Winks preferred to Tanguy Ndombele and Giovani Lo Celso to the chagrin of many Spurs fans, there was always likely to be a sense of impatience coming from the stands, and Ryan Mason has won himself few new supporters with some of his team selections in recent weeks.

On the evidence of this and other games, you can well imagine why Kane would want to up sticks and leave. Sure, if he stays he could become a true club legend, and collecting even a single trophy would more than justify any decision to remain at White Hart Lane. But surely there’s only so long even the biggest Tottenham supporter would stick around if their quality was so obviously undermined by what is being delivered behind them.

When Daniel Levy comes to sit down with Kane and give him a list of reasons not to leave, Champions League football will no longer be on the table (any European football at all is still not guaranteed), and surely he can’t speak of any great quality in this Spurs squad beyond Son Heung-Min and keep a straight face. Levy and the board are going to have to seriously improve the playing staff if Kane’s ability is to be best utilised, and any hesitation about doing so can surely only result in their talismanic front man heading for the exit.

He deserves far better than this.