Boxing
News
If Fury and Ngannou fight, they will be following in some famous footsteps
Joey Mills
21:13, 09 Jan 2022

Boxing and UFC’s world heavyweight champions have been exchanging fighting talk on social media this week. Tyson Fury and Francis Ngannou have been stirring up interest in a potential cross-codes clash. While two champions of their respective sports have never met in such a match-up, there has been a number of boxing vs MMA battles down the years. Here’s a round-up of some memorable meetings through the years, starting with the battle that pretty much paved the way for MMA as we know it. 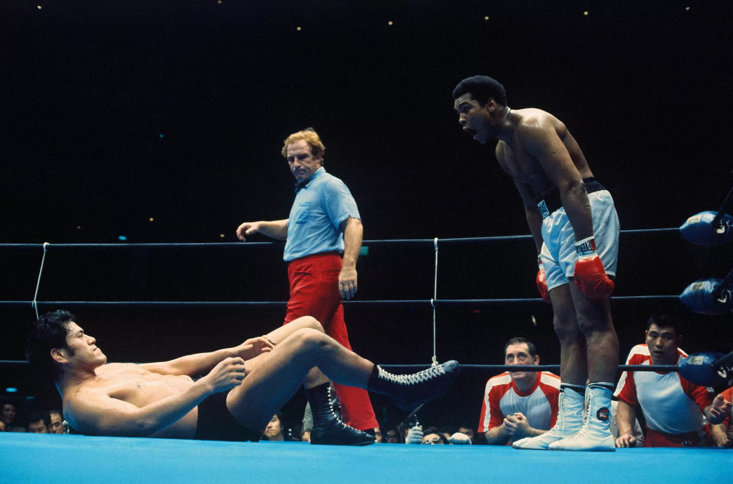 ali vs inoki was the big bang for mixed martial arts

The ‘Avatar’ of fights, this boxer vs wrestler battle is remembered more for its cultural impact than its content. Inoki was the star and owner of New Japan Pro Wrestling, but his martial arts background was very much real. A fight with reigning world heavyweight boxing champion Muhammad Ali was the genesis for the cross-codes world of MMA.

The fight itself was a dud. Inoki lay on the mat, fearful of Ali’s punching power, and kicked at the legs of ‘The Greatest’. Ali would not go to the ground as he was similarly wary of Inoki’s mat techniques, as well as putting his head too close to the Japanese star’s educated feet. The result was a time limit draw, but the melding of styles would inspire others to integrate boxing and martial arts for generations to come.

In 1993, a tournament was held in which eight practitioners of different disciplines met in a competition to determine the best combat system. The event was the Ultimate Fighting Championship, the debut show from a company that would evolve into the modern UFC.

The maiden tournament featured boxer Art Jimmerson, who wore a single boxing glove into the Octagon cage to face Brazilian Jiu-Jitsu legend Royce Gracie. The 28-5 light heavyweight was a solid fighter, but not among boxing’s elite. Gracie on the other hand was from a storied family of legendary martial artists, and was taking the first step in a Hall of Fame MMA career.

Jimmerson was submitted in two minutes by the dominant Gracie, and he never got a chance to use that glove. ‘Zorro’ would never take part in MMA again, instead returning to boxing where he retired with a 33-18 record that saw him share the ring with multiple former and future world champions. To UFC die-hards though, he will always be ‘One Glove’.

By 2010, UFC had become a phenomenon. The company’s biggest events were outdoing on pay-per-view, and the original multi-discipline tournament had birthed an entire genre of hybrid combat that combined the best of every discipline.

While the first UFC had attracted a mid-level boxer in Jimmerson, by 2010 they had caught the attention of the elite. Three-weight world champion James Toney took up the challenge to cross-over from boxing and fight the legendary Randy ‘The Natural’ Couture.

One of the great throwback fighters of his era, Toney fought like a man who thought his punching power would be enough. Against a former NCAA Division 1 wrestler in Couture, he never stood a chance. ‘Lights Out’ was taken down easily, exhibiting a lack of even basic wrestling defence training, and Couture easily maneuvered him into a triangle choke for the submission win.

Toney’s single-minded approach might have served him better in the prehistoric simplicity of UFC 1, but in the age of the complete combat athlete, he was a man out of time. 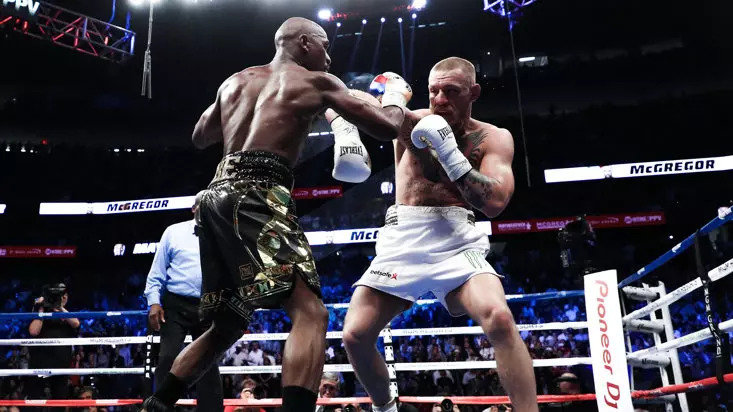 The biggest meeting of boxing and martial arts since the pioneering Ali-Inoki, reigning UFC lightweight champion met the best boxer of the decade. Unlike Toney and Jimmerson’s bouts, this would be a sanctioned boxing match.

The 49-0 Mayweather meeting a McGregor making his boxing debut did not stop the fight being a financial juggernaut at the box office. The event was entertaining enough, with McGregor doing better than expected. This was helped by the fact Mayweather, who had been out of the ring for two years, employed a rope-a-dope technique and allowed the UFC star to take the initiative.

When Mayweather went up through the gears, he had little trouble stopping ‘Notorious’ in the tenth round. McGregor emerged with more credit than most other fighters crossing over into a different sport, but it remains his only boxing match to date. 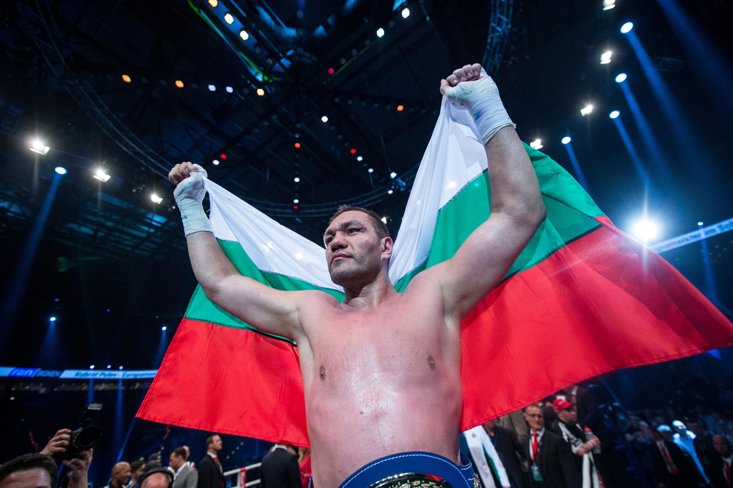 Why stage one boxing vs MMA clash, when you can put on a whole card’s worth? This was certainly Triller’s attitude when they devised Triad Combat. The concept features a triangle ring, and a hybrid ruleset designed to accommodate fighters of both disciplines.

The follow-up show is scheduled to feature Pulev against another former UFC heavyweight king in Junior dos Santos, as well as a co-main event between Vitor Belfort and former world cruiserweight champion ‘Bad’ Chad Dawson.

x
Suggested Searches:
Manchester United
Liverpool
Manchester City
Marcus Rashford
Premier League
More
boxing
The Baddest Men On The Planet: Francis Ngannou And Ciryl Gane...
UFC Heavyweight Champion Francis Ngannou will clash with Interim Champion Ciryl Gane this Saturday in [ ... ]
boxing
When Roberto Duran Proved He Was Boxing's Greatest Ever Lightweight
Weeks away from immortalising himself as the greatest lightweight to ever step foot inside the [ ... ]
boxing
Rematch Of 2019’s Fight Of The Year Inbound? Five Boxing Stories...
We could be getting a sequel to 2019’s Fight of the Year, Francis Ngannou is eyeing up Tyson Fury [ ... ]
boxing
Everything You Need To Know About Gary Russell Jr Vs Mark Magsayo
WBC featherweight champion Gary Russell Jr will fight for the first time in two years on Saturday, as [ ... ]
boxing
On This Day: Roy Jones Jr Turns On The Old Magic Against Felix...
Boxers don’t always face off when we want them to. Unlike other sports, where league systems or [ ... ]
boxing
As He Faced The Son He Cast No Shadow: Chris Eubank Jr. Must...
Chris Eubank Jr. takes on Liam Williams in the year’s first big domestic dust-up next month at [ ... ]
boxing
''I Shook Up The World!'': The Moment Cassius Clay Truly Became...
On what would have been his 80th birthday, it is only appropriate to pay tribute to the cultural icon [ ... ]
boxing
Terence Crawford Sues Top Rank, Five Boxing Stories You Might...
It’s been another busy week in the world of boxing which has seen lawsuits, new signings and some [ ... ]
boxing
Heavyweight Frazer Clarke To Make Professional Debut On Khan...
Frazer Clarke will make his professional, Sky Sports and Boxxer debut on the undercard to the highly-anticipated [ ... ]
boxing
Brand New Heavies: There's Big Men Beyond Fury, AJ, Usyk and...
The heavyweight division is as stacked as its been at any point since the 1990s. In Tyson Fury and Oleksandr [ ... ]
boxing
World Titles And Returning Kings: 2022 Could Be A Year Of Welter...
The first big welterweight clash of the year is close to being confirmed, as WBC and IBF champion Errol [ ... ]
boxing
On The Regular: The Ridiculous History Of The WBA Regular Heavyweight...
If you’re a long-time boxing fan, you’d be forgiven for thinking the abbreviation WBA stands [ ... ]
boxing
Lawrence Okolie To Move To Heavyweight? Five Boxing Stories...
It’s been a busy first week of 2022 in the world of boxing with Lawrence Okolie looking to mount [ ... ]
boxing
Undisputed Showdown With Fury Would Be Historic Night For Boxing,...
Unified heavyweight champion Oleksandr Usyk could face Tyson Fury in a unification clash instead of [ ... ]
boxing
The Sportsman Boxing Power Rankings: January
The Sportsman Boxing Power Rankings is a monthly series ranking boxers on a number of factors to determine [ ... ]
boxing
Floyd Mayweather Lines Up Exhibition With YouTuber Money Kicks
50-0 boxing icon Floyd ‘Money’ Mayweather is set to return to the ring once again in 2022. [ ... ]
boxing
Ortiz vs Martin Can Prove Boxing Doesn't Have To Be Elite To...
Exciting sport is not solely predicated on the elite meeting the elite. While clashes of the world’s [ ... ]
boxing
Boxing's Biggest And Best Knockouts Of 2021: Featuring Fury,...
It’s been a busy half-year of boxing for me, finally getting back out on the road after the various [ ... ]
boxing
Andy Ruiz Jr Next For Tyson Fury? Five Boxing Stories You Might...
The fights may have slowed down to give everyone a Christmas break, but boxing’s powerbrokers [ ... ]
boxing
The Kings & Queens Of Promise: The Boxers To Watch In 2022
2022 already promises so much on the boxing front. Saul ‘Canelo’ Alvarez is set to move [ ... ]
boxing
Five Fights We Want In 2022: Will We Finally See Fury Vs AJ...
What a year it’s been inside the squared circle in 2021. We saw Saul ‘Canelo’ Alvarez [ ... ]
boxing
Where Are They Now? The 2005 ABA National Championship Winners
The roll call of the 2005 ABA National Championship is utterly stacked with talent. The 119th iteration [ ... ]
boxing
Her Ring Too: Women’s Boxing Set For Bumper 2022 After Thriving...
2021 was a banner year for women’s boxing. We saw thrills and spills, upsets and dominations. [ ... ]
boxing
Make Boxing Day 'Boxing' Again: The Fights To Watch This 26th...
Your internal organs are 60% turkey, your Nan made you watch the Queen’s speech and you had to [ ... ]
boxing
Move Over Die Hard, Rocky IV Is The Ultimate Underrated Festive...
“Is Die Hard a Christmas film?” It’s a debate that has raged and swirled around this [ ... ]
boxing
Jake Paul Vs Former Middleweight Champ? Five Boxing Stories...
Errol Spence will find himself in an early unification fight next year, Triad Combat is somehow returning [ ... ]
boxing
The Sportsman Boxer Of The Year - Saul 'Canelo' Alvarez
It’s been quite a year in the squared circle. Trilogies have reached their brutal conclusion, [ ... ]
boxing
The Sportsman Boxer Of The Year - Number 2: Oleksandr Usyk
It’s been quite a year in the squared circle. Trilogies have reached their brutal conclusion, [ ... ]
boxing
The Sportsman Boxer Of The Year - Number 3: Tyson Fury
It’s been quite a year in the squared circle. Trilogies have reached their brutal conclusion, [ ... ]
boxing
UFC Legends, Boxing Superstars Or His Own Brother: What’s Next...
Jake Paul moved to 5-0 (4) with a sensational sixth round stoppage of Tyron Woodley on Saturday night. [ ... ]