Antoine Griezmann is the all-conquering manager of Newcastle United, with five titles under his belt in a single season in 2026/27 and the power to attract his compatriot Kylian Mbappe to the cold of the north-east of England for a mere €134 million.

That’s in his now well-documented Football Manager career mode save, of course, but in the real world he’s still a world champion and a key man for the 9/2 favourites to win Euro 2020. On Tuesday he gets the opportunity to show that his troubles at Barcelona since his 2019 transfer from Atletico Madrid will have no influence on him as he aims to lead France to European Championship glory.

Griezmann scored a penalty and assisted two more goals in Les Bleus’ 4-2 World Cup final win over Croatia back in 2018, winning the Man of the Match award to cap off a tournament in which he had played a massive role in Didier Deschamps’ side. While Mbappe was the breakout star, N’Golo Kante the workhorse and Paul Pogba the inspirational voice in the France squad, Griezmann was the player who kept delivering in big moments with a cool head and that trademark dynamism.

Three years on, he will be looking to have a similar effect as France look to become only the third reigning world champions to win the Euros, and the first country ever to achieve the feat twice. Their campaign begins on Tuesday against a Germany side looking to repair its reputation after a disastrous 2018 World Cup campaign which saw them beating by both Mexico and South Korea on their way to a first group-stage exit in 80 years.

Griezmann was the difference when France knocked Germany out of Euro 2016 at the semi-final stage in Marseille, too, scoring twice for a side which seemed destined to lift the Henri Delaunay Trophy on home soil only to be undone by Portugal in the final. Still, this is a true golden generation of French football and the 30-year-old could hardly be more central to their successes.

All of which makes his difficult Barcelona spell even more unfortunate. Amid claims of a rift with Lionel Messi, Griezmann has often had to sit on the sidelines watching on as a club which was so recently untouchable in Spain and Europe alike has struggled to leave an impression on either front over the last two years. 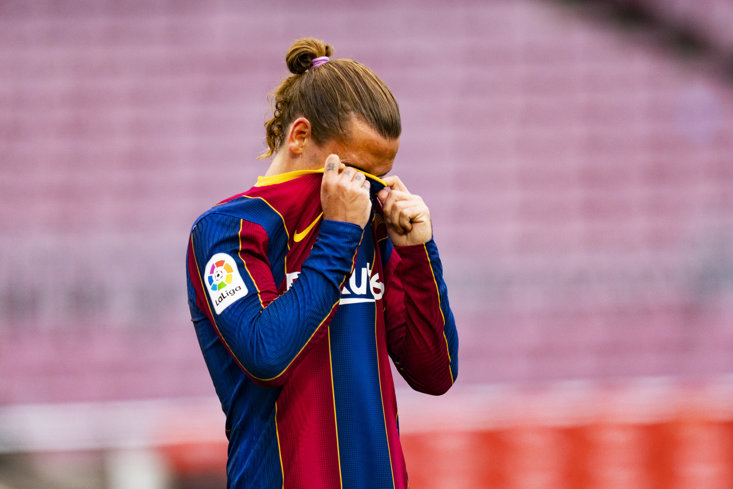 GRIEZMANN HAS STRUGGLED TO HAVE AN IMPACT AT BARCELONA

“Yes, [I was unhappy at Barcelona this season],” he told L’Equipe recently. “When you lose the title, for example, it makes me sad.

“Also, at the beginning of the season, because I wasn’t playing I didn’t feel important. I’m used to playing everything – the big games – and I found myself on the bench against Real Madrid.

“It’s frustrating to see teammates warming up on the pitch while you are next to them, but these are the coach’s decisions and I have to accept it and do everything I can to change his mind.”

In truth, Barca have simply failed to get the best out of a player who was stunning at Real Sociedad, superb at Atletico and has flourished in France’s best era for 20 years. So it would be hard for Barca coach Ronald Koeman to ignore if Griezmann was to deliver another star turn over the next four weeks for France. How often do we see a star player struggling at club level but excelling for his nation?

His €120 million move to Camp Nou remains the fifth most expensive transfer of all time, and it is up to Barca to make the most of that money by getting the very best out of an absolute diamond of an attacker. In the meantime, he has all the motivation in the world to get the job done with Les Bleus between now and 11 July.