This was an all too familiar feeling for Evertonians this season, dropping more points at home against teams they simply have to beat if they are to realise any European ambitions. This time it was Crystal Palace. Leading courtesy of a glorious James Rodriguez finish, the Toffees found themselves in a sticky situation and had to settle for a point when Michy Batshuayi scored an 86th minute equaliser to draw 1-1.

Going into the game Everton were favourites and that seems to be where the issues arise.

Here, at home to the Eagles, is the sort of fixture which has dented the Blues top four aspirations all campaign. Sure, they ended a 21-year-wait to finally beat Liverpool at Anfield and produced a brilliantly industrious performance to win at Tottenham on the opening day. They have gone to Leicester, Leeds and Wolves and come back with all three points.

It is at their beloved Goodison though where they have tripped up losing to Burnley, Fulham, Newcastle, Leeds and West Ham. This time, they dropped a further two points to a side in the bottom half of the table.

Previously, they’ve struggled to get going, bereft of any real cutting edge against lesser sides. On Easter Monday, it was different. The start of the game, at least. Ahead of Palace’s visit, manager Carlo Ancelotti spoke of the need for his side to turn their home form around. He got a response of sorts. Everton were not clinical and far from accurate even but they toiled and attacked and got the goal.

Everton supporters had just reason to worry at half-time, however. Having seen their team miss a glut of first-half chances, a stat lingered. The Toffees had not scored a second half goal at Goodison Park since Dominic Calvert-Lewin netted against rivals Liverpool way back in October 2020.

Richarlison squandered two glorious chances while Calvert-Lewin should have done better with a follow-up. They had the chances and were able to create but they just couldn’t force the ball between the two posts and past the white line during the first 45 minutes. Goalkeeper Vicente Guaita was standing tall and wasn’t fazed by what Everton had to throw at him. 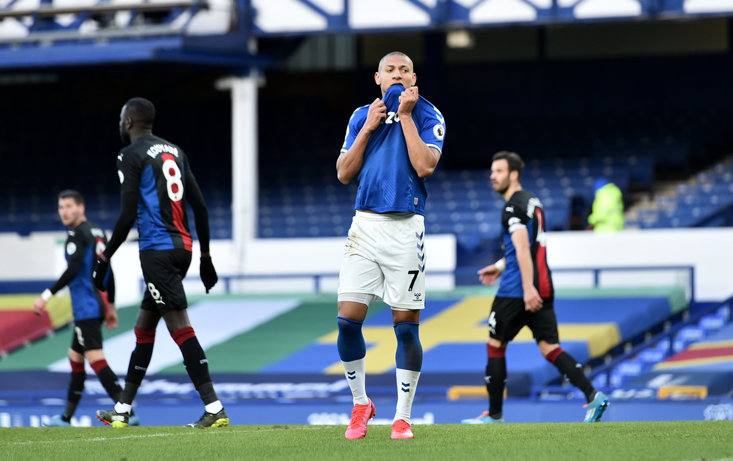 RICHARLISON AND EVERTON ENDURED A FRUSTRATING EVENING IN FRONT OF GOAL

However, Blues needn’t have worried. Why would you when you have the supreme talent of James Rodriguez in the side? Returning to the starting line-up for the first time since February, the magical playmaker finally found the breakthrough on 56 minutes, scoring with aplomb to give Everton the lead.

After neat work down the left by Lucas Digne, the Frenchman combined with Richarlison and crossed into the area for Gylfi Sigurdsson to shoot but his effort  was diverted to the far post by Guaita. The advanced Seamus Coleman was able to keep the play alive though and with a quick look up spotted James in space who drifted to the edge of the area and slotted a shot home via a nick off the post. It was thread-of-the-needle stuff and a finish only players boasting world-class skill are capable of.

Most would have lashed at it, taking a whack and hoped for the best. Not the Everton star, though. James sees what others don’t and spotted the gap and passed it in with ease. The six-month long second half Goodison hoodoo was over and Everton had their goal.

With ten minutes to go, Richarlison almost got the goal which had so far eluded him but his downward shot bounced into the ground and up for Guaita to palm away. Seconds later, the Palace goalkeeper denied the Brazilian again with an almost identical stop. It wasn’t to be Richarlison’s day and his name was left off the scoresheet. As it proved, it wasn’t to be Everton's day either.

With five minutes remaining, the Blues were easily carved open by two quick, forward passes. The ball was given to Batshuayi, introduced from the bench only a minute earlier, and the Belgian kept his composure to hammer home a left-footed strike to tie the score.

“We have to make up the two points we lost here. We lost two points on our mistakes, we were not unlucky,” Ancelotti said after the game before ruing the missed chances. “We were not able to kill the game when we had the opportunity. Our strikers were clinical in the past but tonight they could do better.”

Victory would have moved Everton to within two points off fourth place with a game in hand. Alas, they are now four points behind Chelsea and only have themselves to blame after being so wasteful in front of goal. Come May, they will no doubt regret a massive tally of dropped points on their own turf should they fail to qualify for Europe.

Home sweet home? Goodison Park is not, not this season..